Idealism can only take you so far . . . and at least two of these teams have gone as far as they will with their current core players.

The South East division is a competitive mess. There are two Top 5 East teams here in the Miami Heat and the Atlanta Hawks, but then after a significant drop off in quality you have three following lottery teams in the Charlotte Hornets, Washington Wizards, and Orlando Magic. That's not to say that those teams are bad. Far from it. The SE guys can win any night they step out on the court in the NBA. It's just that they've not had the seasons they expected. And as a result, that may be a motivating factor to make a move. Especially for two of these teams. 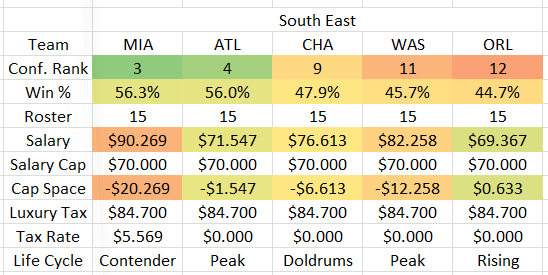 The Miami Heat want to win a championship. They've won three, and that's just not enough. (Somehow...) They have a solid team that plays slow and plays defense. As a result, they aren't hurting themselves, as they have a lot of miles on the legs of their best players. Their point guards Goran Dragic and Mario Chalmers are 29. Their wings Gerald Green and Luol Deng are 30. And their highest name recognition players are Chris Bosh (31), Amar'e Stoudemire (33), and Dwyane Wade (34). Even their emergency bigs are old: Udonis Haslem is 35 and Chris Andersen is 37. Ideally I should have listed this team as a team with a closing window, but still have them as a contender in the East because it's not just old guys. It's many old guys, but that's just Florida for ya. (Yes, a retirement community joke.) Hassan Whiteside is in his mid 20s and coming into his peak, and rookie Justise Winslow is getting better and better every week. And he's still a teen. They even traded for Jarnell Stokes -- someone Jazz fans still get a little upset over.

So, all in all, the Heat are right "there" for one last hurrah. If their defense has another notch to it they don't have to play fast. And in a slowed down game age and experience trumps almost everything else. Wade and Bosh can still get to the line anytime they want, and this team -- if they stay healthy -- can be trouble for almost every other team in the conference when the playoffs arrive. But that's the thing, can a group of old people stay healthy?  Young guard Tyler Johnson is now going to be out for the season (or at least two months, depending on his rehab). Pat Riley may need to make a move. He's got a contender, but like the Cavs (see Central outlook here), not one that can win the title. So a trade may need to be made.

The Heat have a higher salary than the Bulls, and a lot of their most traceable contracts are for ancient players that no one really wants. I don't see them making a move, unless they really feel the need to do it a few months before $43.1 million dollars worth of contracts expire. See, that's the other thing about the Heat. They are in win-now mode. But with all that cap space they will still be in win now mode next season as well. And there's no need to make a trade now because almost any trade will put more salary on the books for the next coming seasons. (For those keeping score at home, the only guys on contract beyond this year are Bosh, Dragic, Josh McRoberts, Winslow, and non-guaranteed deals.) Luxury tax this year, but it's only $5 million. Pat doesn't have a problem with that.

The Hawks are in a rut. They could turn it around and end up #2 in the East and still be in a rut. And I love this team. And as a result, that's why I have to say it. They have a lot of lovely pieces, but I don't know how much better they are going to be if they keep it all together. And think they know that too, with all the trade rumors going out. The Hawks are listening to offers for Al Horford. Everyone seems to want a piece of Jeff Teague.Dennis Schroder is almost at that "play me or trade me" part of his rookie contract. And they just don't have dependable inside help outside of Al and Paul Millsap. They are barely over the cap ($71.6 is slightly more than $70.0), but 11 of their contracts on the roster are all lower than $6m a pop, with eight of those 11 under $3m. If they want to make a trade or two, they can be very willing and accommodating dance partners.

Horford is particularly interesting because he's a $12m expiring deal. He's making 34% of his threes, which is a nice bonus from his usual paintwork -- 15 ppg, 7 rpg, 3 apg, 1.5 bpg. But if Atlanta is trading him (for fear of losing him), they'll want a starter back. You don't see playoff teams get rid of a starter too often. But sometimes when they do, it leads to bigger and brighter things. (See the Pistons and how they moved Adrian Dantley.) I do think that if Atlanta doesn't make a move this is about how good they are going to be. Kyle Korver is approaching diminishing returns. Kent Bazemore is at his peak. I don't know how many more evolutions Millsap has, but he can't be asked to do much more.

The East is there for the taking if a team is bold enough to improve their team. History tells me that the Hawks will not be that bold. (Ask Dominique Wilkins about how well the team built around him.)

This season hasn't been great for Charlotte. They are under .500 despite being over the cap, and about halfway towards the luxury tax. They aren't there yet, but it's clear that they didn't make the best team possible for the results they are getting. They are in the playoff chase for the last spot in the East, but I don't think that makes everything better. Michael Jordan has to drive a truck full of money to Al Jefferson's house every week, while he elected to have arthroscopic knee surgery midway through a season after averaging 12.5 ppg. Kemba Walker is doing things, and Marvin Williams (in a contract year) is, surprise surprise, having an up season -- if you found his 41.9 FG% as up. The only one who seems to care this year is Nicolas Batum, and his contract is expiring too.

I guess that's the good thing. There's a lot of youth on rookie contracts (Frank Kaminsky, uh, wait, is that it? For reals?). Okay, there are a bunch of younger guys in their peak right now (Michael Kidd-Gilchrist, Spencer Hawes, Jeremy Lamb, Jeremy Lin... oh man). Okay, well, they at least have a lot of guys on expiring deals. $38.7 million off the books is going to be sweet. Until you recognize just what this team has historically done with cap space.

They could, and probably should, make a trade at the deadline. However, the allure of clearing nearly $40 million in salary is too much to overlook. MJ likes to bet on himself to be successful. So I wouldn't bet on them making a trade.

As bad as the Hornets have been, what ever happened to the Wizards? John Wall? Nene? Marcin Gortat? Bradley Beal? Shouldn't this team win 50 a year? Well, injuries seemed to have wrecked this team before they got a chance to start getting better. They are 11th in the East. They could make a run for the playoffs. But I don't know if they are too far behind to make it worth it. There are only 36 more games left this season, are they going to somehow overtake five teams to get that 4/5 match-up that they should have had? I don't think so.

Another complication is that I feel like this team is nearing their peak, if they aren't already there. Sure, their record is not indicative of how good this team is. But this team is at their peak with this core. They aren't specifically over the hill like the Heat, or have a lot of strife like the Hawks. But outside of 25 year old John Wall and 22 year old Bradley Beal I don't see anyone else getting better anymore. Otto Porter should, but I'll believe it when I see it. Kelly Oubre should get better too, and perhaps I'm being too negative about them. But their major players (of which right now Oubre is not one) are all at their best, or a little behind that.

For their efforts, though, the Wizards GM has positioned them to drop a lot of salary this season just like CHA and MIA -- upwards of $36.5 million. They are saving money to make a pitch for Kevin Durant though. So I don't think they mess any of that up by trying to add salary right now. The way to get out of my peak category is to shake things up so that the roster can advance to a higher  state. KD helps them do that. So this season is really an afterthought.

I think they stand pat.

The Magic are UNDER the cap, so they can take on salary. They are one of five teams in the entire NBA who can say that. They are also a team on the rise by itself, with youth and smart cap management on their side. Two thirds of their team are 25 years old or younger. And most of them are on their rookie contracts still. They are really only paying Tobias Harris, Nikola Vucevic, and Channing Frye. Everyone else is on a very simple deal, and easy to move. Of course, I don't think you HAVE to make a move at all if you are the Magic. Not for at least another season or two, depending on which of your younger guys step up, and which ones do not work out.

But as with all the teams out there in the East, upgrades are available if they wanted to go that way. I just don't think of where they are in their core group life cycle to justify doing that right now. I can imagine that the opposite is happening, that teams with more experienced or over the hill players are trying to poach some of their youth. I know that even I am guilty of that at times.