Okay, we get it. Alec Burks isn't playing right now and it's making the natives restless. Utah Jazz head coach Tyrone Corbin has a problem that a lot of other head coaches wouldn't mind having -- having a lot of NBA quality players on his roster. Burks has played 2 minutes all season long, and that was in garbage time in a 19 point victory. He has not seen the floor since then. He's not injured, that we know of. He's not suspended, that we know of. He could quietly be both.

Burks is talented, but so far this season Randy Foye has been shooting very well. In the Zero-Sum game of Foye or Burks, right now going with Foye is not a bad call (unless you care about defense). This is possibly not a Zero-Sum game between Foye or Burks though. People have made suggestions to cut Jamaal Tinsley 's minutes, or DeMarre Carroll 's minutes. I don't know if there is an easy solution . . . but let's suggest a few, and have you vote on it.

UPDATE! David Locke just tweeted / posted this to twitter and Sulia. I don't know what Sulia is. But it's great. Check this out ladies and gentlemen! 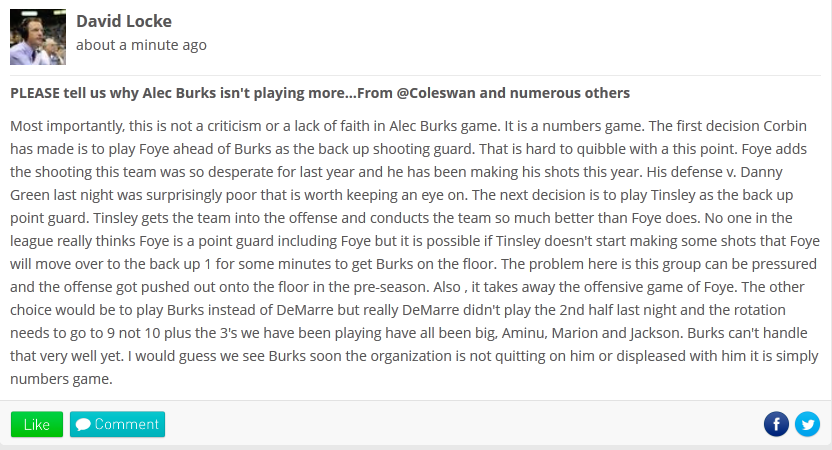