Player of the Week: Week 2

The Utah Jazz finish their second week of the regular season with an even 2-2 record.

Share All sharing options for: Player of the Week: Week 2

It was a so-so week for the Jazz. They beat the Lakers, which is always great. But the Suns win wasn't as satisfying as it could have been, and then you have two disappointing road losses to the Nuggets and Grizzlies. You probably already know this, but the Jazz are 3-0 at home and 0-4 on the road. Obviously teams are going to play better at home (and I sure at this point most other teams have similar records) but we are seeing two completely different teams at home and on the road, and you have to wonder if we are going to see this all season long. Anyway, here's this week's post.

Mo started the week off just fine, playing good in both the Memphis and LA games (16.5 points, 7.5 assists). However he didn't finish it well, as Mo really struggled against the Nuggets (Went just 1/6 from the field) and missed the Suns game due to injury. One thing I noticed as I was looking over some stats was that he only took 6 shots when he was struggling vs Denver. I bring this up because he took [a combined] 32 shots in the other two games. It's great that Mo recognized he wasn't hitting as many shots and stopped shooting.

I thought Gordon actually had a pretty good week. While he is still struggling to get that jumper to fall (something that has carried over from last season), he has been much more aggressive than usual, in a good way. Instead of pulling back and/or deferring, we are seeing Hayward take it to the hoop in a confident manner, and he's been seeing success. Gordon is taking almost 3 more shots per game this year, and I'm glad.

A very average week for Marvin, who is still trying to find the shooting groove he had during the preseason. His +/- was second best on the team, but nothing really shined statistically for him. How good is Marvin Williams? Right now I think he is pretty "average". But there isn't a problem with that. Being average is definitely better then being bad, and we had more than enough bad wings last year. And he's just 5 games into the season on a brand new team, so it really is to early to make any real judgments.

It was a roller coaster week for Al, who led the team in both scoring and rebounding. Jefferson played poorly vs the Lakers (sure seems like he always struggles with them) going a scary 1 for 9, but then had his best game of the year (27 points, 14 boards) against the Suns. He dominated the Suns all game long, and didn't halt or slow down the offense like he's been known to do at times. Al absolutely killed them (the Suns) in the fourth quarter, and I think I've taken that part of his game for granted. He did this multiple late last season. I don't know his clutch stats, but I'm guessing they are pretty good.

Don't let those shooting numbers scare you, Tinsley actually had a pretty nice week. Jamaal had his first start of the season on Saturday, and made the most of it finishing the game with 14 assists (That's a Jazz season high. He also led the team for the week). Jamaal earned high praise from his teammates as I listened to the post game on the radio. Al, Marv, (and others) brought up his leader ship, on and off the court. You can tell they respect Tinsley. He might not be that good of a player at this point, but I definitely think he has a role on this team.

Having big games vs the Lakers is a good way to get on a Jazz fan's good side. Foye did just that last week, draining 5 threes vs LA, including 3 in the fourth. I can't remember a Jazz player lighting it up like Foye since maybe Korver. Problem is, his 39% shooting from deep happens to be better then his 38% shooting from the field. Will either of those get about 40% this season?

Despite making it back into the rotation (over DMC) Burks made very little impact on the court last week. He made just 2 shots in four games, and only went to the line 3 times. I also think he went to his jumper a bit too much, especially considering it wasn't falling. Maybe it's a slump, maybe it's his intensity. I don't know. I do know though that if Burks doesn't step it up soon, he'll likely lose that spot in the rotation just as quick as he earned it.

Very nice week for Derrick, he's looking better as every game goes by. He didn't get a ton of burn last week, but he surely didn't disappoint when he was on the floor. His 2.8 blocks were best on the team, and works out to be 4.7 per 36 minutes. We are literally seeing Favors dominate games defensively right now. And don't forgot his offense, which also has looked much better recently. Favors was great at attacking the hoop as usual, but what about that fade-away jumper vs Denver, or the behind the back move vs the Suns? We know how good he can be defensively, but how good will he be on the other side of the ball?

Kanter is starting to get used to this scoring thing. Enes led the team in field goal percentage last week, shooting a ridiculous 73.4%. Like Favors, we are seeing improvement almost every game. He's expanded his post game to more than just the up and under, and it's proved beneficial and helped with his predictability. Kanter's rebounding however, has seemed to take a tumble. Last year he was averaging 11.5 boards for ever 36 minutes, this year? Just 8.5.

Not the easiest decision, but here's this week's winner.

Player of the Week: Week 2 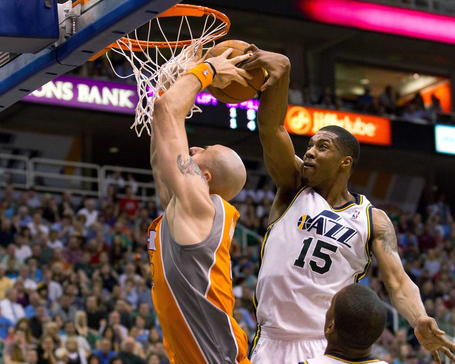