Player of the Week: Week 3

For the second straight week the Jazz finish with a 2-2 record.

Share All sharing options for: Player of the Week: Week 3

It was a far from satisfactory week for the Jazz. They went 2-2 on a road trip, which isn't usually bad. However the Jazz lost to both of the 'good' (Philly, Boston) teams and struggled to put away the two 'bad teams' (Toronto, Washington). It's nice for them finally pick up a couple W's on the road, but it's still clear they struggle away from home, something they have to improve on if they want to make the playoffs in this stacked Western Conference.

Last week I talked about how it was nice that Mo shot less when he shot poorly. That wasn't the case this week as Mo attempted the second most attempts on the team despite shooting an ugly 36.6%. It's not just that his shots aren't falling either, Mo's shot selection has become more questionable, especially in the clutch. It was nice however to see Mo take the blame for the Celtics' loss. That's something that leaders do. We also have to realize he's a scorer first, passer second. 7.5 dimes isn't terrible for a pass second player.

Not a terrible week for G, but I still don't think he has found his role on his team. Aggressive Hayward or Passive Hayward? Should he be taking control of games or should he let others? I think I speak for most of us when I say I like the aggressive Hayward more. Problem is, he has been starting with Millsap, Al, Mo, and Marv. It's hard to get a lot of touches when in that lineup. Corbin switched the lineup on Saturday, putting Hayward on the bench. He responded with a nice 15 points on 10 shots. Is Gordon better suited as a 6th man? I think he might, at least on this team.

Another average looking week for Marvin. He played well vs the Raptors scoring 17 points, but only scored 16 points combined over the next three games. This inconsistency thing that Hawks fans warned us about is starting to come true. He looked great in the preseason, but has looked like all sorts of things since the real games started. I'm fine if he's just an average player, I'd just like to see more good then bad.

Minus the Washington game, Millsap had a very nice week. He led the Jazz in scoring, and was half a rebound away from averaging 20 and 10. His best game was vs the Raps, where he dropped 34 points and nailed 3 clutch threes. Sap shot 5/10 from deep last week and is a super impressive 10/18 on the year. He's on pace to take 134 threes this season, that's crazy. Big ups to Sap on adding this skill to this game, which looks like it will be regular as the season goes on.

Al is still far from playing at his top level, but he's slowly getting closer. He led the team in rebounding with over 13 a game, love seeing that. Al was just behind Paul in scoring, and while he is still shooting under 50%, he's improved in that stat for two straight weeks. And yes, he's still coming up big late in games. Game tying three with just seconds left, why not?

Really liked what I saw from Favs this past week. He was awesome on defense(1st on the team in both blocks and steals), as usual. His defense is by far the best and more consistent part of his game. Offensively he wasn't great, but he was far from bad. The 40% shooting is obviously not good, but I honestly think that shots just weren't falling for the big man. He is getting to the rim with ease, and when he gets to the rim he is either finishing strong (he did miss a few shots he usually makes) or getting fouled. Favors set a career high in free throws vs the Celtics, where he shot 14 and made 10.

Enes had a few nice moments last week, but for the most part was really quiet. His rebounding still isn't Enes Kanter rebounding, and his shooting dropped off a cliff (shot 73% previous week). We are slowly seeing him add that baseline jumper to his game, which is pretty exciting. For the most part he still looks like a young player to me. But he still is young, so that makes sense. Duh. Kanter is a much better player when he's confident, so hopefully this slump ends quickly.

Up and down week for Foye, who played well in the first two games and bad in the next two. Foye was pretty hot from behind the arc throughout the week, shooting 7/13 (53.8%) but then shot poorly from the field, again. He's shooting just 37.8% from the field this season, which is pretty bad. Then again it's hard to complain when Josh Howard and CJ Miles, two players you could say Foye replaced, are shooting just 30% and 23.4% (respectively). Randy is also making 42.6% of this threes this season, which happens to be the best on the Jazz.

DMC only played in Utah's final two games, but he surely made an impact in both. He led the team in +/-, which was no accident as he was fantastic vs the Sixers, going for 17 points on 6/6 shooting (4/4 on FTs). You will always get the hustle and effort with Carroll, but not always offense and defense. We saw everything from Carroll last week. Can he keep it up? I don't know. He'll surely need to if he wants to keep his place in the rotation.

It's getting obvious that Tinsley doesn't have much left in the tank. I don't blame him, he's put a lot of miles on those legs. The only reason he is still seeing time on the court is due to his play making and pass first mentality. Which is really good. I like Tinsley as PG, I really do. However the defense is minimal, the offense is pretty much non-existent right now. Is it Earl Watson time?

Very hard decision for me this week, did I make the right one?

Player of the Week: Week 3 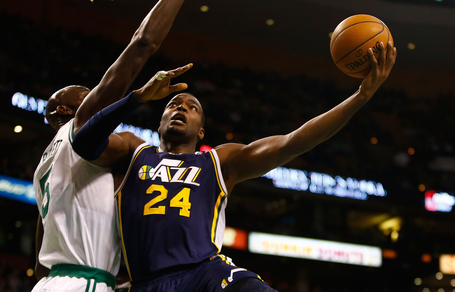