Utah Jazz Strategy: The Taboo of the Pull up in Transition Three Pointer

Share All sharing options for: Utah Jazz Strategy: The Taboo of the Pull up in Transition Three Pointer

Did you know that last season only 11.77% of all the shots the Utah Jazz attempted were three pointers? I did not. I also did not know that only 9.44% of our threes attempted were threes in transition. I did know that we kind of had to shun the long ball last season because of, well, personnel. (Insert your own montage of Devin Harris airballs and C.J. Miles shots with 2 seconds left on the clock that hit rim, and rim alone here) I did know that our transition scoring has kinda gone down year by year (from being among the best, if not the best, in the NBA to being one of the worst).

Thanks to David Locke's Tip Offs I got interested in looking all of this up in Synergy. A big part of what we're going to do this season is going to be based upon the added dimension we now have due to the Front Office's off-season targeting of three point makers. We added Mo Williams, Marvin Williams, and Randy Foye. The Jazz also drafted Kevin Murphy, and expect improvement from the outside from Gordon Hayward, Alec Burks, and DeMarre Carroll -- but those last four guys aren't the big reason why the Jazz shot 42.9% from deep this preseason. (Well you could argue that Burks' going 7/11 from deep in the preseason contributed -- but we know better than to extrapolate preseason success into the regular season on a 1:1 basis)

Part of getting three point makers *kinda* also means letting them take three pointers, though. And after one game it seems like the threes can fly, which is kind of what happened during the preseason. It's not like the Jazz are running the Houston Rockets offense from the mid 90s where they'd dump it into Hakeem Olajuwon and surround him with three point shooters. We could conceivably do something like that, but Al Jefferson isn't as efficient at scoring, drawing doubles, or passing to make that work. Right now the Jazz are sharing the ball, running, picking up the pace -- and scoring in transition.

More and more scoring in transition breaks down into letting the guy with the best shot take the shot. And in today's NBA, this includes taking transition three pointers. Three of the guys we brought in did this quite a lot last season for their respective clubs (The Los Angeles Clippers and Atlanta Hawks). This is in juxtaposition to the fact that the Jazz shun not only the three, but really aren't known for giving guys the green light in transition. That said -- an open three from a good shooter IS a better shot than a contested layup. How many Josh Howard plays did we watch last season where he botched a transition scoring attempt by consistently doing dumb sh*t? What we learn from Josh is that a shot in the paint isn't always the best shot. Not anymore, not with three dead eye shooters who are in proverbial hot streaks right now.

Let's break down the numbers (All numbers from Synergy): 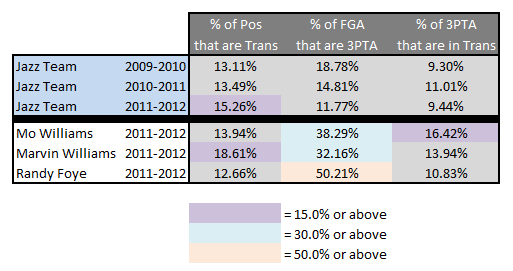 The Jazz attempted more transition plays the last few seasons, but as we saw in a post earlier this year, to diminishing returns. The Jazz also shot fewer and fewer threes. And overall, about 10% of all the threes were in transition. 10% is not a huge slice of the pie. In comparison, Mo Williams, Marvin Williams, and Randy Foye took a considerably larger percentage of their FGA as 3PTA. Furthermore, they seemed to take more in transition. Mo Williams took 16.42% of his threes in transition, for example. And, well, Randy Foye took more than half of his total FGA as 3PTA last year. These are not the type of distributions we've come to expect from "Jazz basketball", but it's a new NBA. And we finally have the athletic players with three point range to play in this league.

Well, these three bombers do take more threes overall, and in transition, than our team is historically used to. Is this a good thing or a bad thing?

Hmmmm. Not only do they take more threes than we're used to, and that they take more threes in transition than we're used to -- but they actually ALL SHOOT BETTER IN TRANSITION? I guess this is due to being super open and taking a low pressure shot in rhythm. Of course this doesn't tell the whole story. Some of the threes recorded by Synergy that could be transition threes are recorded in the "Spot up" category -- but believe you me -- all three of these guys do fine there. Even some of our non-three point shooters do fine on Spot up threes . . . apparently the worst player in the NBA, Alec Burks, shot 12/24 on spot up threes last year. So if he can do it, you know that the MMR group (Mo Marvin Randy) can take care of business. (Mo+Marvin+Randy went 205/501 from three, off of Spot up plays last year -- 41.1 3pt%)

So what did we learn? We learned that these three guys targeted by the front office really give us depth, quality, and legit three point threats. And they not only take more threes than we're used to, but they are a) good at it, and b) capable of fixing our transition offense by taking threes in transition too.

It's taboo. I get it. And it's "bad basketball" to play Monta Ellis ball. I don't think our team will ever devolve into that though. Especially not when all three of them only take smart threes, and improve on something they were good at in the first place when shooting open shots.

And before we go crazy, last season those three guys took a combined 1.58 threes in transition per game. It's not a game changer, but it can be a run sustain-er for our team. And we saw that on Wednesday night. And if coach Tyrone Corbin plays his cards right . . . we should see it more and more this season as well.