Share All sharing options for: Utah Jazz Xs and Os - Dissecting what's been working within a results based frame of reference

If you've been a Utah Jazz fan for a long time (or even just for a few years but pour over statistics) then you may be aware of the march of time. Things are bound to change, while some things seem to always stay the same. This is true for other franchises as it is for ours, the Los Angeles Lakers always seem to want to get a high scoring center, the Boston Celtics always try to get good interior defenders as a result. The Chicago Bulls love high usage rate guards. Year after year, generation after generation, rebuilt after reload -- some teams try to redo what's worked before. We've been trying to do the same with a forward oriented offense passed down through the Dick Motta coaching family tree (I started a post on it, it was conceptually too big to even discuss).

Well, there are changes this season. For one, with who we have on the team, we're forced to change. Carlos Boozer wasn't Karl Malone -- even on his best nights Boozer would hit 28 points. That was an average for Karl. Al Jefferson, bless him, can't even score 20 with regularity. Al averaged 20 or more only twice in his 9 seasons in the NBA, and right now he's averaging less than Andrei Kirilenko did back in 2004 season. But it's not about players, it's about systems. And the team system is changing.

Before we go into (in another post) how this season looks like compared to previous years -- let's take a look at what's happening this season with the Jazz.

Number of different plays per game:

The Jazz and their opponents roughly have 85 plays a game. Of these 85 games, both teams take 18-21 spot up plays a game. This season the Jazz are trying to play in transition and off of post ups, and are doing so fewer times a game than we are getting a spot up shot. On defense, the Jazz are mostly playing against transition and the ball handler in the pick and roll. Beyond (on offense) spot ups, transition, and post ups, and (on defense) spot ups, transition, and pick and roll guard play -- we see a whole lot of other plays, but infrequently. 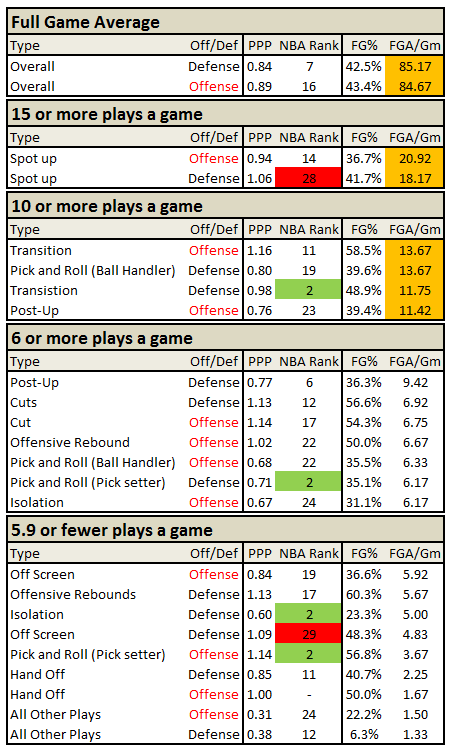 We see a number of other information in this table, but we'll get into it in the following sections. Over all, our offense is more diversified than our opponents so far this season.

If we divided things by NBA ranks, we see an affinity for certain plays right now. 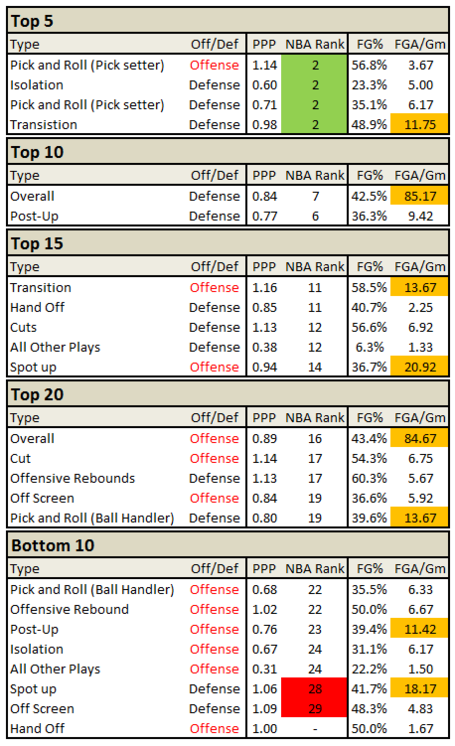 The Jazz are killing it with the roll man on offense, while shutting him down on defense. Also, surprise surprise, we're taking care of business on defense against isolations. Out of all the Top 10 things in NBA, only one of them is on offense. Does that mean we're a defensive team now? I wouldn't say that. A huge factor is how frequently these plays are happening. For example, we're #2 in PPP for the guy setting the screen on the pick and roll. However, that guy setting the screen is only getting the ball back less than 4 times a game, and a game is 48 minutes long. Where as, we're 28th on defense against spot ups, and we see that 18 times a game, the most frequent thing we see on defense.

If you look beyond how frequently we run a play (or have that play type run against us), or how well we fare against the other 29 teams in the league . . . you have the baseline metric of points per possession (PPP). If we rank our offensive plays by highest to lowest, and defensive ones from lowest to highest -- we see what we're good at. 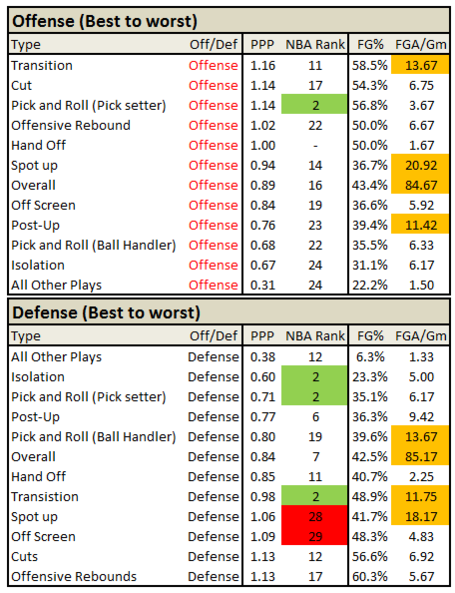 Defense is another animal. The Jazz are really good against isolations, post ups, 'random plays', and the man on the pick and roll. Part of that is because we're not so great against the man with the ball on the pick and roll. We're also really bad against spot ups and off of screens. (Btw, Alec Burks was pretty good at these two things last year . . . but whatever . . . ) The Jazz have been getting killed off Offensive rebounds (ask Robin Lopez) this year.

But, just like NBA Rank, or frequency are parts of the equation -- so too are just the raw PPP values. We need to put it all together.

If you add it all up -- and I'm the only guy who synthesizes this data in this way on the entire internet (so you're lucky I'm not a Celtics fan or something and would write all these articles about them and not the Jazz) -- you get the estimated number of points per play type. That's really the missing piece of info from all the Synergy data. 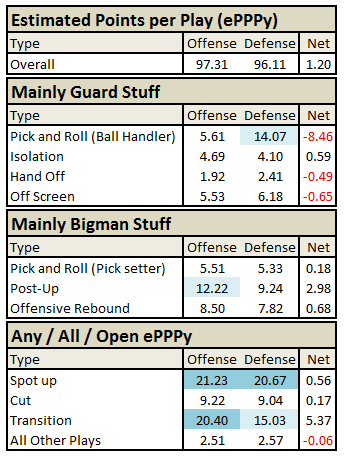 This really is "the more things change, the more they stay the same". The Jazz haven't been great scoring inside this year, but because we do try it so consistently, we are killing other teams at these things.

The Jazz have also rededicated themselves towards the transition game, and we're good there. We're +5.37 points per game better. We've also gotten good spot up shooters, and while the other team (looking under the hood) shoots better than we do, we don't shoot poorly, and we shoot more -- so we are more dangerous over all from there. We could cut better, but we don't.

Where the wheels fall off, as usual, is on guard defense. We have that "no, no, no, no, yess" style one on one shot from Mo Williams this year (isolations), but that shouldn't be a big part of our offense. What's a big part of our defense is pick and rolls on the ball handler. Who do you think this falls upon? It falls upon the bigs to help on on the ball handler when the primary defender is picked. It's also the pick and roll ball handler who elicits the defense to move in, and leave guys open for spot up shots.

This has been the problem for more than a decade of Jazz ball now. We need to stop penetration. It's hard to do, but if we could do it, then we'll be a much better team.