Utah Jazz History Lesson -- The last 30 years of winning overall, at home, and on the road

Share All sharing options for: Utah Jazz History Lesson -- The last 30 years of winning overall, at home, and on the road

Okay, I get it. Last night we lost on the road to the Sacramento Kings -- a team that doesn't strike fear into contending teams' hearts. (Game recap here) It's a loss, we looked bad, we played bad, and in a perfect world -- we would have won. That said, it's really hard to win the second night of a b2b without your most important starter (Mo Williams). It's also hard to win the second night of a b2b when you are on the road. Third, it's hard to beat the same team twice, especially because the losing team makes adjustments, while the winning team, because they won, feel like they can do the same thing over again.

The situation during the game, you know -- having our top scorer from the last two season go out with an injury, and then the other team going on a run -- was far from ideal.

HOWEVER, beyond last night's game, or beyond even the point that back to backs on the road are tough -- we need to go deeper into history. Utah Jazz history, specifically, has been filled with absolutely dominating home teams. That said, I'm not a Utah Jazz fan who came into the fold during the Deron Williams era. Or the NBA Finals era. I came into Jazz fandom during the nascent period of Stockton and Malone. As a result, my perspective on things may be different (not better, not worse, just different) than yours.

I remember when Stockton and Malone were pesky young players, but not stars. I remember our hilariously cobbled together rosters, and team that took care of business at home -- however, I still vividly remember every road win like it was Christmas coming early. It's historical revisionism to omit this period of Stockton and Malone's ascent. We used to be a bad road team even with them. Back in the Frank Layden days. Back in the Jerry Sloan days.

We got better, but only after our entire team did as a whole. Road success, one could assume, is more closely related to overall team ability than home winning percentage. And we were a bad road team until we became serious contenders. Right now we're a good home team -- but we've historically always been a good home team. Most teams are. We're just not a contender right now. I'd argue that we're rebuilding -- but the front office fears people will stop buying tickets if they even hint at playing Alec Burks of being in a rebuilding phase.

Anyway, I did all the work. And here it is. 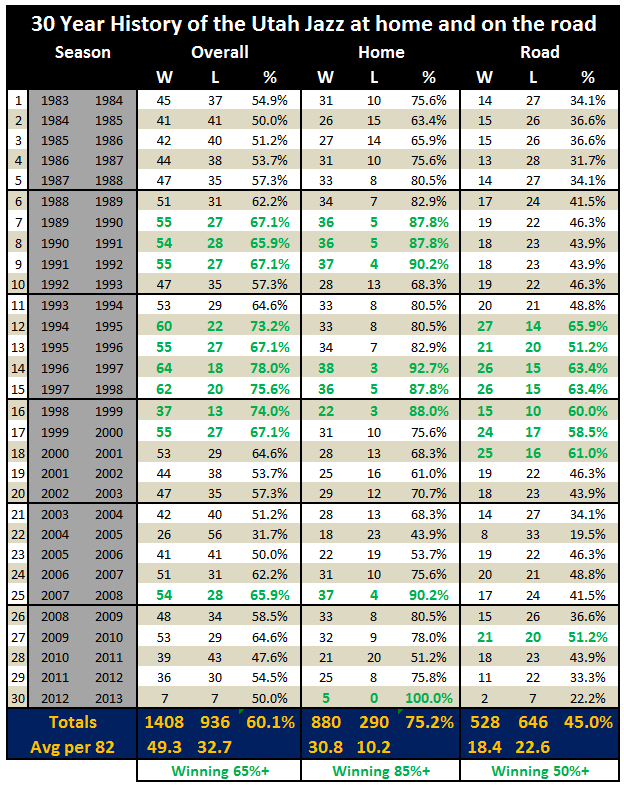 In the last 30 years the Jazz have won 65% or more of their entire regular season games 10 times. So we're a contender 1/3rd of the time during these last three decades. The team, on the other hand, has routinely won 3 of 4 home games every season. The number here is a 75.2% winning percentage at home. Stepping it up, winning 85%, has only happened 8 times. From this we see that in the times when we've been contenders it's not specifically because we do better than normal at home -- some of those wins as a contender come on the road. And this appears to be the case, as the team has won 50+% of their road games only 8 times in 30 years. And we've only really done it when we were a contending team.

Just because we're a bad road team historically doesn't mean we should be playing this poorly on the road. The average if 45.0 winning %, and right now we're at 22.2%. I don't believe the team is only going to win 2 road games this year. And I don't believe that the team is only going to win 22.2% of their road games. Where is my strength in this belief coming from? It's coming from 30 years worth of data. We're a more talented, better balanced team, than last season. We're going to get better -- if for not other reason than the fact that we have better parts this year. And we're going to get better on the road too.

The ultimate point is that we're traditionally not a strong road team. And there are other guys going out there to write about how MOST teams don't win more than 50% of their road games either. Traditionally we're better than 22% though, and I think we will be at the end of the season as well.

Being good at home doesn't mean we should also automatically be good on the road. That's just not how we've been as a franchise. The stronger relationship exists between winning on the road with being a great team. And we're just not a great team right now. So it's hard to win games when a non-great team plays poorly. Which is precisely what happened last night.

So it's not the end of the world. It's exactly what some of us expected though -- 12 of the first 18 on the road was supposed to be rough. And it's rough. And we're still a .500 team despite all of that. If this team is no better than the 2003-04 team or the 2005-06 team I'm not going to be upset this year. Because big changes happened after both of those seasons. More than that, though, I think THIS team is like the 1986-87 team. We're destined for big things, but we're not contenders just yet.