Jazz guard Randy Foye, and Specialization vs. One Dimensionalism

These are two different things

Share All sharing options for: Jazz guard Randy Foye, and Specialization vs. One Dimensionalism

These new three players, in addition to the internal improvement from returning players, seem to have fixed the three point problem on offense for the Jazz. Or at least for one season at least as three of our top five three point threats (Mo, Randy, and Paul Millsap) are free agents at the end of this season, and one more has an early termination option on his contract (Marvin). That said, the Jazz are taking a lot of threes right now and our top five seem to be able to rival the top five deep threats on any single Jazz team in Jazz History. 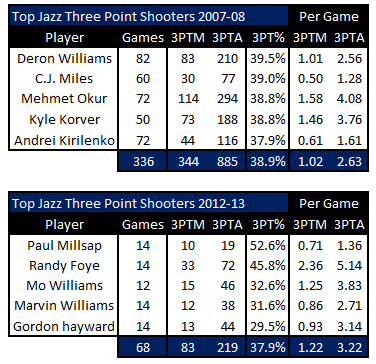 The 2007-08 Jazz team was more equally spread out, but it's hard to argue with how dominant one of our shooters as been. And that player is Randy Foye. He's shooting over 5 three pointers a game and shooting 45.8% from deep. When Kyle Korver broke the single season record and shot 53.6% he was taking 2.1 threes a game. Memo's personal season best was 44.6%, where he was taking 2.8 threes a game. C.J. and Andrei are both unreliable three point shooters, and when D-Will was at his best he was still only taking 2.5 threes a game.

What Randy is doing is beyond that of what we've seen in Jazz history. We need to look at him as one of the best three point shooters in the league right now. So here's the list of the Top 25 players (who qualify) in the NBA right now in terms of 3pt%. Yes, there are four Miami Heat guys and four New York Knicks guys. Other teams are really good at threes too. 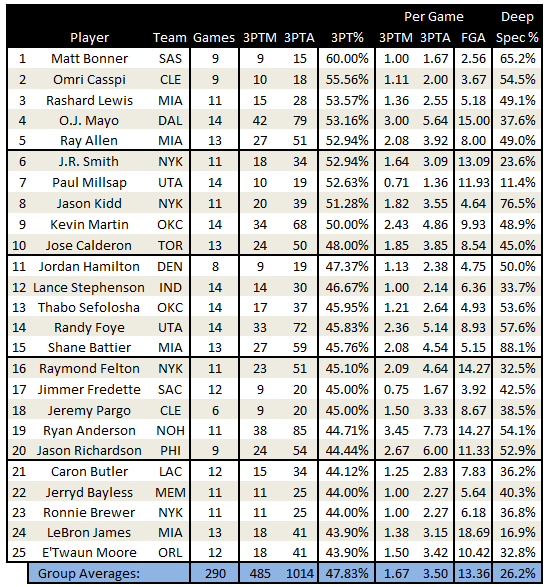 If you re-rank these same 25 players by the percentage of their total FGA that are 3PTA you get even more interesting results. Here again Randy Foye places #4. Shane Battier is #1, with 88.1% of his shots being threes, then Jason Kidd (76.5%), Matt Bonner (65.2%), Foye (57.6%), and then Omri Casspi (54.5%). Ryan Anderson finishes #6 here, and this is important to note because he takes the most threes per game out of this 25 player list, and a majority of his shots are threes. Some other guys are on this list, but take a lot of shots -- just not a lot of threes (like Paul Millsap, LeBron James, and Caron Butler for starters).

But that's not really it. If you look at all these Top 25 guys in the NBA in 3pt% and remove:

If at all you care about ordinal ranks, out of these five guys, Randy is:

That doesn't make him great, but among these super elite three point threats -- he is right *there* among them on everything from raw three point making, on court production, and success percentage, all the way down to stuff only crazy people like I only care about. Seriously, he's more of a deep specialist by 3PTA/FGA% than everyone on that list not named Shane Battier -- who plays with LeBron James, Dwyane Wade, Ray Allen, and Chris Bosh.

But that's just it, though. He's a three point specialist. Ray Allen is a multiple time All-Star and former first option who can drive, dish, and get to the line. Kevin Martin is a former first option who can get to the line. Shane Battier has a legit reputation as a defensive stopper. Ryan Anderson is an up and coming stretch four who can rebound. The only thing Foye does is shoot threes.

Foye doesn't pass -- his Assists per 36 minutes calculation is 2.4 apg, and his AST% is only 11.0. Those are both dangerously close to the dude he's playing over, and one of the reasons why he's playing over Alec Burks is that "Burks has one of the lowest assist rates out of shooting guards", Burks is at 2.3 and 9.4% respectively.

Foye doesn't draw defenses to him and create for others, rather out of all of the other guys not named Shane Battier, he's the most likely recipient of low defensive pressure. Kevin Martin comes off the bench and isn't usually on the court at the same time as Kevin Durant or Russell Westbrook. Ray Allen is rarely left open (unless the team is dumb). Ryan Anderson is one of the only guys on that team who can score.

Foye doesn't play a lick of defense. Well, not entirely true. In the Toronto Raptors game he made 2 amazing defensive plays, neither of which show up on the box score -- but 2 plays in 14 games isn't good enough. Especially when every opposing guard has a near career night when you line up next to them for the tip off.

Randy Foye does one thing, and he does it better than almost anyone else in the NBA. He's a three point specialist; and that's precisely something we needed on our team after last season's near all-time futility mark from deep. But I just don't think he does enough either on offense or on defense to deserve being a starter. Again, he's not passing, he has a PER of 12.3, and is shooting 16/53 from 2PT this year, which is 30.2 2PT%. His NET PER (his vs his opponents) is awful at both PG and SG; his team gets a net -16.7 points per 100 possessions with him on the floor; and his defensive numbers of Synergy just make me want to find a new hobby. The other guys who are on that elite list all bring something else to the table besides being a three point maestro.

I don't know how long Foye can keep this hot streak going, this season he's shooting a career best from deep. The previous four seasons he shot .360 , .346 , .327 , and .386. He's significantly higher than that this year. If he regresses towards the mean (career .371) that means he's going to go through a prolonged stretch of performing below the lofty expectations fans may be setting for him based upon 17% of the season so far. So that brings us to the nagging question . . . in the off chance that he returns back to earth, and his shooting stroke abandons him, what else does he bring to the table to deserve playing 24.9 out of a total 48.0 mpg?

Does Tyrone Corbin keep playing him through a potential slump? Will Tyrone Corbin give someone else a shot? Will Randy be able to be effective off the bench as a shooting specialist while minimizing his negative affect upon the team in terms of +/-? Or will Randy get better overall and be able to contribute positively if his shot isn't falling?

All evidence points to his playing time being set in stone, regardless of quality of play. So for our sake, I hope his spectacular shooting continues all season long. It's the one dimension that he has that elevates him in terms of our heightened needs from his position right now . . . but it's a very fragile one-dimension indeed. (Physics tells us that the shots most likely to be off-target are the ones from farther away . . . )