Player of the Week: Week 4

Utah went 2-1 last week, winning at home vs the Rockets and splitting a home/away with the Kings.

Share All sharing options for: Player of the Week: Week 4

2-1 isn't a bad record, but I still don't feel terribly good about the Jazz's week. The win against the Rockets was solid (minus the near comeback) but their play vs the Kings left me far from satisfied. The team is in an interesting state right now, it feels as if they are either on the surge of a breakdown or nice win streak. Corbin definitely has his hands full.

Tinsley actually had himself a pretty nice week. 6 points on 40% shooting is nothing special, but it's above average for him. He led the team in assists (only started once) and had a very impressive 4.3/1.0 AST/TO ratio. While Jamaal gets a lot of flak for his D (mostly deserved), he made a HUGE play on defense vs the Kings where he flat up stole the ball from Aaron Brooks in a isolation attempt, leading to Gordon's game winner. I feel like Jazz fans are split on Jamaal. Some see an aging PG who can't score or defend, others see a veteran who can make plays and manage games. I think he is some both. I also think the Jazz are worse than 7-7 if they don't have Tinsley on the team this year.

Randy had himself a decent week as well. The hot shooting from behind the arc continued throughout all three games where he shot 55% (10/18), that's really good guys. His 44% from the field is about where you would expect for him, but he's more than making up for it with his three point shooting. How? He scored 39 points on 27 shots, that's 1.44 points per shot. His problem is contributing in other areas. He's not awesome on defense, and he's not an effective scorer if he's not shooting. How big of a problem is this? I don't know, and it probably won't matter if he remains hot from deep. Amar did a nice post on Foye and his shooting, check it here.

I liked what I saw from Marvin last week. He played well in all 3 games (which included a 20 points on 12 shots performance vs the Kings) and shot pretty good from deep (6/13, 46%). This is the Marvin Williams the Jazz need and the one I want to see. We don't need him to be an all star, we don't need him to take over games. We just need that 10-15 points with decent defense. Whether we can get that from him all season long, is still the obvious question.

Millsap is in a funk, and it clearly showed last week. All of his numbers are down, really, all of them. Something is up with him, and I don't know what. Is it because he is in that contract year, is he feeling pressure? Is he worried about being traded, or losing his starting position? Could he be hurt? That wouldn't surprise me, as Sap usually keeps quiet about non serious injuries. But maybe, he's just simply in a funk. We've seen some pretty good games from him this year, he's actually looked awesome in a few. So what's up? Why can't he consistently preform? Hopefully some of these questions are answered this week, the Jazz sure are better when Sap is at his best.

Statistically, Big Al had a good week. He led the team in scoring and rebounding and tied for first in blocks. Not to mention just 1 turnover all week. However, like Paul, he still hasn't found his groove (I do think he is closer than Sap). Most of his game is actually looking good, it's just his shooting. 46% is the best (by week) he's shot all year, and he's a 50% (well, 49.9%..) career shooter. Is this because of the new style of Jazz offense, or are shots just not falling? Jefferson can win a lot of games for this team, but he's got to shoot well to do it. Jefferson is shooting 48.2% in wins this season and 41.6% in losses, the key to success is not hard to spot.

Hayward continued to come off the bench last week, and minus one game he continued to impress. He had a nice night vs the Rockets and was absolutely fantastic in the first Kings game where he dropped 23 points and a game winning jumper. However, he struggled in the next game making just 1 of 8 shots. I think the bench role is the role for Hayward. Probably not for his entire career, but for this Jazz team I think so. If he starts, he's getting shots behind Al, Paul, Mo, and maybe even Marvin/Foye. Starting also takes away much of his ability to faciliate since he's obviously getting less touches. Put him with the bench unit and he gets more touches/shots and can play to his ability. Who knows, maybe he can work up some 6th Man of the Year talk..

DeMarre's time may have gone down a little last week (23 MPG last week) but he's still been playing pretty good. While he only took 12 shots, he still finished with the best FG% on the team. Carroll was also second in both steals and blocks. I like his energy a lot right now, it's not out of control. He's making good plays and is providing a small but nice spark off the bench.

Favors had an up and down week. He was alright vs Houston, then had one really good game (16 points, 14 boards, 2 blocks) and one really bad game (2 points (0-6), 4 boards, 0 blocks) vs the Kings. I think he's had a pretty good year so the dud game vs the Kings doesn't really concern me. I do wish he would have played better vs Cousins, who will be compared to for probably the rest of his career. My biggest concern for Favors right now is actually his PT. His minutes are up this year (24 this vs 21 last) but I don't think that it is enough. We have seen him start this year, and it actually didn't fix the slow start problem. However that is with Al and Paul starting as well. Is the BIG lineup best when starting? Probably not. I want to see how Favors does when replacing Al or Millsap in the starting lineup, not joining them. Oh yeah, Derrick had another nice week at the FT line, going 8-9 (88.8%).

Enes looked better than he did in his previous week, but was still fairly quiet. It's great to see his rebounding go back up (12.6 per 36) after a few down weeks. I also should mention he had a career high in assists (just 3, but still..) vs the Rockets. Passing is something he's slowly gotten better at (still far from perfect), and he should continue to do so. Part of me thinks Kanter will actually be a pretty nice passing big man once he figures his post game out. Part of me also thinks Kanter should be dominating other teams benches like he did in the preseason. *insert Kanter is young be patient sentence*

It's always hardest to pick a player of the week when the Jazz under preform. That was the case for this post, but I was finally able to come up with my decision. Make sure to vote and let me know if you agree or disagree.

Player of the Week: Week 4 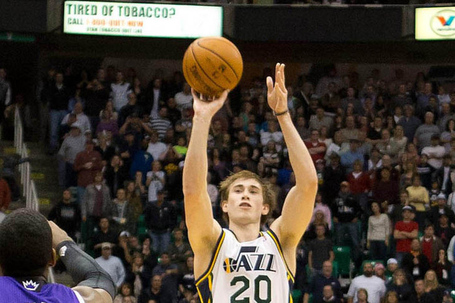