Player of the Week: Week 1

The Utah Jazz go 1-2 in their first week of the regular season.

Share All sharing options for: Player of the Week: Week 1

The Jazz started the season off right with a win vs the Mavs, but they finished the week poorly falling short to the Hornets and Spurs. While the Jazz showed off what their quicker offensive pace and three point shooting is going to do for them this season, we also saw that it might take more than a game or two to adjust and get used to each other.

Not the best start for Big Al, but his play did start to improve as the week went on. 10 rebounds a game is a great number for Al, who hasn't averaged double digit boards since the 08-09 season (he averaged 9.6 last season). As a first option on an NBA team, his shooting numbers still need to be better, and I think they will be. He had a perfect fourth quarter vs the Spurs, making all 5 of his shots and keeping the Jazz in the game. We saw Al do this last year vs the Magic and Suns and we secured a playoff spot because of it.The last time Jefferson shot better than 50% was the 07-08 season, can he reach that mark this year?

Millsap put together a nice first week, leading the team in rebounds and steals, he even finished second in both scoring and shooting percentage. One thing I noticed about Sap was his energy level. He kept multiple plays alive, grabbed all sorts of rebounds, and looked a whole lot like he did earlier in his career. Paul's energy level hasn't been the same the past season or two, and I don't blame him. He's had a much bigger workload. You have to wonder if that workload goes up or down this season, which will probably depend on the production we get out of our young bigs, Enes and Favs.

It was an off and on week for Marvin, who officially debuted as a Jazz man. He was a major factor in Utah's win vs the Mavs, scoring 21 points and hitting two three's. His play in the other two games was exact opposite however, as he scored just a combined total of 13 points, and connected on just 1 of 7 three pointers. I don't remember who, but someone mentioned Hawks fans complaining about Marvin's inconsistency in Atlanta. Did he bring that to Utah?

While he didn't have any eye popping numbers, I thought that G looked good in his first week. One thing I think we all want to see this year from Hayward is the return of this three point shooting (33% this last week). He shot a scorching 47% as a rookie, but that dropped all the way down to 34% in his second year. He likely finish somewhere in between those two numbers this year, but where?

Very impressive week for Mo, he absolutely killed it. He led the team in 3 categories (scoring, assists, steals) and single handily brought the Jazz back into the Spurs game with some very impressive shooting. I really liked Devin Harris, and have zero hard feelings against the dude. However, it's clear to me that Mo is an upgrade over Harris and could be a pretty big one. Not only is he scoring from all over the place, he's doing it efficiently. Just as importantly Mo has filled a major void on this team with his leadership, something he's embraced. I'm excited to have Mo back, hopefully he can keep this up.

Another rough week for Tinsley, who has really looked bad since the preseason. He hasn't shown yet that he can score or defend, and his play-making has been pretty average. It's hard seeing him remain the primary backup if he keeps this play up.

Randy definitely started his career on the Jazz on the right note. In his first three games, he proved to be a great scorer and shooter off the bench and was the only reason the Jazz were in the New Orleans game. He's shot 42.9% from deep, which will be the most important thing he brings to this team. There were a few times that I felt he took a shot he shouldn't have (to his credit, he made a few), and hopefully that is him still adjusting to this team. I know it's very early in the season, but Foye could be another upgrade on this team, this time at the wing position.

Along with Tinsley, Carroll was another player to get a lot of flack from Jazz fans last week. But their complaints, don't go without good reason, as DMC really has failed to be a major impact yet. DeMarre needs to find a groove, whether it be on offense or defense, if he wants to stay in the rotation.

After having a slightly disappointing preseason, I thought Favors had a solid week. His rebounding and defense were impressive, and he also lead the team in FG%. However, he only took 12 total shots in the process. While I don't think this is completely on Favors, I do think he sometimes struggles to get a shot off when he shouldn't. We saw an example of this last night when he matched up vs Bonner. Despite being the bigger, stronger, and more athletic player, Favors struggled to gain position and get a shot off. This does concern me a little, but it is sure is nice that he has the opportunity to learn from Jefferson, who happens to be one of the best at getting a shot off.

Kanter took a big step backwards last week after having that very impressive preseason. Now he wasn't terrible, we just saw a lot more of Rookie Kanter than we saw of New Improved Kanter. The zero assists to nearly 3 turnovers (in just 15 minutes) is what concerns me most. Enes is getting much better in the post, but he still needs to learn when and how to pass out of it. Thankfully he has a while to learn stuff like that, and with his work ethic, I expect him to.

I thought it was a slightly disappointing week for the Jazz, but they still had their bright spots and have me excited for the rest of the season. So who was this season's first Player of the Week?

Player of the Week: Week 1 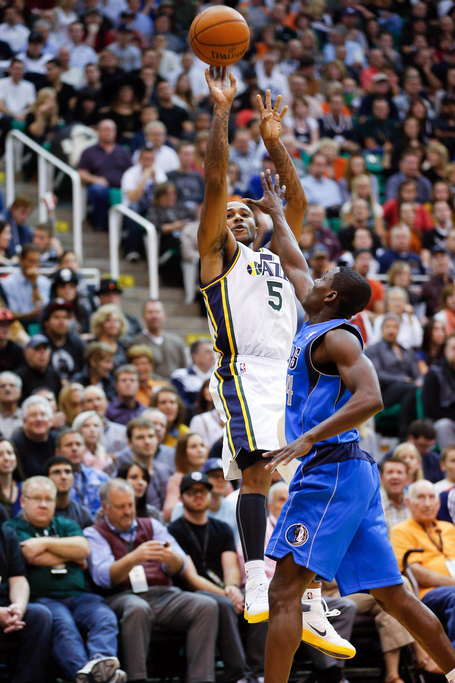