Player of the Week: Week 7

The Utah Jazz finish their 7th week with another 2-2 record.

Share All sharing options for: Player of the Week: Week 7

Interesting week for Utah. They started strong with impressive wins over the Lakers and Spurs, but then seemed to lose focus and lost to both the Suns and Grizzlies. Are the Jazz an average NBA team? Their 13-12 record says so, and so do most fans. I also agree. But not because we have average talent, but because this team has been so bipolar this season. This team can be good, they've already shown us, we just need some consistency.

What a week for Mo Williams. He started it off by dropping 22 on the Lakers (8-11 shooting) and then obviously did this. But then, like most of the Jazz, his production dropped off in the next two games (just 11 points on 5-14 shooting). Mo led the team in assists again, and had 3.4 assists for every turnover. But lets talk about that shot. Was it the ideal play? No. Is he our go to player? Not really. So why did he take it? He's the team's the leader and he wanted to be the hero. I don't agree with it, but it went in and the Jazz won, so no complaints from me...yet. I do worry about this becoming a trend. While Mo has been shooting fairly well lately (he wasn't in that game, ironically) he hasn't been known to be a clutch shooter, Locke pointed this out on Twitter. Before Mo hit his game winner he had missed his previous 12 shots with the game on the line, he also is shooting 20% in the clutch this year (score within 5, last 5 minutes). Current Jazz team, game on the line, Jazz need 2, who you want shooting?

It was not a pretty week for Foye, who is finally starting to cool down. Foye brings shooting to this team, that's his role. So when he shoots 27.7% (5/18) from three, it's hard for him to be much of a contributor. That was the case this past week, Randy wasn't much of a contributor. It's actually pretty scary when Foye isn't hitting, because he's our starting shooting guard. Then again if those bricks keep coming, maybe he won't be for too much longer.

Marvin was quiet last week...again. It's not that he's playing bad, it's more of him not being super involved. He had one decent game vs the Suns, 11 points on 5-8 shooting (1st game all year where Marvin scored over 8 and the Jazz lost), but scored just 7, 6, and 2 in the other three games. I like Marvin, I think he's a good player and I think he can be a good player for this team. The Jazz just need to find a way to get him more involved.

Really nice week for Paul. He started it off with back to back 24 point games against the Lakers and Spurs (don't forget his big shot vs the Spurs either), then finished it off by scoring 12 points in both the Suns and Grizzlies games. He never shot below 50%. While the scoring and shooting is impressive, my favorite number has to be assists, his 3.5 was second best on the team. Paul finds a way to improve his game every year, is his passing the improvement this year? Not only is his 2.8 assists a career high, he's averaging 3.5 over his last 10 games and already has 4 games of 5+ dimes, he had just 6 games of 5+ all last season.

Not that bad of a week for Al, minus an ugly game in Phoenix. Al was key in both of Utah's victories. He scored 14 points (6-11 shooting) and helped hold Dwight just to 11 vs LA, then dueled Duncan and finished with 21 points (including 3 big shots in the final 5 minutes). Al also led the team in both blocked shots and rebounding. On the not so bright side Jefferson failed to shoot over 50% after shooting 56.8% last week (52.9% week before that) and didn't look as dominate as before, not to mention his -9.8 +/- was second worst on the team (Favors was the worst). Keep in mind his shooting numbers have dropped ever since that back injury.

If Watson and Tinsley can share backup duties, they surely can share a paragraph in this article. Seriously though, it is interesting to look at their numbers right next to each other. Last week I was undecided, then I started leaning towards Watson, and now the numbers say Tinsley. I still don't think I've decided. Neither are playing out of their minds right now, but according the numbers the team plays better with Tinsley on the floor. I know I've asked this more then once, but what say you? I just want Corbin to settle on one.

Yet another up and down week for Hayward. He played well vs LA scoring 14 on 11 shots, and was HUGE against the Spurs dropping 19, including 4 very important three balls. But then he completely disappeared vs the Suns (0-5 shooting) and was alright vs the Grizz (11 points, 3-8 shooting). I'm glad to see his assists go back up, but his shooting and rebounding still needs to improve. Serious question, is Hayward in a funk, or is this just how he's going to be this season? Neither would surprise me.

It was an alright week for DMC. He had a good game against the Lakers (10 points, 4 dimes, 3 boards, 1 steal/block,) and while he didn't score vs the Spurs, his defense was tenacious and he helped hold Manu to just two made field goals. His play in the final two games wasn't particularly great. Nothing to special, nothing to terrible, just an alright week for Carroll.

Favors continued to try and get back in his pre-injury groove last week, and is still a little ways away. I don't think he's playing bad, he's just not impacting games like he was before. Part of it might be the minutes, Favs is getting just 15.7 this month after playing 23.1 minutes in November. He's continued to open up his offense game, showing us a new move here or there. Maybe it's just me, but is he finishing less at the rim this lately? 50% from the field is far from a bad number, but with the shots he takes I feel like it could be higher. Maybe I'm totally wrong though. What do you think? Here's to good health and more minutes.

Great week for Enes, who was scorching offensively once again. His 71.4% shooting was an obvious team best and is starting to become a thing of the norm. Kanter is shooting 60% over his last 10 games and 55% on the season, which happens to be better then every player on the Jazz (besides Jeremy Evans). Sure, you can say this is a result of playing against bench players, which is partially true, but you have to give a ton of credit to Kanter. He's getting the ball and using both his size and post moves to get easy looks, and more importantly he's making them. Enes played well in all four games but played his best vs the Lakers scoring 14 points on 6-8 shooting. It's going to be very hard for Corbin to keep his minutes down if he keeps playing like this. 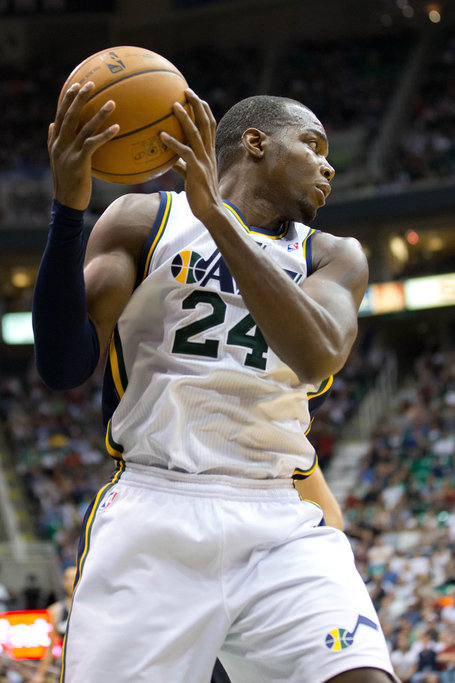