Utah Jazz Statistics: The defense has actually improved in one key area

Share All sharing options for: Utah Jazz Statistics: The defense has actually improved in one key area

No, this is not a troll post. The Utah Jazz are better on defense in one area so far this season. What is it? Well, we're no longer getting torched by the opposing team's starting shooting guard. Their collective sum of averages for points per game is 387.6 (or 14.4 ppg over 27 games); and we've only surrendered 391 total points to opposing SGs (14.5 ppg over 27 games). This IS an improvement. We're keeping the other team's starting shooting guards just at their average. 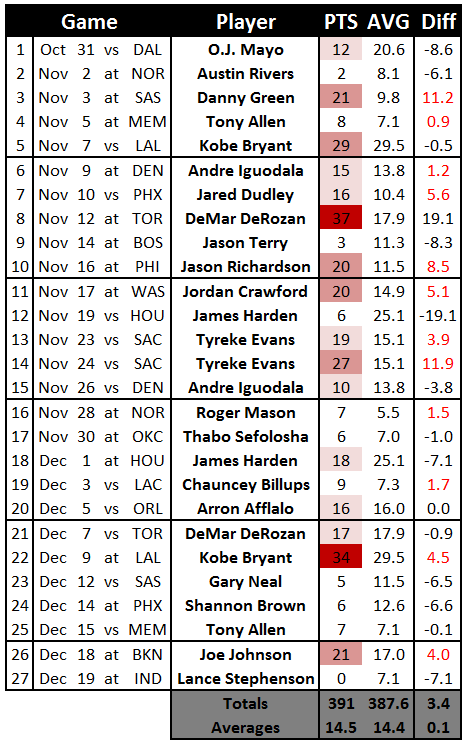 Of course, injuries, rotations, and line-up quirks all play into this. James Harden played only one half of one of his two games. Gary Neal isn't usually a starter. Sometimes a guy off the bench is usually a designated scoring 2 who is behind (for just the first 6 mins of the first quarter) a defensive two, like in OKC or Indy. There are a few quirks here, but this is something positive to say the least.

Also apologies if the site is waaay too negative. Hard to be upbeat after losing by 20 to the Pacers. Please know that you always have an open line to me via twitter @AllThatAmar or more discretely via email to my twitter handle at gmail.com.

Thanks again, guys, and let's make this a Jazz fan blog that everyone enjoys visiting!