The Utah Jazz go 2-2 in the 5th week of the regular season.

Share All sharing options for: Utah Jazz Player of the Week: Week 5

Another "meh" week for the Jazz. They went 2-2, winning the 'easier' games and losing the 'hard' ones. We are 5 weeks into the season and the Jazz really haven't had a nice week of basketball yet. I mean, they haven't been terrible, they've played pretty good in a few games. But through the 18 games the Jazz look pretty average, and their 9-9 record agrees.

After missing the DEN/NOH games, Mo returned to the starting lineup vs OKC and had an immediate impact scoring 7 points in the first quarter (he finished with 13 pts, 6 asts). He played even better against the Rockets, finishing with 16 pts and 7 asts. This is the Mo we like; the one who makes his shot (47.8%). He doesn't need to be our leading scorer or be the number 1 on O, he's just got to make his shots while playing the role of starting point guard. Can he keep it up, or will his play slowly decline again?

Talking about making shots, Randy Foye has been doing such lately. Randy had a great week. He continued his hot streak from deep, (11/23 47.8%, he's now 46.3% on the season) and for the first time all season started making his non-three point shots (7/14 50%). He had a monster game vs the Rockets scoring 20 points (4/6 threes) and dishing out 6 dimes. Foye averaged 2.8 assists on the week, not a bad number for a spot-up shooter. He's far from a perfect defender, but he's started making a few plays on defense, which is better than nothing. Randy has made KOC look very smart thus far, let's hope he can keep it up.

Carroll didn't have the best week.. Then again, it's pretty hard to shoot under 30% and have a good week. His shots obviously weren't falling last week, which we can't do much about. The 4.5 boards is nice, and 4 games without a turnover is awesome. So combine that with the usual hustle can you make up for the missed shots? Maybe, but probably not. DeMarre will need to up his play if he wants to retain his minutes, especially with Marvin returning and Burks again biting at the reins.

Just like the team, Sap also had a 'meh' week. He shot even worse than last week, and only made it into double digit rebounding once. Paul showed flashes out of breaking out of his slump, but nothing definitive. Millsap's been shooting 11 times a game this year, he shot 13 and 13.5 times in the previous two seasons. So he's not just making less, he's taking less (shots). Which brings me to the question, is that on him or on the team?

Good week from Jefferson. Once again he led the team in scoring, but for the first time all season he shot over 50% (for the week). He was HUGE against Denver, putting up 28 points on 10/15 shooting (8/10 from the line, nice). He also played well in Utah's other win, scoring 19 vs the Hornets. Al wasn't perfect though, he averaged under 8 boards and had more TOs then assists (pretty unusual for him). Give me a few extra rebounds and I'm pretty satisfied with his play. (Obviously not with his defense, but that's another story).

Funny week for Jamaal. He started it off with a fantastic game vs Denver where he scored 16 points (3/6 from deep), but then scored 0 points throughout the next 2 games and sat out the next. Tinsley's usually awesome AST/TO ratio was just 1.5:1. Don't be surprised if he continued to lose playing time, especially with Mo back as a starter.

Fairly empty stat line for Watson, but that's who he is. Earl had an alright week. He was quiet against DEN/HOU, and was much more active in the NO/OKC games where had 16 dimes in just 30 total minutes (that's 25 per 48). Hopefully he can play better as he continues to get healthy. Do you think he's earned the reserve role back?

Decent week for Gordon, who has continued to come off the bench. He didn't shoot particularly well over the week (had games of 1/8 and 6/18) but did have one nice game against the Rockets (21 pts, 8/12 shooting). There has been a lot of talk of Hayward breaking out this year, this hasn't happened yet,. In a matter of fact, a lot of his numbers are down from last season, including FG%, 3PT%, assists, and rebounds (also, his turnovers are up). Does this concern you, or do you still see Hayward breaking out this season?

Not a ton to say about Marvin (missed last 2 games) but I will say he did look good before he hit his head. He only played two games, but shot 50% from the field and 57% on this threes. He's been making plays on both sides of ball as well. Get well soon Marv.

Ask and ye shall receive...eventually? DNP after DNP, Burks finally made it back into the rotation (for the final 2 games). He didn't do much in his first game back against OKC (just 1/5 from the field) but had his best game of the season vs HOU, where he scored 11 points on 4/7 shooting (1/2 from deep). I know we haven't seen a ton of Burks this year, but until that last game he wasn't giving much reason to play him. I'm crossing my fingers this last game gets him in a groove, which should earn him back a permanent spot in the rotation.

Great week for Favors, until he got hurt :(. Seriously, Favs has been on a tear lately (those numbers convert to 20 points, 12.3 rebounds, and 2.8 blocks per 36). His injury really comes at a bad time, for himself and for the team. Hurry up and get better.

Enes looked pretty solid last week. He has struggled to do a ton in his limited time lately, but that wasn't the case against the Thunder. He scored 18 points vs OKC in just 15 minutes. Hello preseason Enes? Maybe, maybe not. That was just the 2nd time this season Kanter scored in double digits after averaging them in the preseason. We probably won't see a ton of games like this from Kanter unless he can up his playing time, which is up to Corbin, who also has to find time for Jefferson, Millsap, and hopefully Favors soon. 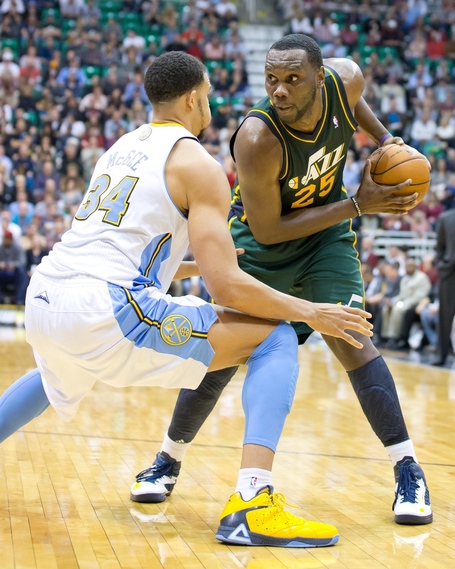