Player of the Week: Week 11

The Utah Jazz finish their 11th week with a 3-1 record, going 2-1 on their Eastern Conference road trip.

Share All sharing options for: Player of the Week: Week 11

The Jazz were one late collapse away from beating the Hawks and going 4-0 last week; unfortunately Devin Harris had other plans. Overall I still think it was a pretty good week. Beating the Mavs at home and the Bobcats/Pistons is nothing to brag about, but I saw a lot of solid basketball, and some much better performances from our starters. It's also a good sign the Jazz are winning the games they are supposed to.

Jamaal did alright last week, but he is an obvious drop off from Mo Williams, and a large one at that. He did a pretty good job running the offense, his assists/TOs translate out to 11.3/4.5 per 36, but that's not the problem, his offense is. We don't need him to go and drop twenty points every night, but we do need him to be respected on offense, and that isn't happening. Defenses are leaving him wide open on the perimeter, daring him to shoot (which he is). The shots aren't falling however, Tinsley shot just 3/11 (27%) from deep last week and is shooting 31.7% from there on the season. Jamaal was also the only starter with a negative +/-. Start ripping those nets, Jamaal.

Not a bad week for DMC. He isn't putting up big numbers, but it's great to see him shoot over 50% while continuing to wreak havoc on the court. Is it a coincidence that Carroll starts and suddenly all our are starters (minus Tinsley) have positive +/-'s? Maybe, but energy is very contagious, and I've really liked what I have seen from our starters lately. Whether we credit DMC, the competition, or maybe a little of everything I don't know, I just want it to keep happening. Also big props him for his great D on the final play of the Detroit game.

Another solid week from Paul, it's really good to have him back, I really think he may have been hiding an injury earlier this year... Just like his stat line suggests, Paul did a little bit of everything last week. Sap was second in scoring and rebounding, third in assists (he had two games of 5 assists), and was also second in both steals and blocks, he even had the second highest +/- on the team. Sap probably won't ever be the main piece to a title team, but he sure is a helluva supporting one.

Jefferson has been a straight up beast lately. Not only did he lead the team in scoring, rebounding, and steals, he finished the week with 12 dimes to just 4 TOs. He has been attacking the basket with an attitude lately, and has been embarrassing more then a few of his defenders. This is what I have always wanted from Al. The legit post moves + aggressiveness + passing out the post + solid rebounding. Keep it up Big Al!

Not the best week for Earl. I mean, I don't expect a ton from him, I just want him to manage games and help secure w's. I don't feel like we are getting that from him though. Like Jamaal, he is being left open on offense and can't make the defense pay for it. Combine that with him having the worst +/- on the team and it sure seems like he is hurting more then helping.

Really nice week for Burks, who might slowly be finding his place with this team. Burks only had one bad game last week (0/3 FG vs Det) scoring 37 points on 23 shots in the other three. He isn't shooting at an insane rate or anything, but he is getting to the line and even making some three's (3/7 last week). Corbin has done this thing where he hands over some of the backup PG duties to Burks, and oddly enough it's been working. While I highly doubt Burks will ever become a full-time PG, bringing a scoring threat to the position (with underrated passing skills) seems to be a pretty good idea for this team.

Up then down week for G. He started it hot, dropping 27 on the Mavs and making 8 of his first 10 threes (big ups to him for working on that shot!) but cooled down as the week went on (0-4 from deep vs ATL, 2-7 FG vs DET). It's good to see his assists and rebounds to go back up as he been more focused on scoring lately. I continue to like Hayward coming off the bench, what about you?

Not a terrible week for Derrick, just kind of a quiet one. He had some nice games vs Bobcats (5-5 FG, 6 Reb, 3 Ast) and Pistons (3-5 FG, 3 Reb, 2 Ast), but besides some very physical play vs Dirk he wasn't much of a factor against the Mavs and was obviously nervous in his return vs the Hawks. Favs actually had the highest FG% on the team (took just 14 shots though) but I do think he is going to that jumper a little to much lately. He'll need to step it up if he wants some minutes back, especially with the way both Al and Paul are playing.

Enes hasn't been much of a factor of late. He did okay vs the Mavs and Pistons (5-8 FG, 8 Reb) but isn't coming out and making a big difference like we have seen him do. It should be noted that his play dropped off after he returned from that ankle sprain.

Player of the Week: Week 11 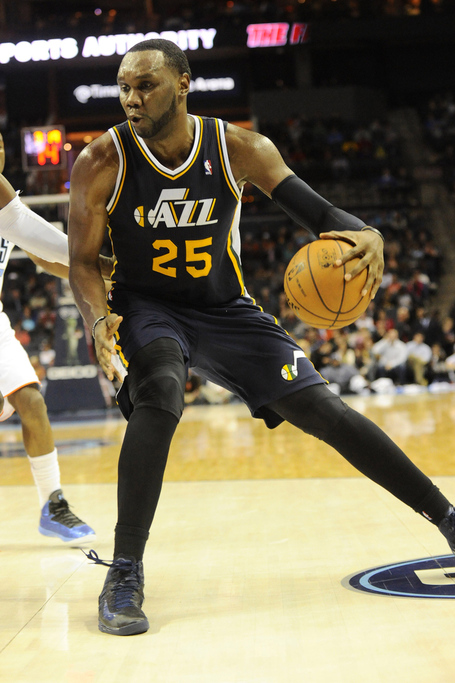