The Utah Jazz went 2-0 in their 12th week of regular season ball.

Share All sharing options for: Utah Jazz Player of the Week: Week 12

Pretty good week of ball for the Jazz. They won both their games, which included an impressive W over the Heat and another home W against CJ and the Cavs. Of course I'm happy with the wins last week, but I've really been impressed with the way the team has been playing. The ball is being spread around, the team seems to be on the same page, and if feels like the Jazz are ready to take advantage of this schedule and move up in the standings.

Alright week for Tinsley. He played well vs the Cavs (5-7 FG, 4 AST 0 TO) but wasn't as great vs Miami (1-7 FG, 7 AST 5 TO). Teams are still leaving him open on and he shot 2-7 from deep last week, that needs to improve or he needs to reduce those shots. On the bright side our team is starting out much better lately and he had the highest +/- on the team.

Good stuff from Randy last week. He went 11/21 from the field and made 7/12 threes (58.3%). He also finished the week with 3 steals, 5 dimes, and just 1 turnover. I could be wrong, but it also seems like Randy is opening up his offensive game a little better lately, doing more than just shoot threes. I really like what we are getting from Foye right now, question is will it last? We've seen him go on a cold streak once already, is he due for another?

Rough week for Marvin. He obviously didn't shoot or score well, and frankly hasn't made much of an impact of late, especially when you consider the amount of minutes he's playing. The good news is he isn't holding us back. This team has the depth at the wing to still win without needing big games from him. The bad news? Well he simply isn't playing well, and he's proven to help our team out a lot when he does (The Jazz are 14-6 when he scores 7 or more points..).

Millsap didn't shoot particularly well last week, but still played pretty good overall. The main reason his shooting isn't dragging him down is because he is making it to the FT line much more this year. Paul's career avg of FTA per game is 3.6, he's averaging 5 this season. Sap made it to the line 10 times against the Heat and made 9 of them. It was also nice to see him finish the week with 4 assists to just one turnover. It will be interesting to see if all the trade talk effects his play over the next few weeks.

More good basketball from Jefferson this week. He led the team in scoring, rebounding, and steals (tied), and even had the second best +/- to boot. Al is far from a perfect player, but his transformation to becoming a better team player and leader has been awesome. Al has always been able to get his, problem is it has usually been on really bad teams. That's slowly changing. If I told you four years ago that Al would be a (possible) all-star and a top dog on a (possible) playoff team in a stacked Western Conference would you believe me? I know I probably wouldn't.

Nothing fancy, but a good few games from Earl last week. My favorite stat from him? 12 assists to just 1 FGA (he missed it). Earl understands his role on this team (run the bench, don't really shoot...) and he's been doing it much better lately. Oh and that 6:1 ast:to ratio? Not bad either. Keep it up, Earl.

Up and down week for G. He started it off with a HUGE game against the Heat which included 22 points, 3 treys, 4 dimes, and the dagger. But then he vanished against the Cavs, scoring just 5 points on 2-10 shooting. While I hate seeing Hayward disappear at times, he's actually been pretty consistent lately, scoring 12 or more points in 9 of his last 11 games. It's also good to see him continue to help facilitate the offense, one of his underrated and often under-utilized skills.

Awesome week for DMC. Carroll has been working on that jump shot, and boy has it been paying dividends. He shot 10/14 on the week, and has looked great from outside. Don't forget the hustle and energy either, DeMarre was third on the team in rebounding and tied for first in steals. The most impressive part of his week? He did it all in just 16 minutes a game, that's pretty crazy.

Nice bounce back week for Favors. He was quiet, yet solid vs the Heat (7 points, 3/4 FG) and really came up big vs the Cavs scoring 19 points and grabbing 8 rebounds. Just like Locke mentioned in his daily tipoff, Favors is taking his time in the post and it's helping his game out a lot. It's been fun to see all the different moves from Favs. The jumpers, post moves, his usual aggressive attacking. Can you imagine if he can find a way to put them all together? 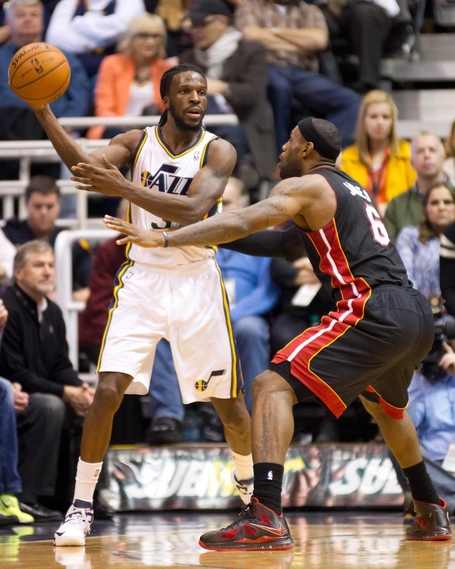