Share All sharing options for: Utah Jazz Player of the Week: Week 13

I'm going to go ahead and say it was a good week for the Jazz. While the win against the Wizards wasn't pretty, it wasn't as bad as it seems considering they've won 7 of their last ten against numerous good teams. The loss against the Lakers definitely stings, but surely wasn't as easy as many of us thought it would be. And finally the OT victory (that included lots of big plays, good and bad.) against a very good Pacers team.

Tinsley had a pretty decent week. He didn't help out much scoring wise besides the Washington game (5-11 FG, 11 pts) but has continued to run the team nicely (21 dimes, 6 turnovers). I'm still a little frustrated with his shot selection. I understand there are situations where he should shoot, but no fan of his deep threes earlier in the shot clock (2-8 3PT).

Yet another good week of shooting for Randy Foye. He shot 50% from the field and the exact same from deep (6/12). Another nice number is his nearly 3 assists to just one turnover a game. As a specialist, Randy is obviously not the perfect player and can only help out in oh so many ways. That being said, Foye is definitely on fire and I think he's earned himself a trip to All Star Weekend. He's made 27 of his last 47 attempts (57.4%), is 4th in the NBA (among those qualified) in 3PT% this season (44%) and is 8th overall in 3 pointers made (100).

While Marvin did shoot a little better this past week, his play has still been pretty meh. It's disappointing because it seems like he starts out games (72 FG's, 45.3% shooting, first half) much better than he finishes them (43 FG's, 39.8% shooting, second half). His minutes have gone down from nearly 30 at the start of the year down to around 24. Would he be better in a role off the bench? Or should Corbin keep him where he is?

Great week for Paul Millsap. His shot has been on (was third on the team in FG%), he's been more aggressive lately (this one to), and he's been doing a lot of other things on the floor. His most impressive stat is probably his team leading 4 steals a game, but being first in rebounding and blocks isn't a bad thing either. The only down side of his play has been his turnovers (3 a game last week to 1.7 assists). Sap can force it a little a times, which results in either bad shots or turning the ball over. This is why I don't see him ever being the center piece in an offense. That being said, Millsap is playing some much improved ball over the past few weeks and credit it definitely due.

Slow start, but good end for Big Al this week. He started the week missing his first 6 shots vs the Wizards (finished 5-17) and the slump carried over to a 5-14 performance against LA. Luckily he got back on track in the Pacers game where he dropped 25 points (11-21 FG, 6 reb) which included some really clutch play towards the end (13 points in 4th/OT). The Jazz need Al to succeed more than any other player in order to wins games, when he's struggling it's obviously much harder for us. We are 11-1 when Big Al shoots over 54%, when he doesn't? 13-19.

Not a bad week for Earl Watson. He's not a great player, and probably wouldn't be in a lot of NBA's rotations, but it's hard to ask for much more from him at this point. He did shoot well, even with his limited attempts, but I was more impressed with him finishing the week with 11 assists to just 2 turnovers. It also feels like he has picked up the intensity lately, especially with the hustle plays (he made multiple vs the Pacers down the stretch). Oh yeah, it's also been fun to see him and Favors hook up (multiple times), although it does make me miss Jeremy Evans :( .

Solid week for G. His shooting has gone a little down lately (0-6 on treys last week) but he still scored 43 points on 34 shots which isn't terrible. I specifically like seeing him average 4 dimes a game. Hayward is a top 2 or 3 facilitator on this team, if not the best. He did have 6 turnovers against Indiana (just 1 vs LA, WSH) which included a few that nearly cost us the game (in regulation). This can be concerning, and it is to a degree. Hayward was making big plays for us, then nearly lost us the game. However I think it will be a good learning experience for him. The Jazz are slowly giving him a bigger role in the 4th quarter and he is starting to adjust, there will be bumps in the process. Just like Jimbo said in this week's Utah Jazz Podcast, I want the ball in Hayward's hand to end the game.

Up and down week for Carroll. He had a rough start (0-4 FG, 1 point) vs the Wizards, wasn't in the rotation against the Lakers (which hurt us IMO, could have used his D vs Metta/Kobe) and got back to his game vs the Pacers (4-5 FG, 9 points, 2 steals). Spence and Jimbo talked about this a little in their podcast, do you guys think DMC has earned himself another contract? And if so, what length and amount? (I'm going with yes here).

Good ball from Favors this week. He's continued to be pretty active on defense (was surprising to see him finish the week with just 1 block, though) and is playing well on the offensive side of the ball to. Seeing him shoot just under 60% is great, and something we should expect from his skill set really. He is also starting to make that mid range jumper. Which excites me, as long as he doesn't start to rely on it. Favors has been playing good basketball for awhile now, and it makes me wonder how well he'd do with a bigger role.

The Big Turk also had a pretty good week, despite playing just over 10 minutes a game. He was 7-10 from the field vs IND/WSH but just 0-1 in LA. He also had just one turnover all week (0 assists though) despite taking 11 shots. It's hard to judge Enes right now because he is playing fairly good ball in a really small role. He's the 4th best big on our roster, all of which are really talented. Is he ready for more time? Probably. Is he going to get it this season? Maybe, but that's really up to DL and KOC. 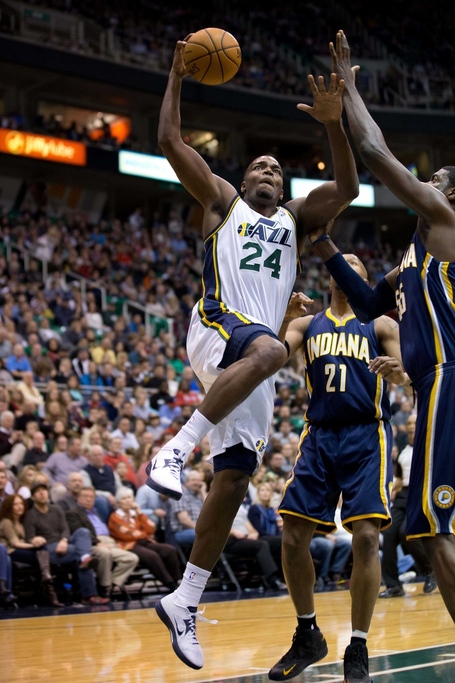 Paul Millsap powers his way to this week's award.