Player of the Week: Week 10

The Jazz finished their 10th week with another 2-2 record.

Share All sharing options for: Player of the Week: Week 10

Average week for the Jazz. They lost two games on the road to two solid teams (DEN, LAC) but also got a W in Phoenix and won comfortably at home vs the Wolves. This team still has a long way to go if they want to make the playoffs, but it will be nice once the schedule starts to get a bit easier.

Not that bad of a week for Tinsley. Jamaal actually led the team in FG% and along with Millsap was the only other Jazz man to shoot over 50%. Tinsley also did a pretty good job of spreading and taking care of the ball. While 6 APG doesn't look special it actually works out to be over 9 per 36. And as far as turnovers, Tinsley had one game with an excessive amount (5 vs LAC, had 11 dimes) and then had just a total of 3 in the next 3 games. Oh and he also did this.

Not the best week for Marv. He did finish with a decent game against the Nuggets (13 points, 3-6 3PT) but was pretty sub par in his others (he missed the Clippers game due to his knee). Just like Foye I like Marvin and think he can be a good tool for this team (we're 10-3 when he scores in double-digits) but it feels like he isn't being used right. I'm far from an expert though, and Hawks fans did warn us about stuff like this. What do you guys think, is Marv being utilized wrong or is this just the player he's going to be for us?

A few interesting stats from Sap last week, which turned out to be pretty good overall. Against the Wolves he only missed once (7-8 FG) but finished the game with ZERO rebounds. He's continued to pass well, averaging 2.8 dimes on the week. And once again, he led the team in steals with a pretty insane 3 per game (which included a 5 steal night against the Suns. While I definitely miss parts of the old Millsap (specifically the rebounding) I love all of the new things he brings to the table.

Up and down week for Al. His best game was vs the Clippers, where he was a complete monster scoring 30 points on 59% shooting. Jefferson also played well against the Suns (21 and 8) but then struggled in both Minnesota and Denver games. As the 1st option on offense Big Al needs to be more consistent. He's shooting a career low right now and is averaging his lowest amount of points in 6 seasons. That being said I did notice some good things he's done. Al had two games of 4 blocks last week, which may not necessarily mean he's being an overall better defender but it is showing a better effort to protect the rim. Al has also made it to the FT line 23 times in the last 5 games, not special, but 4.6 FTA is definitely better then his season average of 2.9.

Earl hasn't been awesome this season but I actually liked what I saw from him last week. His shooting was bad, but that's been a norm this season as he is shooting a career low. His play making was much better on the other hand as he finished the week with a 4.6:1 assist to turnover ratio which included games of 9 assists (24 mins) and 8 assists (19 mins).

Carroll played the least amount of minutes among rotational players last week and it's not too hard to see why. His shot hasn't been falling and his style of defensive play can and has made him a liability on both ends of the court. The hustle is there though, and it showed up in his rebounding last week, specifically the first two games where he grabbed 15 boards in 38 minutes. DMC can also be a great spark off the bench, key word being "can" as his +/- suggests he wasn't so much of one last week.

Alec has continued to get some minutes off the bench (9 games w/o a DNP and counting :) ) but still isn't playing to the level many of us have hoped for him to. His 36% shooting is a bit concerning, especially when you consider his best skill is getting to the rim and taking high percentage shots. His ability to draw fouls can make up for the poor shooting (he scored 23 points on 22 shots last week because of it) but he obviously needs to get that percentage back up if he wants to be more efficient. Now I don't want to seem like I'm bagging on Burks, he's in a pretty tough situation considering he's getting inconsistent minutes and is arguably behind less talented players on the depth chart. However that doesn't mean he can't get better. One thing I'd REALLY like for Burks to work on is his FT's...Did you know that Favors is shooting a higher percentage from the line this season (71.8%) then Burks is (57.6%)?

Not a bad week for Gordon. He's continued to score off the bench as he was second on the team (in scoring) last week despite being 6th in minutes. It has also been nice to see him slowly find his three point shot again (46% last week, 38% on the season). But perhaps the best thing he did all week was turn the ball over less, and I mean a lot less. Dig this; in the past 5 games G has turned it over just 5 times, the 5 games before that? 14 times...improve every day right?

Minus his 1-6 performance against the Nuggets, Favors had a pretty solid week. His rebounding was great (led team last week in just 23.4 minutes..) as well as his D (second on team in both blocks and steals last week). While his shot selection has been a bit iffy of late, I LOVE the way he has been getting to the rim lately. He even averaged 2 APG (that's more than Marvin, Hayward, Burks, Foye, and Kanter). However, like I said, the shot selection can be improved and I feel like he's been forcing it in certain situations where he shouldn't (hence the low FG%?).

Player of the Week: Week 10 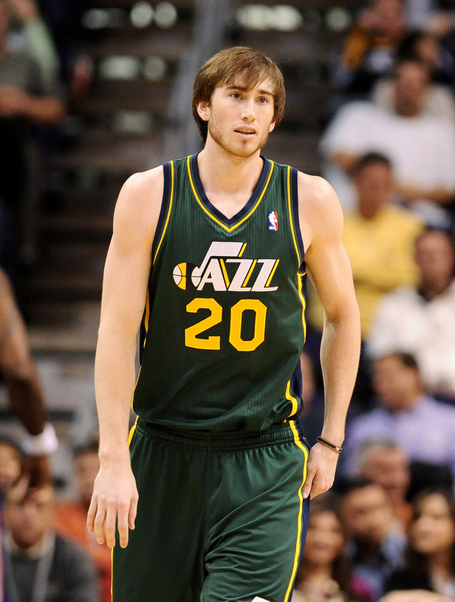