Gestalt Offensive Rating (GO Rating) is a formula I made up years ago that I haven't been pushing lately. It attempts to find out how much pressure a player puts on the defense when he's on the court per a fixed time (33.6 mpg -- which is more accurate to starters minutes than 36 mpg). It's a complex formula that looks at Assists, Free Throws, Offensive Rebounds, Shooting, Scoring, and Turn overs. Each section is weighted by different factors and graded against quantitative means for the last 25 years of NBA History. (So it's apples to apples with "this era" as much as possible.)

In today's downbeat some people went loco (which is fine, we're all sports fans here). The end result is wondering about Utah Jazz guard / forward / everyman Gordon Hayward. In order to see how volatile he is (does he display steady improvement, or he is two steps forward, one step back?), it was suggested that we look at the Go Ratings. I was flattered.

Let me first preface that GO Rating is a specific measure that looks at how much pressure you put on the defense. It's not more important than things like fg%, ppg, apg, or whatever. It's not more important than PER. And for me I think it's just one thing to look at when looking at stats, you still need to look at things like USG% and ORTG, etc. Stats are fine, but they also don't tell the whole story. For example, I'd love it if there were stats for attempted screens set, and successful screens set. GO Rating works with the stats we have handy now -- and as a result, most of the offensive stats skew towards players with the ball in their hands. Right now that works out because Go Rating essentially measures how much aggro you have with the ball anyway. A guy like Allen Iverson is going to draw more defensive focus than Ray Allen -- though Ray is a more dangerous shooter.

I've written about GO Rating a bit, and the links are in my sig. But here's a quick primer on what the numbers get us, they get us different ranks. I've inputted the info for every All-Star over the last 30+ years and I have a huge chart. Let's make it easy by looking at some of the values as a frame of reference:

So, let's look at Gordon, shall we? (Note: these charts and tables aren't fancy . . . but I instead took the time to double check the numbers instead of making it pretty.) 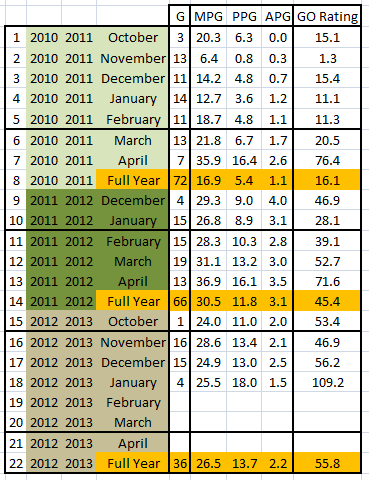 In each of his years Hayward starts off slow, and builds up towards the end. In his rookie year his first month (Oct 2010) had him getting a 15.1 GO Rating. He ended it in April 2011 with a monthly GO Rating of 76.4. So according to the frame of reference, he starts off playing like a replacement level player, and finishes his rookie year as a legit 2nd option. His second season has him starting off in specialist territory, dipping down, and them returning to the land of legit second options.

Third season? He started out as 3rd option material, dipped down to specialist, and has arisen to playing (in 4 games, so sample size alert) like an All-Star. Paul Pierce has a GO Rating of 108.7. So far this month Gordon's at 109.2. Will it last? I really don't think so as a huge part has been his amazing three point shooting this month (9/14).

This is what it looks like month by month: 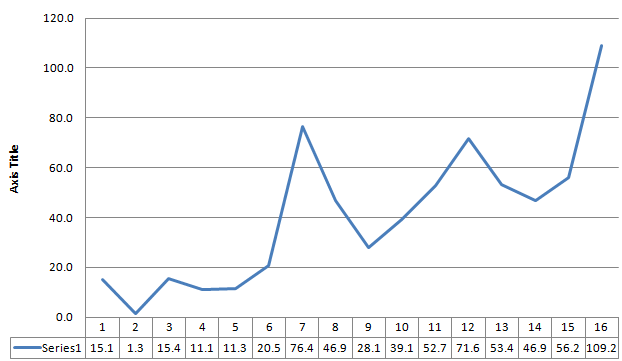 Every season he starts off slow, but the closer we get to March madness the better he gets. That's not really it though, it's that he's given more MPG and can do more and has more responsibility with the ball. It's hard to have a great GO Rating when you're the 4th option and chopped liver on the floor. When you put the ball in Gordon's hands he's more able to prove his worth on the court with his assertive play.

It really seems like there's is a pattern though, to slow starts and strong finishes. Let's compare the three seasons by month: 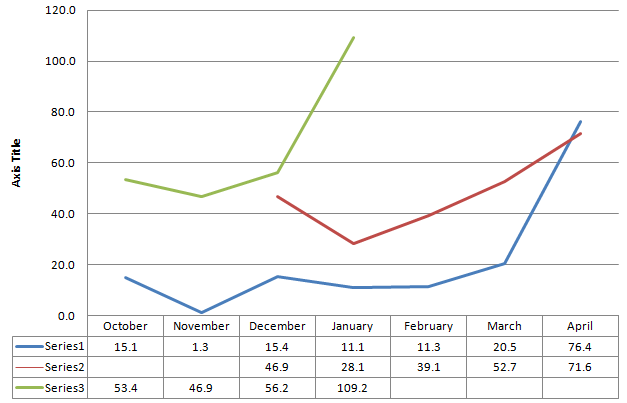 Yes, it seems like he crescendos every year. He's doing it a little early right now -- but again, this January is only 4 games long so far. STILL, it seems to suggest that he's not super consistent, but gets better as the season goes on. We'd hope that this would mean he's awesome for the playoffs -- but last seasons' playoffs wasn't anything to write home about. It was over before it started so I didn't bother to find out his GO Rating for the playoffs. Everyone on the entire team played poorly except Al Jefferson, so I'd throw that data out for Gordon, but keep that feather in the cap of Big Al.

Monthly variations will occur for every player though, the season is long and there are ups and downs. Let's look at Gordon's progress (if any) from season to season: 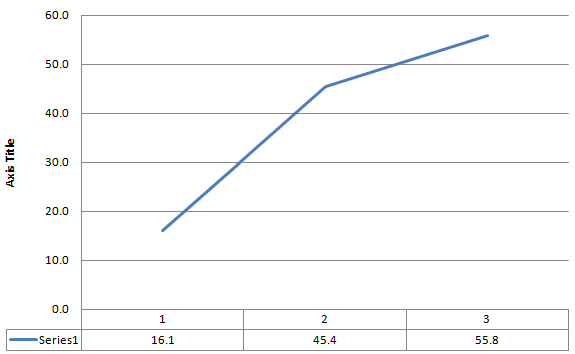 So there it is, he gets better. His cumulative Go Rating was replacement level as a rookie, and he worked towards specialist level in his soph year. Right now he's a legit 3rd option. Or at least that's what the data tells us, and the data is built upon frames of reference that's finding out the career Go ratings of every All-Star player (and many non-All-Stars) from the last few decades. He's getting better on offense, and it shows in the box score, in the spread sheet, and on the court.

And that's kinda what we want. Out of all four of our C4 players you could argue that Hayward should end his career with the highest GO Rating, and right now he's showing that he's competitive. Who's in that 53-59 range in Go rating (because he's at 56 this year)? Guys like Rasheed Wallace, Mehmet Okur, Vin Baker, Wally Szczerbiak, Otis Thorpe, Rickey Green, Zydrunas Ilgauskas, Danny Manning, David West, and our very own Devin Harris / Josh Howard crew. WOO! HE"S FINALLY AS GOOD AS JOSH HOWARD, CAN HE HAS THE BALL PLEASE NOW?