Utah Jazz offensive struggles appear to be no passing fancy, or no passing, period

Share All sharing options for: Utah Jazz offensive struggles appear to be no passing fancy, or no passing, period

The Utah Jazz have played 7 games so far this season, and lost each game. Worse still, the Jazz lost the first two games (Oklahoma City and Phoenix Suns) by a TOTAL of 6 points. Then lost the next game (Houston Rockets) by 11, then Utah when on a four game road trip where they faced the Brooklyn Nets, Boston Celtics, Chicago Bulls, and Toronto Raptors -- the losing started at 16 points, then got worse and worse. Utah limped home on back to back 24 point losses.

The team isn't getting KILLED on defense, while yes: the Jazz are in the bottom third in opponents points per game; but it's not like we're last. We are last in offense, and the difference is that so far this season the Jazz are losing by a MARGIN of 13 points per game. The defense isn't great, but it's the offense that's the problem.

Well, we should call it the awfense at this point, because it's awful.

Sure, a huge part of that is based upon having to run guys who are clearly back ups (John Lucas III - 27.4 mpg, and Jamaal Tinsley - 14.0 mpg) at minutes beyond their abilities, against starting point guards. Trey Burke, a rookie, will help a lot when he gets back -- particularly in spot up shot making -- but he can't be a savior. These offensive struggles are a team struggle. And the team is going to have to work on it together to get out of it.

If you explain offense to a kid it involves a few things:

I think this team has enough dribblers. I know the team sucks at moving without the ball (especially if you look at our weak-ash screens). And both of those things influence the types of shots people can get. The one aspect that I think we can clearly improve on is passing. So let's look at passing.

Utah has a problem, but I think it's a problem that can be sufficiently solved by the main players on this team, ball handlers Gordon Hayward, Alec Burks, Jamaal Tinsley, and John Lucas III -- and bigmen Derrick Favors and Enes Kanter. Our team right now is a big pile of Lego blocks. Without a plan we're going to look horrible, but the pieces are right here to make something really impressive.

Here's a table that shows every player on this team, and the number of games they have played, their minutes, and how well they have passed against how frequently they turn over the ball. In addition to that, I've included their USG%, AST% and TOV%. Those are advanced metrics, but they collectively can help identify which players are doing the "most" when they are on the floor. (*Most* does not mean the best, you can do a lot, and be bad at it . . .  kinda like how frequently I post articles about the Jazz. Ooooh, self burn.) 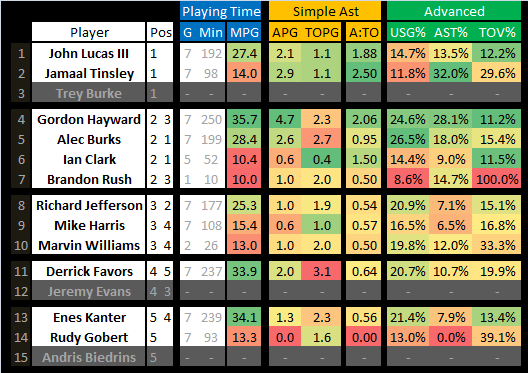 There are six players for the Jazz playing more than half the game: John Lucas III, Gordon Hayward, Alec Burks, Richard Jefferson, Derrick Favors, and Enes Kanter. Of these guys you could argue that the main ball handling SHOULD be coming from John, Gordon, and Alec. Not surprisingly, those three guys are among our APG leaders this season -- except, well, Jamaal Tinsley who is barely playing more than one quarter of each game on average is actually 2nd on the team in APG, and actually first in Assist to Turn Over ratio. Why isn't this guy playing more? I don't know.

Lucas plays a lot but does not really do a lot on the floor. His USG%, AST%, and TOV% are all under 15%. You figure that in an egalitarian distribution everyone should be at least at 20% of SOMETHING when they are on offense (because there are five players, and one fifth is 20%), and as a point guard who handles the ball a lot he should be doing something well. Jamaal, for example, is nearly at 30% on AST% and TOV%. He's not shooting a lot, but he's distributing or will die drying.

Our primary finishers (Derrick Favors, Enes Kanter, Gordon Hayward, Alec Burks, and Richard Jefferson) ALL have USG% above 20%. In the finisher role they are doing "okay", but only Hayward is also dishing the ball well when it comes to AST%. Burks is harder to figure out, he's #3rd in APG this season for the team, #4 in MPG, #3 in AST% (yes, he's passing better than John Lucas III is), but his turn overs are worrisome. Beyond the small sample sizes for Marvin Williams and Brandon Rush, and the non-ball-handling-ability-ness of Mike Harris, Burks has the worst TOV% on the team for point guards, shooting guards, or wing players. So that's clearly a qualifier that dooms him.

My idealized starting 2 guard is someone who is capable of handling the ball a little, and having a positive Ast:TO ratio. Right now Burks is not that guy, but Gordon Hayward sure looks like it. From watching the games we believe that Hayward is actually playing better than his performance indicates. By listening to some Jazz commentators, we are led to also believe that Alec Burks is weaponized Hanta virus in basketball player form.

All people see to agree that John Lucas is out of his element here playing starter minutes though. But let's go deeper.

The critical section in this table is the "Expanded assists per game" section. Here we list APG (Assists per game, as normal), "FT APG" (the calculated APG if made FTs by your teammates counted), and "2 APG" (which is APG if you got some points for being the 2nd pass to the assist, or the "Hockey assist"). Together I add it all up for "xAPG" or Expanded Assists per game.

But this information, while cool on its' own, doesn't mean much without a frame of reference. We also get "Ast Op per game" which is the number of 'attempted' assists per game from each player. Effectively we FINALLY have access to data that can come close to approximating something like FGM and FGA, but for assists. No, really, this is cool. Because we THINK we see guys like Gordon driving in, dishing off to guys outside, and having them clang shots. I've made AC% (assist completion, which is APG / Ast Op per game; which is like FGM/FGA), and AC' % (AC prime %), which is xAPG (extended) over Ast Op. It's not perfect, but here we try to see if an individual's assist attempts are maximized or not.

Yup, Hayward averages more than 11 assist attempts per game, but guys are missing shots. Guys are only making shots on 41% of his assist attempts, but his AC' (AC prime) number is almost at the 2/3rd level. That's good. What's not so good is Alec Burks -- but the question is: do these numbers better reflect an individual abilities to pass the ball to guys in scoring position, or reflect on the shot takers ability to score? When Burks is on the floor he's on the floor with worse players than Gordon for the most part. And his passing attempts yield ever WORSE results -- 37% and 51% when Gordon's was at 41% and 66%. Those are our two primary assist opportunity guys, and both aren't killing it.

Two players are doing okay. The first is John Lucas III, mainly because he gets almost as many hockey assists per game as he gets real assists per game. He's not making an active positive impact on the boxscore, but his willingness to pass to the guy who makes the assists shows up here. And his AC' % is above 70%. The other player, the most surprising player here, is Derrick Favors, and out of our main minutes playing players, he leads the team in Assist completion % and Assist completion prime %. So maybe we need to stop talking about how "bad" he is on offense if his passes actually result in scores?

Bottom line here? Both Hayward and Burks assist numbers suffer from being on the floor with poor outside, spot up shooters. SO far we're only giving Hayward a pass for this. Alec's numbers would get better too if more guys on the floor with him could make shots. The return of Brandon Rush and Marvin Williams should help. John Lucas is still playing a lot of minutes, but if your main contributions as a point guard are hockey assists then, well, maybe you shouldn't be starting.

Okay, we've looked at simple passing, and broken down passing. That's part of an offense for sure. But just, basically, having the ball and doing something with it makes a huge difference -- especially if you are playing a lot of minutes. This table shows playing time, and also shows average time of possessions with the ball. Then I created a "Ball%" which is the percent of time a player has the ball in his hands over the total time a player is on the floor.  This table also shows PER (which some people like, some people do not like), and shows how many touches a player gets in a game. There are "all", "Front court" (which is your team on offense passed the half court line), "close" (think post ups and cuts), and "Elbow" (think pick and pops or isolations) categories which denote receiving the ball in those locations. The last section (yellow) shows points per game, points per possession (N.B. table says PPS, but it's PPP from MySynergySports), points per touch (all), and points per front court touch.

The data mostly speaks for itself:

John Lucas leads the team in having the ball in his hands for the most minutes per game, and he is #2 in ball%. Yet this is the same guy with USG%, AST%, and TOV% all under 15% (a normal baseline for a starter should be 20%, higher for a point guard). So he's on the court with the ball in his hands the most, and does little else besides missing three pointers and making hockey assists. Oh, and his assist package is worse than Alec Burks, who does more with the ball to help his team score. (Assist opportunities has Burks at 7.1 and Lucas at 5.7 per game) Of course, you can't start Alec Burks because, clearly, the evidence shows that he's not a point guard.

Of course, the same evidence displays that John Lucas is not one either. BRING BACK RAUL NETO and TREY BURKE!

Beyond our point guard problem, we see our best finisher is Enes Kanter right now, and our best player is Gordon Hayward.

But what is the solution to our offensive problems? Well, we need to make better passes, and pass to players who can make shots. Passing the ball, continually, to guys who are not able to make the shots they take is a surefire way to suck on offense. Of course, you can only pass the ball to the guys who are on the court. One guy who is demonstrating that they should not be on the court is John Lucas III (27+ mpg). Jamaal Tinsley isn't a better shooter, but at least he gets other guys involved. And yes, Trey Burke is going to be a guy who can at the very least play point guard like an Eddie House type and spot up and hit open jumpers that are wing penetration kick outs.

I'd like our bigs to set better screens, and for our coach to call post ups to non-bigs sometimes. (If we demand that Gordon Hayward start at the 2, and isn't able to use his dribble moves against small forwards, then post him up against shooting guards, he's 6'8 after all!) At the end of the day it just looks like Tyrone Corbin is trying to do things on hard mode, instead of identifying which of his players is good at something, and letting them do that thing.