Last night the Utah Jazz (1-9) lost to the San Antonio Spurs (9-1). Sure, the Jazz are the worst team in the Western Conference, and the Spurs are the tops. That's fine. But let's not suggest that is all there was to the game. The Jazz were leading after one quarter by 13 points, their largest lead after the first quarter of the season. Utah maintained a healthy lead at halftime, and even increased it after three quarters of play. This was the first time in the season for the Jazz where they were leading going into the fourth quarter. Of course, the Jazz lost. Such has been the poor fate of the Jazz this season that the Spurs, who dominated 31-15 in the final quarter, and finished with a 14 point margin, did not even finish the game with the largest fourth quarter points margin against the Jazz so far this season.

Utah has been in almost every one of their games this season, but they sport the worst offense in the league. Scoring isn't coming easy for the team and there are a few reasons why. The team is using green players in more important roles this year, which is a steep learning curve if you have never been used in these roles before. Secondly, there have been a ton of injuries which have weakened the bench. And arguably the most important factor, the team has been playing with significantly poor point guard play. All three of those factors come together in the case of Trey Burke, a rookie pg who is injured. And he's our most marketable player this year! (Because marking = points right? Nope. Anyway...)

Here we see how the Jazz score by quarter, for all the regular season games they have played this season (n=10).

There are a lot of numbers there, but the important thing to recognize is that the team is better in the second half than the first; and that the team starts and finishes games better than they play the second and third quarters. Of course, let's try to understand this a little better. In the first and fourth quarter Tyrone Corbin is playing mostly his starters. In the second and third quarters it's a mix with our bench players. All along many people pointed to our bench (particularly early this season when so many people were injured) as a weakness. The numbers support that theory. Furthermore, losing ground in the 2nd and 3rd usually mean the game can be out of reach even before the 4th quarter starts. Not on the table above, but in my spread sheet, we see that the Jazz are a net -107 points on the season after three quarter, which is, duh, losing by 10.7 points per game, on average. It's the excessive garbage time which actually allows for the Jazz to 'catch up' a bit in the 4th quarter and nearly break even (233 points for, 239 points against).

Anyway, the Jazz are having trouble scoring this year. The Jazz weren't great last year either, but still managed to score 98.0 ppg (13th in the NBA), and had a very impressive, but ultimately pace neutered, Offensive rating of 106.7 points per100 possessions (10th). This year's squad is managing only 88.8 ppg (30th). One thing both teams shared was that while their offenses were different, they both gave up more points than they scored.

How does this year's squad, which can't score, compare with last year's squad which apparently had one of the best offenses in the league? Well, last season I did a breakdown of how the Jazz scored by quarter after game 58 (thus, n = 58), and you can read all about it here. From that data I compared it to this season's data so far (n = 10). 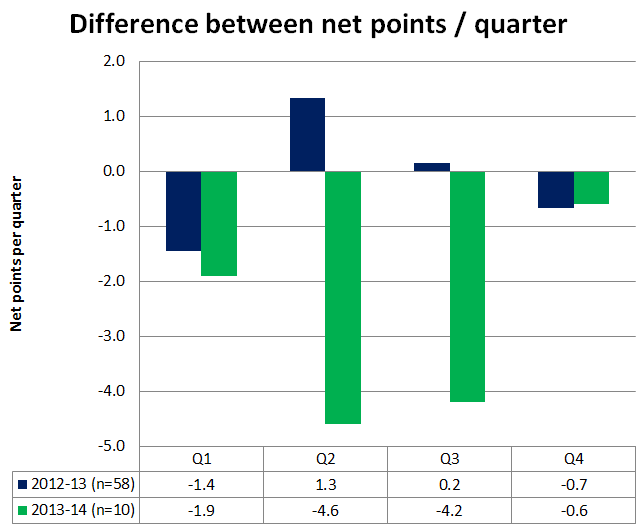 So the first quarter and last quarter aren't that different. Of course, our super awesome vets managed to score 0.5 points per game more than our horrible, green, unready young guys (who are still playing without Trey Burke) in the first quarter; but only to be out scored by our young team by 0.1 points in the final quarter. But the big difference here IS the bench.

Which is not hard to understand because last seasons' bench was so strong that the Jazz GAINED points back in the net equation during the second and third quarters last season. And that bench because most of this year's starters -- and as the first and fourth quarter numbers show, this year's starters aren't that bad off compared to last year's starters. It's precisely the lack of a bench that is killing the Jazz right now.

And to beat the dead horse, which is precisely what a lot of FANS said would happen. The bad record this season isn't because the guys who are promoted to biggest roles this year are bad -- the bad record is because no one was brought back to support them. Which is on the General Manager. This team is clearly built to test the abilities of the youth, while making sure that they maximize their lottery position down the line. We're not supposed to win a lot of games this year, and we're not going to.

But back on point, even our great offensive team was negative in net points per quarter for almost every quarter played. Last years team was built to maximize the offensive abilities around a mediocre pivot player in Al Jefferson. This year's team is built to play two way basketball. Of course, this year's team is a big work in progress.

On the net points scored / points surrendered level our starters this year are almost as good as the vet driven bunch of Al Jefferson, Paul Millsap, Marvin Williams, Randy Foye, and Mo Williams. We can assume that as the season progresses and our players get more comfortable in their new roles; more players return to the active roster from their injuries; and Trey Burke comes back that we'll probably be even better than we are right now.

Which is fine and dandy. Why? Well, because right now we can't get much worse. Which is all fine and dandy too, because that's precisely what the front office planned for this year.