The Jazz go 0-3 in their first week of regular season basketball.

Share All sharing options for: Utah Jazz Player of the Week: Week 1

John Lucas III made his highly anticipated debut this week, but failed to impress. I don't have super high expectations for Lucas, but if he is going to play 30+ mins then I expect 5+ assists. He's a point guard, 3.3 dimes in just under 33 mins is not going to cut it. He kept his turnovers low, finishing the week with just 2 miscues and a nice 4.7:1 ast/TO ratio. His shooting will need to improve, especially from the perimeter.

Gordon has gone from 3rd/4th/5th option (last season) on offense to 1st/2nd option (this season). That's a pretty big change. Thankfully his first week didn't go too bad. G led the team in assists, steals, 3P%, and was third in scoring and rebounding. Hayward nearly had a triple-double in Phoenix, finishing with 15 points, 10 rebounds, and 8 assists. If he can continue to grab 5+ boards and 5+ dimes every night...that would be fantastic. His shooting wasn't great, but I think most of us expected some sort of drop thanks to his new offensive role. Still though, it will need to improve as 37% from the field and 50% from the line are both unacceptable.

Richard Jefferson was another player to make his debut with the Jazz this week, and he outplayed my expectations. He didn't shoot too well vs the Suns (1-6 FG), but looked pretty good in the other two games (18 points 5 rebounds vs HOU). Richard also has shown he has some touch from deep, finishing second on the team in 3P% (2-5 from deep in both OKC and HOU games). Continuing to be a threat on the perimeter is going to be a big factor for him if he wants a spot in the rotation when Marv and Brandon get healthy.

Not a bad start for Favors. He led the team in rebounding (<--- get used to this), blocks, and FG%. Hopefully he can do that all year long. The biggest positive I saw from Favs was his passing, it looks much improved. He started off the season with a career high 5 dimes and had 4 in the next game. That is awesome. Unfortunately he also averaged 4 turnovers...not awesome, and something he'll need to watch all season long. Nearly 38 MPG, so weird.

Pretty good numbers for Enes. He averaged a double-double (had 2 on the week) and made all 8 of this FTs. Kanter's offensive rebounding has been outstanding. He had 10 O boards vs the Suns and is averaging 6 a game. If he can put a similar effort out on the D boards his numbers could blow up. Passing still looks to be a pretty big weakness for Enes, which doesn't surprise me. His turnover numbers weren't that bad, but he'll need to continue to watch them, especially the illegal screens.

Alec started the season with a bang, dropping 24 points on the Thunder to go along with 6 boards and 6 dimes. He followed that with two more 15 point games. In cased you hadn't guessed, Burks led the team in scoring this past week, something I believe will happen often. But could he really lead us in scoring this year? Maybe. If he can become a consistent threat from deep it might actually happen.

Not spectacular numbers from Jazz newbie Mike Harris, but he did play good in the opener finishing with 13 points (5-8 FG), 4 rebounds, 2 steals, and some pretty good D. He wasn't a major factor in the other games, and don't be surprised if that's the usual case, especially if when our team gets healthy.

Welcome to the NBA Rudy! No huge numbers from Gobert, but I did see a lot that I liked. His length alters soo much. He is going to block plenty of shots, but is going to alter even more. I'm really excited to see him develop defensively. Offensively, Rudy has away to go. He will score thanks to his size, but he has no offensive game and is proving to be turnover prone (4 TOs in 8 mins vs PHX). Can his defensive presence make up for his lack of offense? 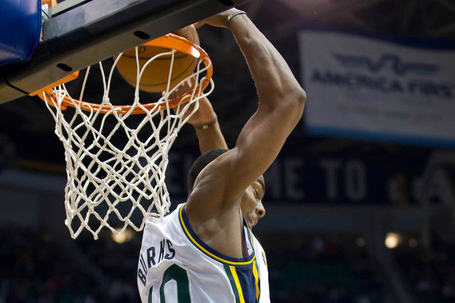