The Jazz finished their 15th week with yet another 2-2 record.

Share All sharing options for: Utah Jazz Player of the Week: Week 15

Another week of .500 basketball for the Jazz. Some fairly frustrating losses this week, we could of gone 4-0 and probably should have gone 3-1. Please, Gordon and Mo, GET WELL SOON!

It was a typical week for Jamaal. He shot 2/10 from the field and missed all 6 of this 3's (please stop :) ), but on the brighter side finished with 21 assists to 7 TOs. David Locke had an interesting stat he tweeted out today --- "As a starter Jamaal Tinsley is -47, when he comes off the bench the Jazz are +67 with Jamaal Tinsley on the floor." Is this just a product of the starters slow starts and the benches high energy, or does he have a major impact on these lineups? I like Jamaal as a play-maker, but as a non offensive threat it's likely harder on the team when he is playing with two post players, looking to kick it out.

Fairly rough week for Marvin. He shot 7-19 from the field and finished with just 2 assists to this 8 TOs. On the bright side he did shoot 6-9 from 3, it would be really nice if he could be a threat from deep. I took another glance at Marvin's Per36 numbers, and since he has joined Utah all of them have gone down (minus blocks). Is Marvin a good fit here? Is his defense worth his terribly quiet offense?

Paul Millsap is playing pretty good ball right now. He's not scoring a ton (still second on team though), but is shooting very well (having the best month of the season) and has been very active on defense (first in blocks, second in steals for the week) and even had the best +/- among starters. How important is Sap to this team right now? Locke again --- "The Jazz have only been outscored in 3 of the last 17 games with Paul Millsap on the floor". That's pretty dang impressive. The only cons to his game right now are his rebounding and turnover numbers.

*Paul Millsap's FG% has gone up every month this season. His rebounding has done the exact opposite.

Nice week from Big Al. He led the team in scoring, rebounding, and had the second highest FG%. He had one of best games of the season in the loss to Chicago, scoring 32 points on 15-22 shooting while grabbing 13 boards. He did have one bad game last week though, the first, where he shot just 7-17 (15 points) against the Kings. I know many don't like his style of play, but seeing him put the team on his back for that stretch vs the Bulls was awesome, and something we have only seen a few times since D-Will was traded away.

Really, really liked what I saw from Burks this past week. I'm not 100% certain, but I doubt Burks has gotten more minutes in any other 4 game stretch so far in his career. What did he do with the extended burn? Well he led the bench in scoring, shot 50% from the field and 66% from deep, and had the best +/- on the team...not bad. Oh and don't forget his energy either, especially on defense, it's been great. This is the Burks we all fell in love with when he showed those early flashes. He's had his moments, but his effort and patience are starting to pay off and it's fun to watch.

Alright week for DMC. His last game was his best, where he finished with 14 points, 6 rebounds, and 3 assists in a loss to the kings. Carroll doesn't have a load of offensive skills, but he does have his energy which is typically the cause of a few fast break and offensive rebound/put backs a game. He also finished the week with 6 assists and just one TO.

*DeMarre Carroll has made just 1 of his last 10 three point attempts.

Decent week for Favs. His shooting % went down a bit, and he only shot about 50% in one game (5-7 FG vs the Kings, the first time) but he's continued to rebound very well (second on the team), and like usual has been solid on D (second in blocks/steals). He was a little more TO prone this week, finishing with 8 (5 assists). His best game was against the Bucks, he finished with 9 points, 11 boards, 3 blocks, 3 steals, and 2 assists. We have been talking about Favors starting for a while now, and with the trade deadline approaching that could very well happen. Let's hope he's ready.

Great stuff from Enes the Menace last week. He played particularly well in the second Kings game (15 points, 6-10 FG) but had possibly the best game of his career against Milwaukee. Enes posted a stat line of 17 points (7-9 FG), 9 rebounds, 5 blocks, and 2 assists vs the Bucks, and did it all in just 15 minutes. That's crazy good. Want to hear something even crazier? Kanter is shooting is shooting 45% from 10 feet+ (threes excluded) this season, that happens to be better then both Jefferson (40%) and Millsap (35%).

Extremely hard decision this week, make sure to vote! 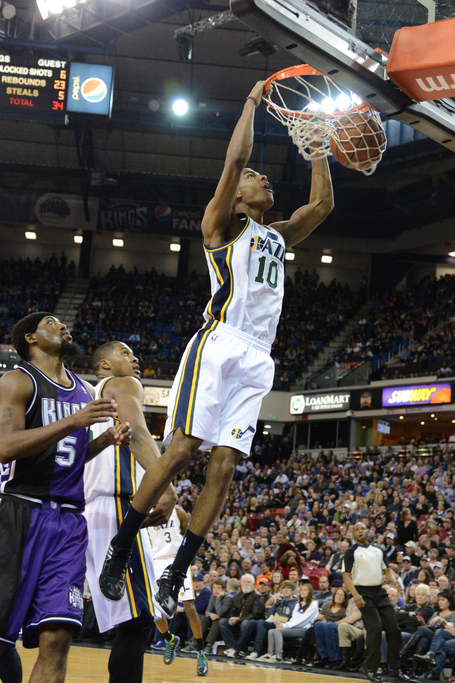