The Jazz finished their 16th week with a perfect 2-0 record.

Share All sharing options for: Utah Jazz Player of the Week: Week 16

Although they almost let one get away from them in Minnesota, the Utah Jazz headed into All Star break with some nice momentum. Utah won both their games last week, which included a home blowout over the scorching Thunder and a close, yet solid road win over them pesky Timberwolves. It's nice to see the team get some good Ws despite the absence of Mo Williams and Gordon Hayward.

Really not a bad week for Jamaal. His game against the Thunder was great. He had 6 dimes with just 1 TO, 4 steals, and while he finished with just 6 points, they came on 2 big three pointers. I give Tinsley a lot of crap for shooting those (and I honestly still don't think he should..) but he finished the week 3/4 from deep and deserves props for that.

To say Foye is struggling, well, that would be an understatement. Randy was 6-21 from the field (28.6%) last week and was just as bad from long range, making 3 of 11 attempts (27.3%). So when did this slump start? Ironically right after the 3PT Shootout contestants were announced. Yup, he's only made 6-21 from deep (28.6%) since Feb. 7th. Not only is Foye the best shooter on the team, it's his specialty, it's much harder for him to contribute if he isn't hitting his shots. I know this goes without saying, but the sooner he gets out of this slump, the better.

Let's just say it wasn't Marvin's week. He took just 5 shots, and unfortunately missed them all (0-3 3PT). His last few boxscores are about as empty as they can get. The one positive I found was 7 boards in 16 mins vs the Wolves, but that's it, the rest are pretty much 0's. Yesterday I tweeted out some stats about Marvin, and it started a few discussions, one being that while his offense has been absent his defense is still there, and it's actually pretty good. While I do agree with this, it makes me wonder where is Marvin's place on this team? If he can only contribute from the defensive end, does it make more sense to start him to defend top tier SF's, or would it be better for him to come off the bench in order to help bring some more wing/guard scoring into the starting lineup?

Paul was great last week. His game against OKC was huge, as he had a double-double of 18 and 10, not to mention a couple steals and a very impressive 6 dimes. Sap also had a nice game against the Wolves scoring 21 points while making it to the line 11x. Sap finished the week second in points, first (tied) in rebounding, third in assists, and even had the best +/- among the starters. Keep doing your thing Paul!

Al also had a very nice week. He led the team in points, rebounding (tied), steals, and played a big role in both of our wins. The Jazz big's are beating up their opponents lately, and Big Al is leading the attack. While Al wasn't a participant in this years All Star Weekend, that didn't keep him from staying busy over the break. Things like this are why I'll be sad if Al leaves the Jazz. He's far from the perfect basketball player, but you really can't question his heart.

Decent week for Earl. He led the team in assists, and rebounded pretty well. Hewas also 5-10 from the field, which is great for him. One thing Watson definitely needs to work on are the TOs, his 3.5 a game turn out to be 5.7 per 36, which isn't very good. I think Earl can tend to be a little reckless with some of his passing and it almost cost us a win in Minnesota. Love you Earl, but be careful!

For the third straight week, I'm impressed with the effort/play of Alec Burks. Not only did he shoot well (10/20 FG), he also happened to be third on the team in rebounding (yes, third!) and was second on the team in assists. Both his passing and rebounding were some of Alec's underrated skills coming out of college, so it's cool to see them in his NBA game. Oh, and don't forget him saving our asses in Minny. Burks wasn't perfect last week though, as he shot 25% from deep (1/4) averaged 4.5 TOs on the week. I don't think the turnovers are something to get too worried about though, as he averages just 1.1 on the season (2.4 per 36)...however if the problem does persist it could lose him some burn.

Rebound, score, hustle...repeat. That seems to be the story of DeMarre Carroll lately and I have zero complaints about it. While the hustle and effort has always been there for Carroll, the offense hasn't. Lately, that's changed. He led the bench in scoring last week and has scored in double figures in 7 of his last 8 games (and is shooting 56% in those games). While I wouldn't saying he is a talented scorer, he is finding way to get buckets and is doing it efficiently. Good work DeMarre!

Not a ton to say about Favs this week. He didn't have any big numbers, but his play was still pretty good. He was a big key to the OKC win (15 points, 5-5 FT) and wasn't bad against the Wolves either (3-6 FG, 6 boards, 2 blocks). I know this is obvious, but I wish he was getting more minutes.

Player of the Week: Week 16 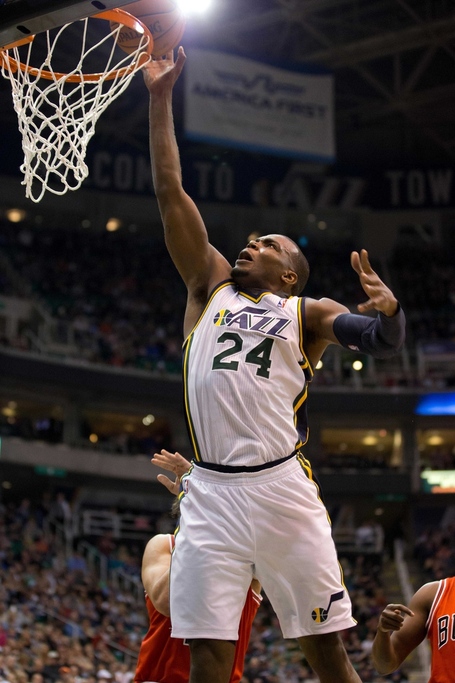