Share All sharing options for: Utah Jazz Player of the Week: Week 17

Last week kind of went as expected for the Jazz. They beat a (then) spiraling Warriors team at home, but followed that by getting blown out on the road to a very good Clippers team. If anything, it was a good reminder that we're in the middle of the pack right now, and probably will need to turn it up a notch to make the playoffs.

For the the third straight week Tinsley's mins have dropped, and it's not hard to see why. He remains to be an offensive liability, and has almost stopped shooting completely (1/4 FG last week, all 3's...8 of his last 9 FGA are 3's) and also had the worst +/- on the team last week. He did some good though, like finishing the week with 8 assists, 3 steals, and 0 turnovers. I love ya Jamaal, but I sure do miss me some Mo Williams.

And the slump continues on. Randy actually had a decent game against GS (15 points, 4/9 FG, 3/6 3PT) but followed that up with a 0 point, 0/5 FG (all 3's) performance against the Clips. Just off the top of my head, I think this is Foye's third slump of the season, and it might be the longest. The Jazz will really need him to heat up for the playoff push.

Paul continued to play well last week. He nearly shot 60% from the field (led the team in FG%), and is slowly inching closer to 50% on the season (49.1%). The rebounds are low thanks to him collecting just 2 in the Clippers game (had 9 vs GS). Millsap is simply playing good basketball right now. He absolutely torched Griffin to start the Clippers game and really has been efficient all month long.

Not a bad week for Big Al. He led the team (tied) in scoring and tied for blocks. It was a little weird to see him with more TOs then assists. He played great against GS, finishing with 24 points on 11-18 shooting but wasn't as impressive in LA as he put up just 16 points on 19 shot attempts. Rebounds are definitely a bit low, and could be something to watch as they've gone down each month this season.

Earl had another bad week of shooting (finished 1/6..didn't shoot vs GS), but was great in a lot of other areas. He led the team in both assists (finished the week with 13, and only 2 turns) and steals, and had the second best +/- while continuing to play with good energy (both ends of the floor). I wonder how long he'll retain his new starting job.

Still loving the play of Burks. I love how fearless he is playing right now. He isn't playing scared to attack, and took right at Griffin a few times. He shot great in both games, and was 3/5 from downtown on the week (60%). He really has been rebounding well lately, his 5.5 average actually extends back to the past 6 games (5.4 actually, but still.) I don't think he's our PG of the future, but he's continued to show flashes of play-making.

Welcome back Gordon! Hayward returned from a shoulder injury (missed 10 games) and appears to be right where he left off. He scored 17 in his first game back on 5-9 shooting, then followed that with 23 points against the Clippers while setting a career high in Free Throws made (13) and attempted (14) and even had a season high 8 rebounds. His overall shooting is still a bit low, but he has been making the difference by getting to the line. It's also nice to see him finish the week with just 2 TOs (7 assists), something he has struggled with a times when this aggressive. Just a very nice week overall for Gordo, he was first in points (tied), second in rebounds (tied), third in assists, oh and even had the best overall +/-.

Another week of limited time, but still solid ball for Derrick. He scored 14 against GS (6-6 FT's) and had 7 points (3-6 FG) with 8 boards vs the Clippers. Once again, he led the team in rebounding off the bench...he is a fantastic rebounder when he plays actively (which he's been doing) and could very well be the best on the team. He led the team in blocks (tied) and has continued to play good, physical defense. The turnovers are a definitely a bit high for the minutes.

Interesting week for Enes. It started off rough, as scored just 1 points on 0-4 shooting vs GS, but had an excellent rebound game vs the Clips putting up 15 points on 6-7 shooting (3-3 FT). His whole month of February has been pretty roller coaster like actually, and includes 3 games of 0% shooting and 3 games of 60% (or better). While better consistency would be nice, the ups and downs don't surprise me considering his age and minutes.

Player of the Week: Week 17 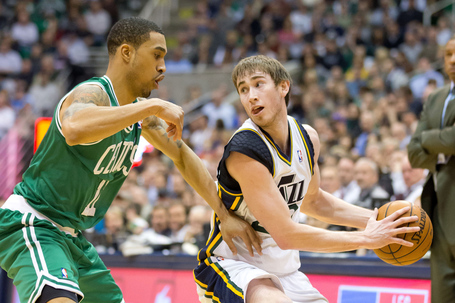