The Jazz went 2-2 last week, but it was far from satisfactory. The Houston loss was historically horrible (largest home loss, EVER), the Hornets win was nice but not dominant (as is should have been), and then we split the home/home with the Blazers (we were in position to win both..). The Jazz aren't playing terrible, but we have to get better. Hayward being out is obviously not helping but shouldn't be using it as an excuse.

Not a great week for "Streetball Jamaal". The scoring is obviously still not there, but what's really bad is that our starting PG who can't shoot averaged just 2.8 assists last week. I don't want to sit here and harp on Tinsley (especially since I think he is typically a great play maker) but having the worst +/- on the team and shooting 28.5% from deep doesn't help much either.

Randy finally cooled down last week. His FG% and 3PT% both finished the week at 36.4%, bad for FG, average for 3PT. Foye really only had one good game last week, coming in a loss to the Blazers (23 points, 6-12 3PT). I feel like he may be forcing it a little too much lately (13.8 shots per game), but maybe that's just what happens when you play a shooter big minutes? On the bright side, Foye finished the week second in assists, which included a game of 8 against the Hornets.

No big or amazing stats, but really not a bad week for Marvin. Minus his 2-10 performance against the Hornets he shot pretty well (56%), and grabbed nearly 6 rebounds a game, which is great. He played really well in the second game against the Blazers. It just seems like his overall energy is up a little, making a few more plays than usual. Then again, there are still times I forget he is on the floor. Good play overall, lets hope for an even better next week!

Millsap played poorly in the big loss to Houston (4 points, 2-9 FG), but ended up having another solid week (20-40 FG next 3 games). He took rookie Anthony Davis to school, dropping 25 points on him (11-16 FT) and finished the Portland games with 15 and 18 points. I've really liked what I've seen from Millsap lately, and if you haven't already make sure you check out this piece by Peter Novak (and Clark) on why Millsap is still our starting power forward.

It was a down week for Big Al. Like Paul, he played well against the Hornets (22 points, 10-18 FG) but wasn't able to find his shot in the other three games (42.8 FG%). While I do feel like the ball stuck in the post a little more this week, 3 assists is good for a center, especially with less than 1 turnover a game. One thing we do have to realize is when the ball is sticking in the post and stalling the offense --- it isn't always on Al. Players need to be cutting, screening, and getting open to help the offense flow. As a post player myself (churchball legend...maybe) I can tell you there is nothing more frustrating then getting the ball in the post just to have everyone stand around and watch you. Here's to better ball movement overall next week.

Minus the injury (he missed the final Blazers game), nice week from Watson. Earl only made one shot all week, but only took 4, that's a good thing to hear as he's shooting 30% on the season. His energy continues to be terrific, which his rebound numbers will back up. Despite playing under 20 minutes a game, Earl led the team in assists and finished the week with 13 to just 3 turnovers. Oh, he was also the only Jazz man with a positive +/-.

The good news: Burks is still in the rotation and is getting minutes. The bad news: Alec Burks really struggled with his shooting last week (5-18 FG). Let me point out that I feel like Burks seems to much more engaged lately, on both sides of the ball. He's young, he's got a lot of learning to do, but he's definitely been trying of late, and I can appreciate that. Burk's best skill is attacking the hoop and the getting to the line. The more I've specifically watched him lately, the more I thought he's been LESS aggressive, so I looked into some numbers. Turns out I was sorta right. Last year Burks took 36.4% of his shots at the rim (made 61% of them). So far this season he's taken 31.7% of his shots at the rim (while making 51% of them). What about getting to the FT line? His attempts have gone down from 5.5 to 5.1 per 36 minutes. So yes, Burks is attacking less this year, but not to the degree I was thinking. So why is he doing less of what he does best? It could be his confidence, it could be that defenses have scouted him better, but it's most likely caused by many different things. I don't know why, but I have a gut feeling Burks finishes the season strong (you heard it hear first!)..

Quiet start, but nice finish to the week for DMC. Not only does "The Junkyard dog" know and like his role on this team, he's doing it very well lately. Carroll led the team in FG% this week, and is shooting 48.7% on the season (that's 11.3% UP from last year). He played particularly well vs the Blazers, scoring 24 points in the two matches on 10-13 shooting.

More good play from Favs last week. He still obviously isn't getting big minutes, but he's been playing very well in the time he's gotten. Derrick led the team in rebounding last week...while coming off the bench...and playing 7-10 less minutes then Paul and Al. He also led the bench in scoring, but my favorite stat? He finished all 4 games with at least one assist.

Player of the Week: Week 14 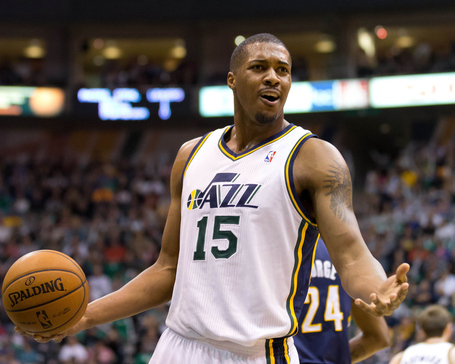