Utah Jazz Statistics - A surprising development in who shoots on our team, and how well!

Share All sharing options for: Utah Jazz Statistics - A surprising development in who shoots on our team, and how well!

Who shoots the most? Who is the best at shooting? Will the results here be a surprise? Without further preamble, we see that the people who shoot for us are broken down into a few thresholds:

It makes sense to run a structured (or tiered) offense. And when planning an offense not everyone is going to get to shoot the ball the same number of times a game. Part of that is game plan, part of that is talent, and another part is what does the defense give you. There are a lot of factors here, but there are distinct groupings by FGA. Big Al stands alone on the top of the heap, with four other players close by. The shots available taper off after those first have had their fill. 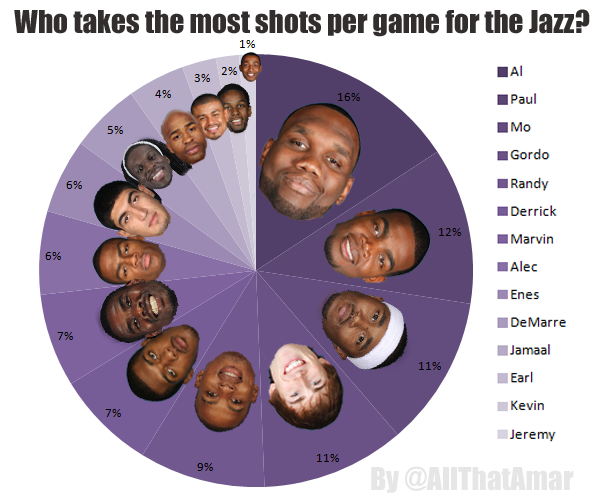 Yeah, four guys (Al, Paul, Mo, and Gordon) actually take half the shots we take in any given game. If you add Randy there (our fifth most frequent shooter, and this effectively makes a starting unit of sorts) then that's 59% of the shots taking by the top five guys. As an aside, it's funny to try to link the facial expressions of certain players with how happy or sad they are with this shot distribution.

So now we know who is shooting the ball the most. (Big surprise there) Let's look at who is doing the most with their shots. For this metric I fell back upon my simple love of Points per Shot (PPS). It's not as robust as Points per Possession (PPP), but if I used that I'd have to include a third factor here -- shots per possession. I'm trying to keep it apples to apples here because some detractors of our work feel like (among our many faults) we lead the reader in some direction. Well, I'm keeping it simple here, and not weaving some grand conspiratorial web of lies. Let's see how well people shot (on the x-axis) and compared it to how frequently they shot (FGA per game on the y-axis). 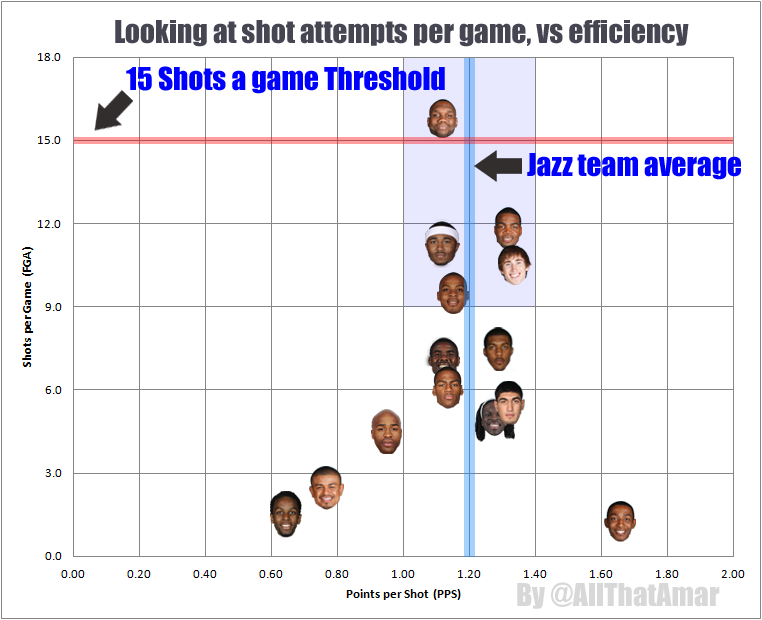 This is really where those groupings come into play. The people taking less than 3 shots don't really matter. And up at the top we have Big Al. In between you have one tight grouping between 6 and 9 shots per game, and another from 9 to 15 shots a game. In both cases you have some guys better than Jazz cumulative team average in PPS (6296 total points this season off of 5252 total FGA).

All of this appears normal to me. Of our core shooting group of 5 (Al, Paul, Mo, Gordon, Randy), only two of them are shooting above average in efficiency. While it is true -- giving more shots to people who don't do enough with it can be bad, we also need to see if their efficiency wouldn't increase with fewer shots. And, yes, some of our high efficiency guys may end up becoming LESS efficient with more shots as well.

That said there are two outliers here. Sure, not technically outliers in terms of mathematics or statistics, but in terms of game play. They are Gordon and DeMarre. These guys are the only non-bigmen to be on the positive side of the PPS wall. And these are guys who take three pointers and a number of jumpshots. They make up for the degree of difficulty in a number of their shots by a) having a diversified offensive game (it's not just one zone where they shoot from), and b) getting to the line.

Getting to the line makes life easier for a team, and helps you look better in PPS. But it's not just a trick or exploit, it's a real thing that good players do. And getting to the line makes scoring EASIER for the rest of your team too because the defense has to collectively play increasingly more timidly as the quarter goes on. Getting to the line is DPS that also BUFFS your party. It should be championed. Gordon and DeMarre are efficient wings, they should probably also be our STARTING wings -- but whatever, that's what Corbin did last year during our playoff push and it worked.

So what's the big surprise here? This is stuff I already know! The big surprise is that a high volume of our shots are being taken by players who are below average in PPS. Not just PPS for the Jazz (1.20) but even worse looking against the last 30 years of the NBA (1.21). We survive based upon our offense over our defense. We're only going to become a more deadly team if we get better defensive while maintaining this level of offense; or we need to get more efficient on offense, period.

A large part of that revolves around the shot distribution for sure. I think that some of our top shooters are not shooting the ball from their optimum scoring zones (two in particular would be Al Jefferson and Marvin Williams -- I've also previously detailed where they should be shooting from and how they should in fact get MORE shots overall). Getting smarter on offense leads to a better offense. The other problem is that the defense more than anythings wants us to take bad shots -- and this can be letting our top shooting players shoot from where they should not. The lane of least resistance here is killing us.

Wait, that's the surprise? Most of our shots are taken by a few guys, and the defense makes them shoot it from where they should not? Well, yeah. Surprise! We're not that good on offense and the numbers point to a few reasons why. I guess if our offense isn't as great as we are led to believe, perhaps we're not going to miss so much if we shake things up to try to be a defense first club? I don't know. I would love to have the team try it out so we can have data to pick apart in that situation as well. This isn't rocket surgery, this is basketball. Shut up!

More seriously though, thanks for all visiting this amateur blog. It's so fun to connect with so many Utah Jazz fans on a daily basis, and it looks like you guys like coming here too. So in recognition of this I decided to go old school and bring out the dreaded pie charts for one more post. While the people who post here may not be professionals, we're using actual data -- in fact taken from the very same webpages that the professionals get their data from. It's not perfect, but hey, feel free to join in the discussion to help advance fan knowledge. That's what we try to do here!