NBA History: Looking at every single New Orleans / Utah Jazz player to average 15 or more shots a game, and how well they scored

Share All sharing options for: NBA History: Looking at every single New Orleans / Utah Jazz player to average 15 or more shots a game, and how well they scored

A while ago I looked at shot attempts (FGA per game) and scoring efficiency (as a product of points per shot, PPS) for our Utah Jazz. (Full article here) What we saw was that our team's top shooters in frequency were not necessarily the same group of players who were the most efficient scorers. Only one player on the Jazz shot more than 15 shot attempts a game, Al Jefferson. He's our first option so he has to shoot the most. And if you shoot the most you have a chance to actually become less efficient. It's a risk you take by shooting a lot and having a larger sample size of shots.

Some felt I was unfair to Big Al, and as our only guy who can ever possibly score, we need to live with that and go easy on him. After all, he's only making $15 million dollars this year. So, I looked at every other single Jazz player in franchise history (from 1974 till now) who has averaged at least 15.0 shot attempts (FGA) per game for an entire season. This group was (thankfully) 50 people large, and significant in size. The averages for this group was 71 games per season, 24.2 ppg, 18.4 fga, and 1.32 pps. Let's take a look at where Big Al stands. 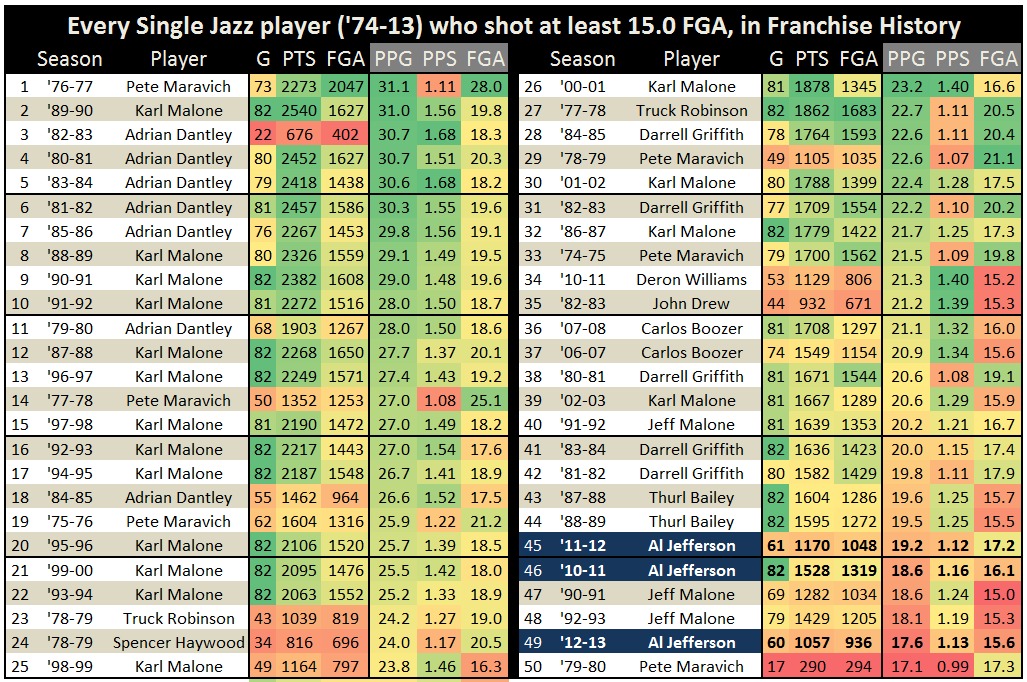 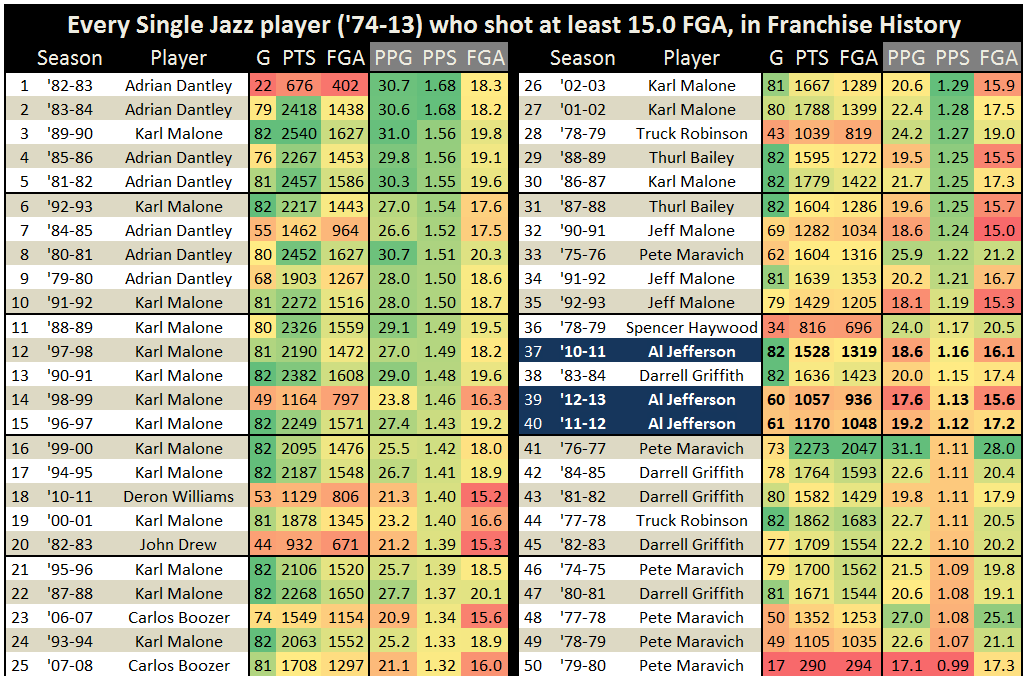 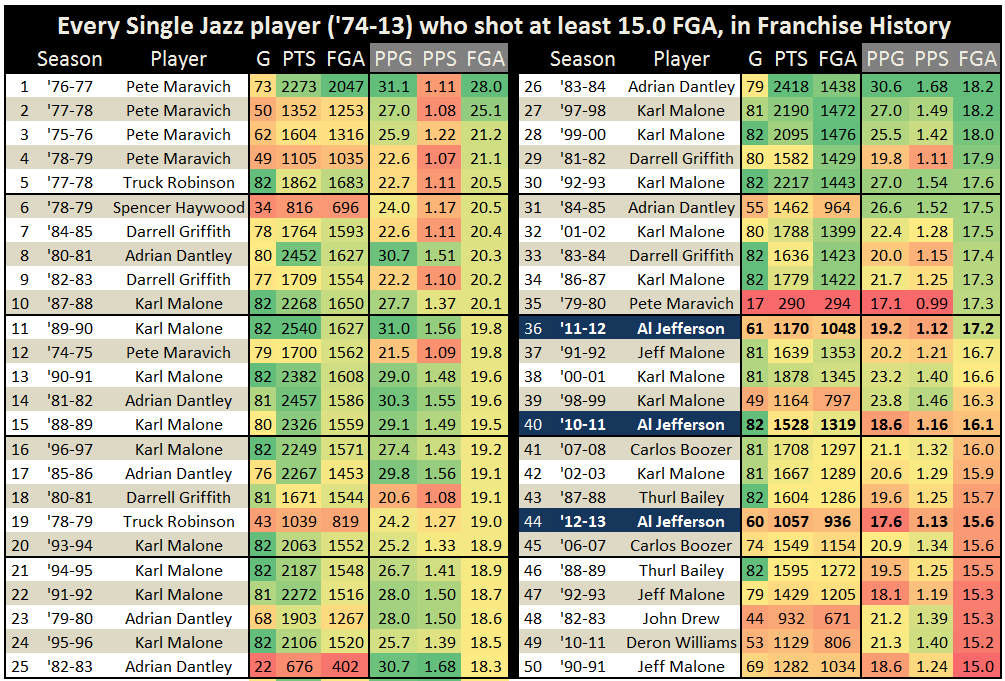 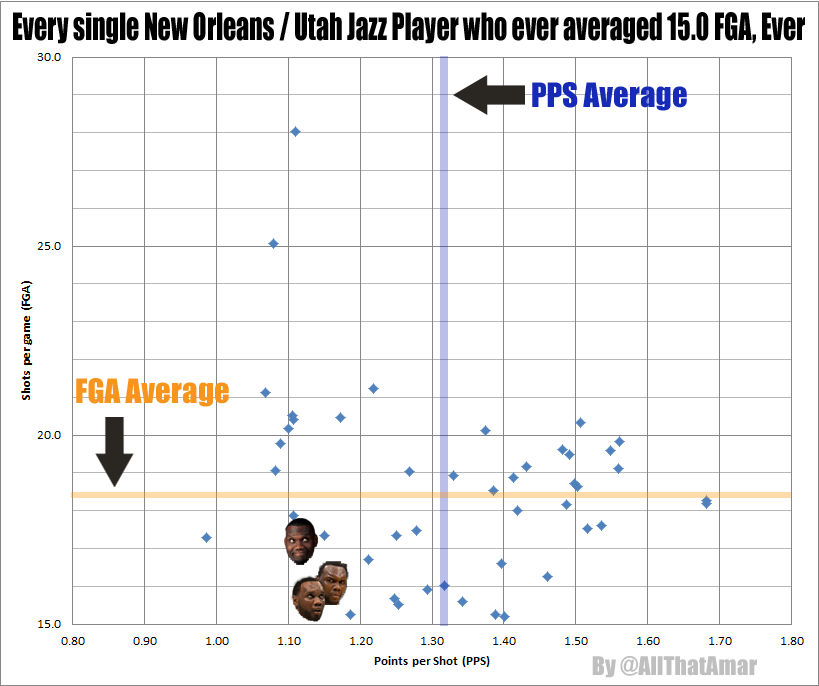 Welp indeed. Compared to every other guy who shot 15 shots a game, including some 2nd and 3rd options, Al isn't really doing it. Even in his low shot group only two guys are less efficient (Griffith and Maravich in their less than stellar years). It's just who he is. I'm not dissing him, I'm just showing facts. If facts hurt your feelings, then that's on you. Every one of these guys, besides Al, was also an All-Star at some time during their lives -- except for Griffith (who was NCAA player of the year and NBA Rookie of the Year). So I think there is evidence to support the theory that Jefferson isn't so hot, and not in the class of the rest of the guys who have shot 15 or more shots a game. Going forward I don't know if he should be shown the money in the off-season. Of course, I will contend that he would be the best 2nd option we've ever had. It's just hard to find that first option to supplant him when the entire offense and off-season moves appear to only entrench him into a role he is ill suited for, by direct comparison to his peers.