NBA Scoreboard: Are the Jazz getting blown out more than normal this season?

Share All sharing options for: NBA Scoreboard: Are the Jazz getting blown out more than normal this season?

Okay, last night the Utah Jazz lost to the Oklahoma City Thunder. It was bad. We've had a few bad losses this season, and this season isn't over yet. Some of us are still smarting at the 45 point drubbing the Houston Rockets gave us. As fans you feel bad when you lose, but you feel really bad when your team gives up the ghost like this. Worse still, these bad losses 'appear' to be happening a) much more frequently than before, and b) happening much more often these last few months. We love our team, and I still go around wearing my retro Jazz beanie out here in Detroit -- proudly after blowouts. But there is a negative consequence here. The team looks bad. The players (well, the ones that matter) should feel really bad about it too.

Are the Jazz losing more in blowouts this year than normally? Are the players tuning out, as evidenced by worse play down the stretch? Let's look into it. 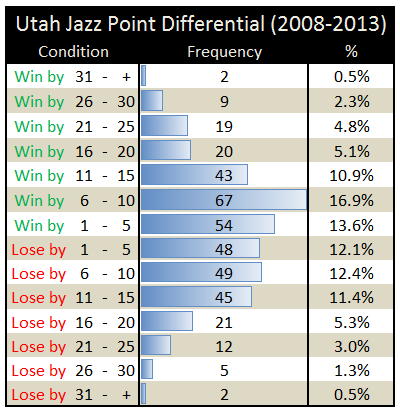 First of all, this is a great distribution. There are some blowouts, and very few really awesome wins, and really horrific losses. The majority of the games are within + or - 10 points. (Which makes sense) Over this time period of '08 onwards we skew towards winning more than losing. As an aside, over this period we average 101.1 ppg, and we give up 100.2 ppg.

This is what I'm going to base 'normal' off of. I'm not going to go back and do the last 37 or whatever years in Jazz history for EVERY post I do. 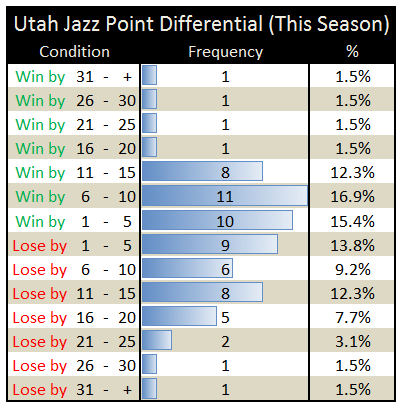 Okay, we skew towards winning here as well, but there is a secondary 'hump' of us losing at least by 11 points. However, if you are Rain Man and you memorized the percentage breakdowns from the previous table you will see that there's some very bad news here.

The critical issue here isn't "well, we usually win 17% of our games by at least 6 points, and we're doing the same thing this year." Without throwing even more numbers at you let's collect these games into blowout games. To make thinks easy on me, I'm defining a blowout as a game where the final margin is 16 points of more.

If you care, blowouts comprise 23% of all of our games during the larger sample size of 396 games, so roughly a quarter of them. They are only 20% of the game this season, so about a fifth. So the number of games we are in that are blowout games are actually less than 'normal', right now. Of course, that's not the critical issue here. The critical issue is the breakdown of blowing the other team other vs. being blown out. The perception here is that we're getting blown out more than normal (That was point a) all the way back up at the beginning of this post). Let's take a look:

Welp. The numbers don't even tell how bad it is, because the shift from being +2.5% down to -7.7% is a 10.2% change. If you just look at the numbers were were +10 in blowouts over 400 games. In 65 games this year we're already -5. If we keep up that rate (* assuming a larger sample size does not change the rate of these blowouts) we'd be -30 in blowout disparity over the larger number of games. (We're +10, so -30 is a lower number than +10) Of course, we hope a larger sample size would indicate that the team we see right now is now really how good or bad our team actually is. We can debate that point, though.

I think we can say that Point A (from up above) appears to be confirmed with the data. Compared to what is "normal", we are getting blown out more frequently.

Are we losing worse, now than earlier in the season?

I guess this is the simple way of explaining Point B (from up above). A trip down memory lane (aka, Games 1 through to 65 this season) is immediately disheartening because of all the losses we have right now. How do we find out if we are losing *more* than we were before? I guess you need to be a very passionate fan to find this stuff out . . . but . . .

This is the breakdown of our final margins for each game we've played, broken down by 10 Game Splits. 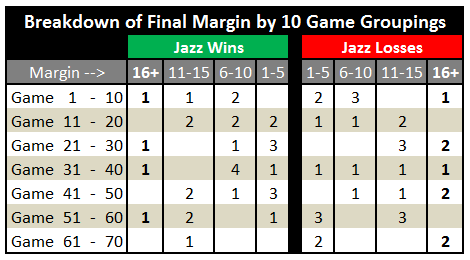 Okay, what this tells you, if you are a normal human being, is nothing. Let's look at it in graph form, and isolate it just for the blowout games (which were previously defined as games with a final margin of 16 or more points). 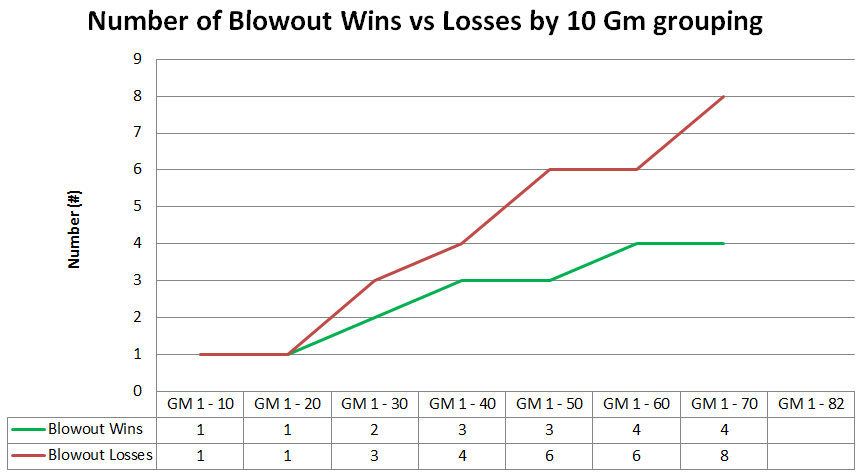 This 10 game split isn't even over yet (it's half over), and it looks like the slope of the red line is on an upswing. Regardless of its' slope, the red line is growing at a quicker rate than the green line. So, Point A is confirmed again here; even if we don't have conclusive information on Point B. Of course, maybe the information for Point B (that we're suffering through more bad losses than early on in the season) is conclusive enough. I don't know, I'd have to wait till the end of this month to know more. (N.B. There were 9 blowout losses listed in a previous section and only 8 here. The difference is actually the difference between one point in the final margin of one game, 15 point margin or 16 point margin. Really this also doesn't matter much I guess. I guess you could argue that a 15 point margin is also a blowout. Double meh.)

So, are we getting blown out more this year than previous years? Yes.

Are we getting blown out more lately than consistently over the entire season? I'd also say yes.

Why is this happening?

Well, first of all, sample size matters. Maybe if this team played 400 games we'd have a very similar distribution to the actual 396 data set. Secondly, our team over the entire 2008-2013 time period isn't one single team. We've had two coaches (Jerry Sloan and Tyrone Corbin). We've had a number of primary players come and go, or be traded for (Deron Williams, Carlos Boozer, Al Jefferson, Paul Millsap, Mo Williams, Mehmet Okur, Andrei Kirilenko). We've had a number of good teams, and some bad ones. We've missed the playoffs and made the playoffs. The general point here is that the team is not homogenous. And the concentrated view of our team right now, this season, could be just looking at the one little part of the loaf of bread that has mold -- while the on the whole the entire loaf is still good to eat.

I have concerns over who is telling what to Corbin. When he was promoted, and then had the interim tag taken out immediately, and then extended -- all of the indications we have had were that Corbin was the guy, and he did not have to look over his shoulder. The front office, ownership, Gail, everyone had his back. And that he would receive the type of unconditional support that Jerry did over the years. The way he is behaving, especially with the media lately, gives me the indication that either something changed, or that perhaps we were mislead about just how secure his job was.

As a result, I feel bad for Corbin. If he was promoted to be here for a while -- no matter how we do -- then he shouldn't be under all this pressure to win all of the time. I can't shake the feeling, however, that he was promoted to be a fall guy for the team. The front office wanted to promote Phil Johnson, but his loyalty to Jerry made that an impossibility. Corbin was the next in line, paid his dues; but was not the Coach of the future. Maybe this is why they came out and made him out to look like that, while keeping him under harsher internal review? I don't know. I'm trying to make sense of the conflicting overt gestures of the front office with the scrambling style of a very frantic Corbin right now. He seems like a guy who is losing control of the team, a team built for the short term with a lot of expiring contracts. Mercenaries aren't known for their loyalty. Time will tell how we finish this season.