NBA Statistics: Where have all the Utah Jazz rebounds gone?

Share All sharing options for: NBA Statistics: Where have all the Utah Jazz rebounds gone?

Certain teams retain a quality to them, even as the years come and go. Coaches are shuffled, players are drafted, others leave in free agency; however, some qualities endure. In some cases they are positive stereotypes, yet in other cases they are negative labels. The Boston Celtics are known for playing tough defense, and the refs let them do it. The Golden State Warriors are known for being a shoot first, ask questions later team -- and they always seem to be a high powered offense. For our Utah Jazz there are a number of traits we seem to have. We're supposedly a defensive club, but that is clearly not the case anymore. We used to never take three pointers, and for the longest time that has been the case. We're proficient in the long ball this season though. Another quality of the Jazz was that we were great rebounders. We were tough. Gritty. And played with a lunch pail mentality.

At times during the last two seasons it was as if our offense relied on getting offensive rebounds. So, surely, we are STILL a strong rebounding club. Right? Well, in efforts to remove any doubt, ignorance, or short term memory -- let's test this against the last 20, 10, and 5 season in Jazz history.

TOO MANY NUMBERS! HORRIBLE, HORRIBLE Numbers!

Just get the full screen size so you don't squint too much...

I think you can point to all the times we were #5 in something (the green cells) as say, with puffed out chest, "yes, we owned the glass." Last season we owned the offensive glass, but we've been told that this is a new thing. In fact, we used to dominate the offensive glass since the 2000-2001 season. (So, boo to you short term memories) We used to get a lot of our shots back during the Halcyon days of Deron Williams and Carlos Boozer. And we had a stellar offense back then too, we MADE a lot of shots then. We're not really doing the same thing now. (The OREB% validates this -- it was way more green during 2001-2006 than it is now)

Well, okay, the offensive rebounding is supposed to be awesome, but now we see that it's been better before. What about just rebounding . . . in general?

Well, our TRB differential isn't so hot either. It's not as bad as it was 2 seasons ago, but it's not like we're *killing* it. 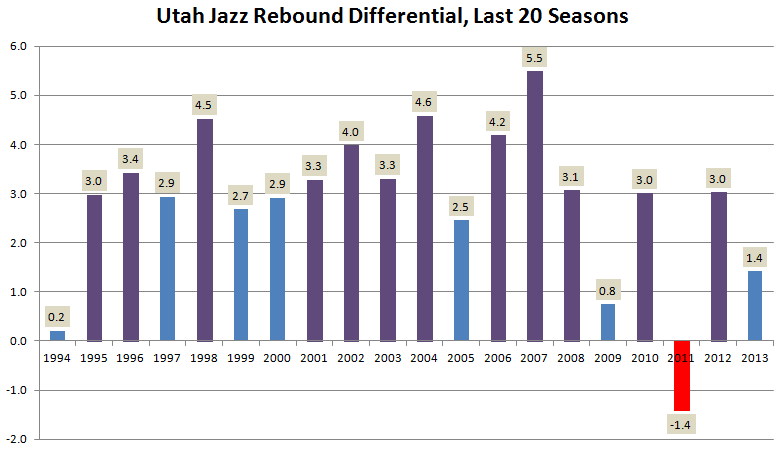 Yes, and this is commiserate with our TRB% as well. 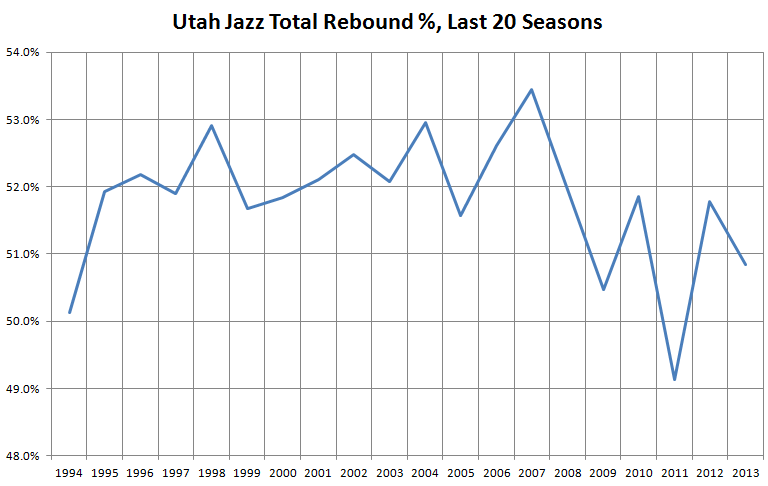 So, we're not as good at rebounding as we used to be -- despite getting MORE OREB and DREB per game now. The reason for that may be tied to FG% and pace.

I thought that our rebounding would be AWESOME this year with Al Jefferson, Paul Millsap, Derrick Favors, and Enes Kanter. They are all individually stellar rebounders. Jefferson is 'a true center' (Ty: whatever that mean) and more than holds his own. Millsap has always dominated on the glass, from NCAA to the NBA. Favors is super athletic and strong. Enes Kanter is the glass eating Avatar of the God of Rebounds.

So where's the problem?

Our guards and wings. That's where the rebounds have gone. Guys like DeMarre Carroll gets a lot of 50/50 balls, and Alec Burks is surprisingly effective on the offensive glass. But they can't do it alone. Guys like Mo Williams, Randy Foye, and even Gordon Hayward need to do more. They all play solid minutes, but haven't been doing their share on the glass. I guess that's where those previous Jazz teams excelled. You knew guys like Deron Williams, Andrei Kirilenko, Ronnie Brewer, Matt Harpring and company would take care of the glass. This partially explains why we brought in Travis Leslie.

It seems like our front office and I are noticing the same things -- and they're doing things about it now. This is a positive sign, and hopefully next year our rebounding can make a big rebound as well.