The Jazz finish their 18th week with a 1-2 record.

Share All sharing options for: Utah Jazz Player of the Week: Week 18

Disappointing week for the Jazz. They had 3 games at home and only came away with 1 win, which came against the Bobcats. The Hawks and Celtics both are good teams and played well, but considering we've beaten OKC/MIA/SAS all at home this year, we can't make any excuses. Utah needs to kick it up a notch.

Earl Watson was inserted into the starting lineup for the first time all season last week. His numbers definitely aren't that good, and if you take quick peak at the stats, he plays much better coming off the bench (better FG%, more assists, less TOs, etc.). However, Earl didn't get to start to put up numbers, but to help the team get off to better starts. Which he did, sorta. The Jazz starters were +1 to start the Boston game, and were +6 to start against the Bobcats, but were negative to start the second half in both of those games, and also both halves in the ATL game. So maybe it didn't work. Regardless, I don't think either him or Jamaal is going to make a difference we need. Thankfully we got Mo back.

Boy has Foye been cold lately. His slump carried on through last week as he shot 35.6% overall and 31.3% from deep (5/16). We need his shooting back.. I've wanted him to come off the bench for a while now, but if Corbin decides to make the change, the sooner the better. We need rotations/lineups set for the playoffs (assuming we make em').

It was nice to see Marvin break out of his funk against the Celtics, unfortunately it didn't last too long. He scored 15 points (5-10 FG, 2-2 3PT) vs Boston and played very aggressive. He followed that with a 8 point 4-10 FG performance against the Hawks and was 0-4 in the Bobcats win. Defense may be his strength right now, but we need Marvin's offense, having only 2 offensive threats in the starting lineup is a really bad thing. The good news is Mo Williams is back. Why is that good? Because Marvin plays much better with Mo as the starting PG. From David Locke "Marvin Williams prior to Mo Williams injury 10 pts per game - 46% FG and Jazz were +6 - since injury 6 pts per game - 35% FG and Jazz are -94". Can Mo really solve Marv's offensive woes? We might find out this week.

Favor's week was highlighted by his performance against the Hawks. He had a line of 17 points, 15 boards, 3 blocks, 3 dimes and shot 6-11 from the field (5-6FT). Lack of minutes kept Favs from putting up similar numbers in the Boston/Charlotte games, something that has partly been caused by a recent uptick in fouls. Derrick had 15 on the week, fouled out vs the Bobcats, and if you look back at the last 6 games he has 30. That's 5 a game and way too much. We saw this earlier in his career and he's actually been much improved in the area for the most part. One thing is clear, Favors can put up big numbers in big minutes, let's hope this is a temporary problem.

Al only played in the first two games (hurt his ankle vs ATL) this week but played well in both. He shot 6-11 in Boston and played even better in ATL (26 pts, 11 boards), but unfortunately so did the other Al (Horford) who finished the game with 34 and 15. Al led the team in points and rebounds but also had the worst +/- on the team. It will be interesting to see how the team continues to play without him.

After playing 4 straight weeks of great ball, Alec Burks had himself a down week. His shot simply wasn't falling as he was 9/27 from the field, 1/5 from deep, and 3/8 on freebies. Fortunately the effort and energy are still there. He continued to rebound well (4th best on team) and also had the highest +/-. It's been really fun watching Burks develop lately, even with weeks like this.

Good week for DMC. Carroll was quiet, yet solid in the first two games, then had a career night against the Bobcats scoring 19 on 7-10 shooting. I love what he brings to this team. His hustle and energy are a constant every night, and typically give us an extra possession or two. And now he's contributing on offense, and being pretty efficient at it (led the team in FG% for the week.) If you asked me when we first signed Carroll where he'd be in a year, I'd probably tell you the bench of some other team. Major props to you DeMarre.

Not a bad week for G. He's continued to play well since coming back from injury and had 26 points in Boston. While his FG% is a little low he still ended up with more points then FGA in all 3 games. Perhaps the most impressive part of his week was that he had 11 dimes and just 1 turnover.

Interesting week for Enes. He started off slow, shooting a combined 4-13 in the first two games (6 total boards), but then BLEW UP in the next. Kanter man handled Charlotte, dropping 23 points and 22 rebounds and was 10-12 from the field. Games like this, regardless of the opponent are exciting. He showed us exactly why he was the #3 pick. His offense game is really opening up and his jump shot is becoming a weapon. Can't believe this dude is only 20. 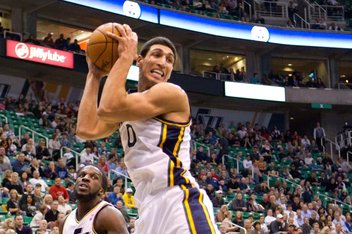