The Jazz finish their 19th week with an ugly 0-4 record.

Share All sharing options for: Utah Jazz Player of the Week: Week 19

Wow. Pretty rough week for the Jazz. They played 4 games on the road and came away with 4 losses. Fortunately, they didn't play terrible in 3 of 4 games, and really could of finished the road trip 3-1 if a few balls had bounced their way.

Mo Williams finally returned from injury, but wasn't exactly amazing. He didn't shoot that well, had a questionable shot selection, and didn't have the best AST/TO numbers. On the positive side, he is definitely pushing the tempo, he forces the opposition to play defense, and can actually keep up with other starting PGs. It's been a while since Mo has played, so he might have to shake off some dust. Regardless he already is an upgrade over Tins/Watson.

Another pretty cold week for Foye. He did have one 'good' game, where he shot 4 for 11 (3-6 3PT) in Cleveland but was 2-20 in the other 3 games. Randy has hardly been a factor lately, I'm pretty dang surprised he is still starting at this point.

Carroll had a nice start to his week, putting up 13 (5-8 FG) against the Bucks, but then got inserted into the starting lineup and saw both his minutes and production both fall. His role has gotten a little smaller lately, which is interesting as he is coming of a very solid February.

Not a bad week for Paul, minus missing the NY game due to injury. His best game was against the Bucks where he had 22 and 14 (8-12 FT) with 3 dimes and 3 steals. He finished the week second in points, rebounds, steals and was the only starter with a positive +/-.

Okay week for Al, who only played in the last two games thanks to injury. He was great in his return against the Bulls, where he put up 23 points (10-16 FG) 6 boards, 3 blocks, 3 dimes and did most of it against Noah. However his game against the Knicks wasn't nearly as nice, as he had just 7 points on 3 of 9 shooting. I know it's only one game, but we need Al to be consistent, especially if we want to make the playoffs.

Nice week for Burks. He shot well in all four games, including 9-10 from the FT line. His best scoring output was in Milwaukee where he had 19 points on 7-10 shooting, however he also finished that game with a career high in turnovers (6). I like Alec's potential as a part-time PG, but it wouldn't hurt for him to cut some of the lazy passes out of his game. Overall good stuff, Alec continues to have a very solid second half of the season.

Up and down week for G. He was fantastic in Cleveland, dropping 25 points (8-17 FG, 3-5 3PT) and 7 dimes with 3 steals, but couldn't find his shot the rest of the week (8-30 FG). Hayward has definitely struggled with his shot at times this year, and you have to wonder if that is due to him taking on a bigger load of the offense this season (FGA per 36 up 3.5 this season).

Ugly start, but strong finish for Marv's week. He was pretty much absent in the MIL/CLE games scoring 0 points on 0-7 shooting (4 rebounds), but was the exact opposite in the next two (CHI/NY) where he scored 21 points (9-16 FG) and brought in 17 rebounds. I love seeing Marvin make an impact on both ends of the floor. He has shown us he can help us, we just need some consistency.

Not a bad week for Favs. He has been an elite rim-protector lately, blocking 4 shots in Cleveland and 6 more in Chicago (led team in BPG). This has however, come at the cost of more fouls (13 in last 3 games). His rebounding has been great, as he led the team off the bench once again, including 15 boards in his big game (23 points, 11-20 FG) against the Bucks. I still think he is a question mark on offense. No doubt can he put up good numbers, but I don't feel he is ready to carry a team offensively, and seems to struggle at times when we lean on him.

Really impressive ball from Enes. He has been a monster off the bench and is showing some serious offense potential ---including his mid-range game, where he is a legit threat. His per 36 numbers are 21 pts, and 10 rbs, bringing back memories of Booz. He is coming off the bench and simply making a positive impact, I'm excited to see what he can do with more touches.

Player of the Week: Week 19 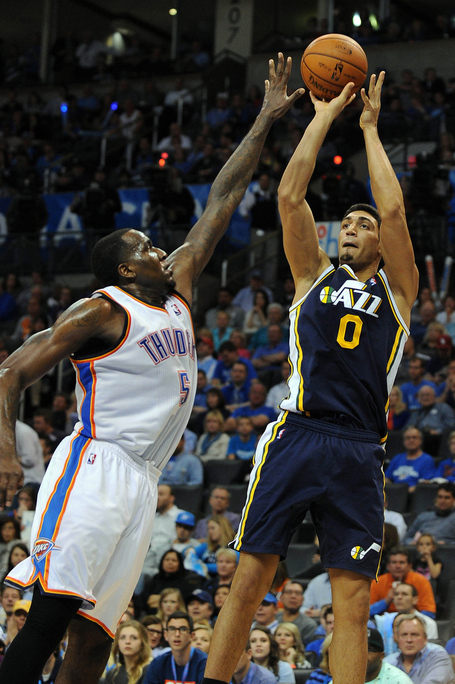