Jazz Randy Foye is not in a slump, he's just regressing back to the mean

Share All sharing options for: Jazz Randy Foye is not in a slump, he's just regressing back to the mean

The Utah Jazz are getting great value for Randy Foye who signed on for $2.5 million dollars and will be a free agent at the end of this season. Or, well, they were back when he was shooting 50% from downtown and helping us win games. I don't think he's doing that now. And we're not winning now. So does Randy go, do the Jazz go? I don't know. But what I do know is that it's wrong to say he's in a slump. He's not. He's just regressing back to the mean. Only silly people thought that a guy playing at the age of 29 would somehow have a historic increase in shooting efficiency. He was shooting great in the middle of the season, but he's just shooting what he has to shoot in order to get back to his career averages.

You can't make a tiger change its' stripes.

You can't make a shooting guard somehow drink a magic potion and shoot 15% higher than his career average for an entire season -- even in a contract year.

Here's a look at his work for our team month-by-month in terms of PPG, FG%, 3PT% and eFG%. (I picked eFG% over TS% because -- if you've ever looked at the formulas, only ONE of them even incorporates 3PTM, and it's not TS%) I've also included a little graph that shows his eFG% by month. 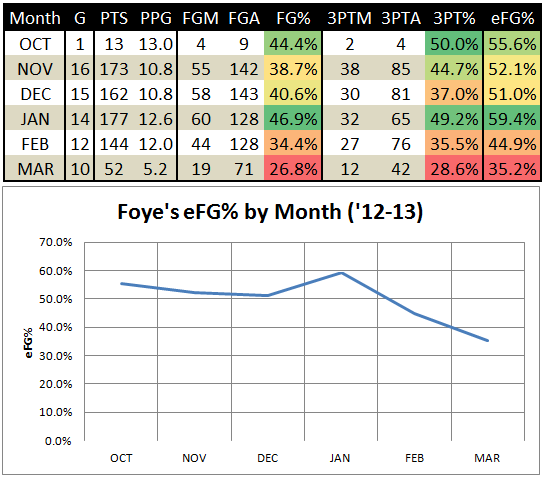 It has gone down for sure. But it's not like he's in a slump -- he's just now played in enough games to make this data set more representative of his actual abilities as a shooter.

If I did these numbers back in January they all would be much higher, but as this season continues, Randy will only continue to drop back to his averages. It's not me being a hater. It's just math.

If we wanted to be 'haters' we could look at his march fg% of 26.8 and wonder if that's too low for a starting shooting guard. Especially one whose main talent is shooting -- it's not like Randy is going out there locking people down, or creating for others. The only guard on the entire Jazz roster who averages fewer assists per 36 minutes is Kevin Murphy. He's last on the ENTIRE TEAM in rebounds per 36 minutes as well. He does shoot a lot though. So he's got that going for him.

When he's on the court the Jazz score 107 points in 100 possessions, but give up 111 points. The disparity of him being on vs off the court is a -8.6 points in 100 possessions according to 82games.com. Three point shooting specialist off the bench who can come in like Kyle Korver and knock down shots? Yes. Heck yes. Starting SG who is also responsible for playing defense, rebounding, and getting other guys involved? Nope. Give me Gordon Hayward or Alec Burks instead.

But that's only my recommendations going forward -- we only have 14 games left this season. I don't want to waste it on trying to get Foye's shooting streak back. He could just be auditioning for another team at this point.

Randy isn't in a slump, he's just regressing back to the mean. I hope he regresses elsewhere next season, or on this team in a much smaller, more focused role off the bench. But don't call it a slump. Math tells us it isn't one.