Share All sharing options for: Utah Jazz Player of the Week: Week 20

Not that bad of a week for Utah. As expected, we won at home vs the Pistons and lost on the road to the Thunder. However, beating Memphis did surprise me a little, and is impressive regardless of the location.

Mo had his best game since returning against the Pistons, scoring 20 on 9/14 shooting while finishing with 6 dimes. He wasn't as impressive throughout the rest of the week though, as he shot 2/7 against OKC and 5/13 in the MEM game (9 assists in those games). Since Mo has come back he has proven 2 things. One, his offensive game doesn't let defenses cheat nearly as much as they did with Watson/Jamaal on the floor. And two, his shot selection can be his own worst enemy. Williams has shown he can help carry some of the offensive load, but with some of the shots he takes it's no wonder he's been streaky (probably more bad then good).

Every time I write about Foye I wonder when I will get to stop talking about the ice cold shooting. It won't stop this week. Randy was a dreadful 4/17 from the field, and was just as bad from deep shooting 3/11 (27.3%). The worst part is, he isn't helping us much in other areas either. So how is he still starting at this point? I don't know...but at least Corbin has somewhat recognized it, as Foye played under 20 MPG (for the week) for the first time since the slump started (he averages 27 MPG this season).

Hayward played some good basketball last week. He led the team in scoring (while coming off the bench 2/3 games) and shot a much better % from the field then the past few weeks. He had 20 points in our loss to OKC and finished the Grizzlies game with 17 points, 8 boards and a dagger three.Gordon also led the team in +/- and finished the week with 9 assists to just 2 turnovers, not bad.

Not the best week for Millsap, who missed the Detroit game due to injury. He scored just 7 points in OKC (1-5 FG), but was okay in the Memphis win with 13 points and 8 boards. Shooting sub 40% and finishing the week with more TOs than assists is also a little concerning, however he does deserve props for his 6 thefts in only two games. Something feels off with Millsap. Whether it's a personal issue, locker room issue, or maybe a nagging injury I don't know...I do know it's hurting are playoff chances though.

Pretty sub-par week for Al as well. It is killing this team that our two best (?) players are both struggling when we need them most. Al scored 16, 8, and 14 points. These are not the numbers you expect to see from your number one option on offense. Big Al has simply got to make more shots. He cannot get away with shooting 40% a game when he is ending the week going 2/4 from the FT line. If the Jazz want to even sniff the playoffs we'll need to see some big time games from Al.

Honestly not that bad of a week from Earl. He didn't shoot or score a ton, but did better than usual, including 9 points in OKC (to go along with 6 dimes). His ast/TO numbers translate to 8.1 ast and 2.3 TOs per 36, which is pretty good. His energy is always good, but can lead to a mistake here or there. Not a major contributor, but it's hard to ask for much more.

Definitely not Alec's week. His minutes went down a bit, and so did the production. He scored just 15 points total and did it on 5/17 shooting. Not everything was bad though. I continue to like his defense, attitude and effort on the floor, and I love that he still is shooting well from deep (3/6 3PT). Burks has played really well as of recently so hopefully he gets back to his scoring ways.

Marvin had possibly his best game of the season against the Pistons contributing 14 points (5/8 FG, 2/3 3PT) 6 rebounds and 4 assists. However, he did quiet down for the next two games (9 total points, 3/9 shooting). This doesn't surprise me as he's been a little inconsistent on the offensive end lately. He has remained on the bench, and I feel this is best if he wants more touches. If the Jazz can find a way to keep him involved I think like he can have a nice role on this team and maybe be a little more consistent.

Rough week for DMC, who begun the week as a starter and ended it with DNP. It is sad to see him struggle as he made a positive impact throughout February and the beginning of March. He had the worst +/- on the team and was just 2/9 from the field. Will he make it back into the rotation?

Decent week for Favs. He still isn't making a big impact on the offensive end, but shot a nice percentage and was 4/5 FG for 10 points in the Memphis win. Derrick's shot blocking and overall D was once again, very good. He led the team in blocks (4.95 per 36) and is playing with very high energy. I think one of the next steps Favs needs to take is learning how to control his energy. Without a doubt it is a difference maker, but it can lead to some unnecessary fouls and turnovers.

Enes continues to impress, with 4 straight weeks of good basketball now. He led the team in FG%, was second in +/-and was also our top scorer off the bench. He played best vs the Pistons, finishing with 14 points (7/9 FG) and 8 boards in just twenty minutes. Kanter also was perfect from the line, shooting 10/10. It's hard not to be impressed with this kid right now.

Player of the Week: Week 20 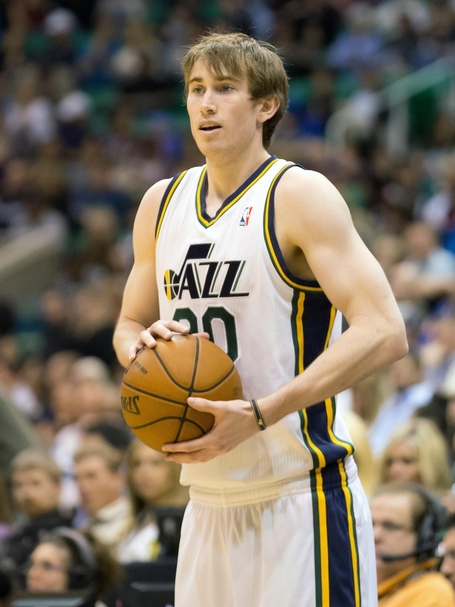