NBA Statistics: Looking at the Top 20 Scorers in the game today, and how much of their points come from the FT line

Share All sharing options for: NBA Statistics: Looking at the Top 20 Scorers in the game today, and how much of their points come from the FT line

First of all, this entire post is because of a tweet super Basketball (not just NBA) tweep Rafael Uehara (@rafael_uehara) made earlier on today. Check out his stuff, always so much fun to read and very educational. Anyway, here's his tweet. 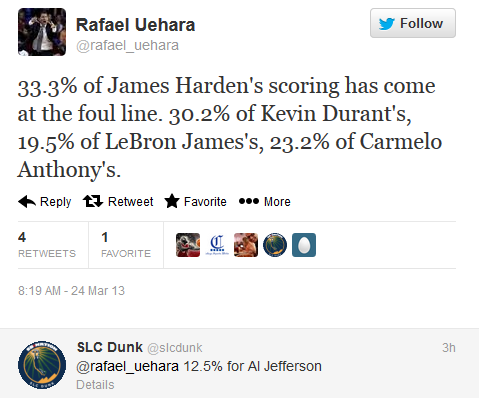 These are the Top 20 guys in PPG in the NBA right now. Some are slashers, others are bigs, most all of them can face up and shoot. A select few of them live at the line. All in all, they score a lot this year. Let's see how they stack up: 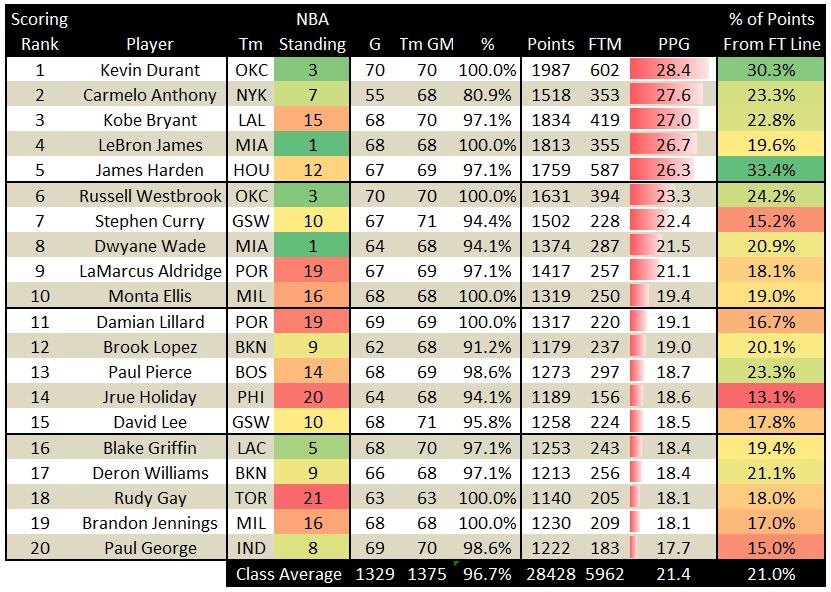 You notice here it's more than just PPG and the Percent of points from the FT line. I also wanted to look at the good teams and bad teams (apparently anyone can put up big numbers on bad teams -- but it's mostly volume). I also wanted to see if these guys played in a lot of their teams' games or not. For this group the answer is pretty much: yes, they play a lot of games. The second thing is that the guys with the better records seem to have the more efficient top scorers on it. If you are winning games usually your top scorer is also getting to the line. The major outlier here is Kobe Bryant, but we kinda *know* why he gets to the line a lot.

Al did not make it on the Top 20 scorers list (I thought he would be there, after all he makes $15,000,000 dollars (USD) this year) -- so I thought maybe the information would look different if we look at just the bigmen. Big guys play closer to the paint, and are more physical. They play through contact all the time, and aren't the 'pretty boys' who glide to the rim and get free throws. Let's see how it played out. 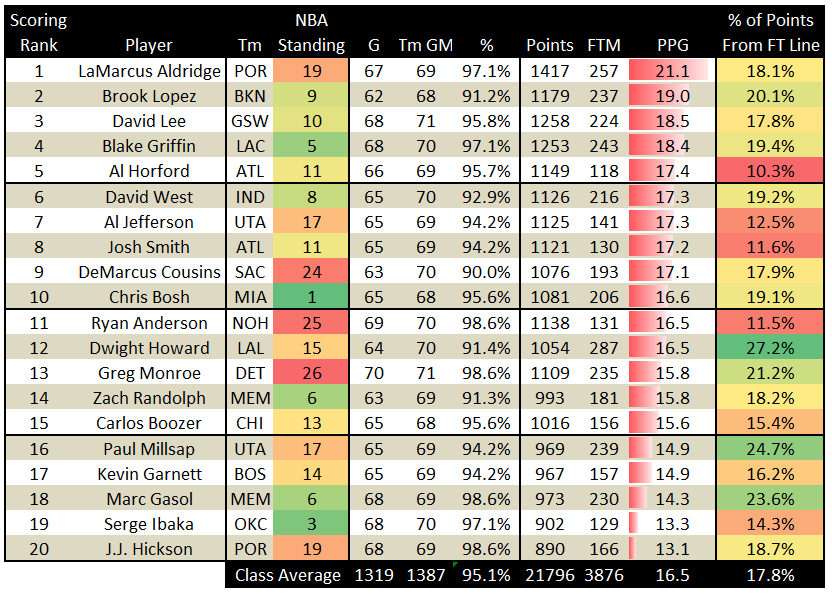 Wow, okay, it seems like the big man of old is dead. These guys don't get to the line as much as their more flashier counterparts do. There also seems to be no rhyme or reason between team success, and having a bigman who scores, regardless of efficiency. A lot of the 'doldrum' teams seem to have guys on this list though. It is elucidating to see that in this list Big Al is no greater than #7th best in PPG, and you could guess that the guys ahead of him would have a higher FG% as well as get to the line more per game. I didn't check it out, but the entire class average is to make 2.94 FTM a game -- and Big Al clocked in at 2.17 FTM a game. so he's below average in a free throw making group while shooting a very high percentage from the line for a center, and while being compared to guys like Ryan Anderson and Serge Ibaka.

The class average was 17.8% of their points came from the line and a few guys really stood out, Brook, Dwight, Greg, Paul, and Marc were all above 20%. That's one fifth (1/5) of their points coming from the line. It may not seem like much when the overall Top 20 group had guys like Harden where 1/3rd of all his points come from the line -- but it's still noteworthy. The class average for the first data set was 21.0%. There were a few guys in this bigman category who were *right there*.

Four guys stood out here for being really bad at this, Ryan Anderson (a face up shooter who plays 4, but isn't *really* a bigman by some metrics), the two guys for the Hawks (Horford and Smith), and our own Big Al. I was really confused when I did the numbers, but I expected all four of these guys to be higher in this percentage. Shows how much I know.

Maybe we lose sight of the value of Big Al when we compare him to the Top scorers in the game and/or the top Bigman scorers in the game. Maybe his true value is as the best guy on our team right now. And while it may not be remarkable in a good way against his peers -- against the rest of our team he's outright the best player. Right? That's why he's the only guy who hasn't had a stretch coming off the bench this year. He's without a doubt the best player on our team right now. 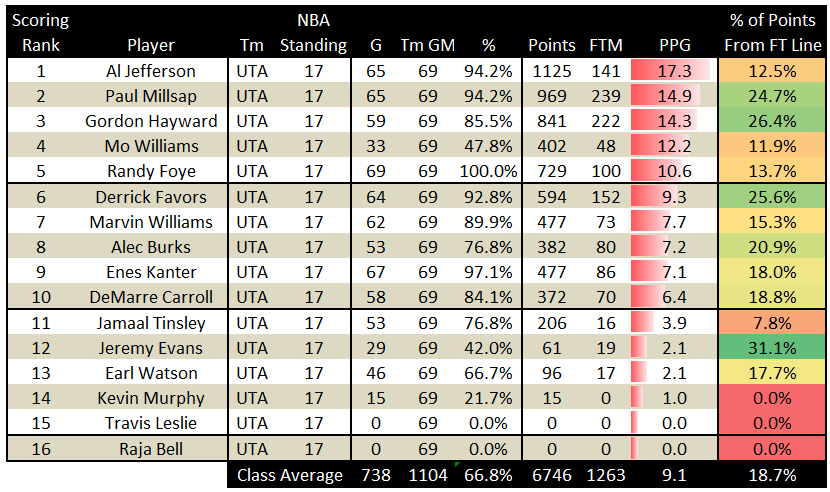 Welp. Four non-Jeremy Evans players made it into that 20% club -- G-Time, D-Fav, Millsap, and Erik Borge. (No relation to Victor Borge, the Danish pianist and comedian) Guys like Kanter and DeMarre were in the 18% range too. A lot of the players who fans love seem to be the more efficient ones. And what we learned form Data Set 1 is that good teams are usually led by efficient scorers. What we learned from Data Set 2 is that if you run your offense from a bigman you could be good or bad, but within that group Big Al was one of the worst in the critical thing we're looking at here (scoring from the FT line).

Within this group, our entire team, the cumulative numbers are 69 games played, and 6746 total points, with 1263 of them coming from the FT line. That's (in total) 18.7% of our points. And that's a player average of 1.71 FTM per game. So here's Big Al's 2.17 looks like a big number. Of course, three guys who get less MPG, less FGA per game, less touches, and aren't the first option still MAKE more FTs a game than Big Al does (Millsap, Hayward, and Favors).

So, that's just how the numbers exist. We can play around in our mind as to what would happen if Al took less shots (I hope he'd be more efficient), or if the other guys took more shots (we think they'd be more inefficient), and so forth. Also, yes, Burks is 5th best in FTM per game despite shooting like crap from the line this year. Maybe he's the first Volume Free Throw Shooter in league history? (What a strange set of skills he must possess)

Why are you so crazy for Free throws?

Free throws are important to have if you are a first tier go-to guy. First of all, it means you can only be stopped if the other team commits a violation of the rules. In the case of Data Set 1 -- if you are scoring a lot, and are NOT getting to the line, it's you taking yourself out of the game so the defense doesn't have to. If we apply that down to our team it could mean that Al doesn't get to the line because he's falling in love with his mid-range trebuchet shot instead of playing where a legit bigman should. He does a great job of never turning the ball over, but I think a lot of that is his insistence of shooting when doubled and tripled. Most of the times guys get turn overs from trying to pass. We all know trying to pass isn't a problem some of our players have.

But back to free throws, getting to the line is an essential skill for scorers to have. If you don't have it, you shouldn't be the top dog on a team. (Unless, you backed it up by shooting crazy good from the field or play great defense -- Jefferson is shooting 48.1 fg% this year, his FG% has gone down every year he's been on the Jazz. Let's not even talk about that other criteria.)

We should endeavor to champion someone who can be a real legit top scoring option. Very few of the numbers support the theory that Al Jefferson is one.

If you were paying attention no San Antonio Spurs player is on any of those lists. They are the Best Team in the Western Conference. They do it by sharing the ball, making the extra pass, and playing fundamentally efficient basketball. Their multi-polar offensive attack is hard to stop. If they ran everything through one guy and had the rest of the team sit and watch they wouldn't be so hard to defend. I think we could do well running a similar system, especially bereft of a real 'take over' offensive player.