Share All sharing options for: Utah Jazz Player of the Week: Week 22

Wow, quite the turnaround for the Jazz. A week after watching our team go win-less, we seem them do a complete 180 and win 4 of 5 games. While the competition wasn't exactly elite, I personally think all of the wins were very solid, especially the road win in Portland and a home victory over the returning Deron Williams. Utah has a legit shot at the post season now.

Really liked what I saw from Mo last week. He shot just under 50%, was 7/16 from behind the arc (43.8%), and went 14/14 from the line. While the more efficient scoring is nice, what I really liked from Williams this past week was the driving and dishing. He helped run the offense, but he wasn't forcing up a lot of shots either (only attempted over 10 FGA once). His best game was easily in Portland, where he and Lillard went off in the second half. Mo finished with 28 points (10-19 FG), 5 dimes, 5 boards and most importantly the W.

Shooting slump? What shooting slump? Randy Foye officially broke out of his cold streak last week, and boy did he do it in style. Foye went 3-6, 3-6, 2-2, 0-3, and an insane 8-9 on his treys last week to finish with a grand total of 16 threes on 26 attempts (that's a blazing 61.5%). In Foye's game vs the Nets he tied his career high, tied the Utah Jazz single game record, and set the record for three's in the third quarter and three's in a half. It was quite a show. Good to have you back, Randy.

Gordon Hayward's run of great basketball continued on last week, he's been great ever since coming back from injury. G shot over 50% in 4 of 5 games. The one game he struggled shooting in (BKN, 3-12 FG) he was still able to contribute 6 assists, 2 boards, 3 blocks (including a huge one on Deron) and 3 steals. That's one thing I love about Hayward this year, even if he can't find his shot he can find a way another way to help out. His ball distribution was fantastic as he was second on the team in APG, including one game of 8 dimes and two more of 6. He was also able to keep up the hot shooting from deep, finishing the week at 40%. A lot to like about Hayward's game right now.

Really nice to see Paul have a good week. He really played well all week long. Even in a game where he shot 2-10 (BKN), Paul was able to finish with a new career high in assists with 9, awesome! He was second on the team in steals, nabbing 2 or more in 4 of 5 games, and was also second in FG%. He finished the week with 17 dimes to his 9 TOs. This is the Paul Millsap we need, especially as the season winds down.

The good basketball continues on as we get to Al Jefferson. He was simply a beast last week. He led the team in scoring (shot 50% or better in all 5 games), was second in rebounding, and first in both blocks and steals. The best part about Al getting back into his scoring groove was the way he did it. He's been attacking the basket with much more aggression and is simply not settling nearly as much. Al can also thank Mo for the many good looks. But maybe even more impressive then his offense, was the improvements we saw in Al's D. Rarely have I seen Al make so many plays on the other side of the ball. It's amazing what a little extra effort can do, for both him and the entire team. Way to go Big Al!

Kind of a down week for Alec, who isn't seeing the floor a whole lot lately (only played 16+ mins twice). Alec actually had a pretty nice start to his week, going 4-9 in both of his first two games (combined for 23 points on 18 shots). However he shot just 4-13 in his next three games and only made 1 of his last 6 attempts from deep. Burks has been a little inconsistent lately, but it's hard to blame him as his playing time has been the same

Pretty bad week for Marv, minus one good game against the Nets. He shot a lowly 4-18 from the field in the 4 games for just 9 points (missed all 7 of his threes), but was a major factor in the win vs BKN contributing 14 points on 7-9 shooting. One thing has become clear to me, and that is Marvin as a slasher > Marvin as a shooter. When he is making an impact for us on offense it always seems to come around the rim, not the perimeter. Here's to hoping he can find a consistent role before the season ends.

Good and bad from Favs last week. On offense, Favors has really been finishing well at the rim, dunking whenever possible. I loved seeing him finish every game with at least one assist. I however do not love seeing him finish the week with 15 TOs, including two games of 5 miscues. As usual, his defense and rebounding was great. He led the team in boards yet again, and did it in 23 minutes coming off the bench. Derrick had two double doubles off the bench this week, finishing with 13 and 10 twice, once against the Sixers and again vs the Blazers. It was also nice to see him play well against his former team, he had 13 points (6-10 FG), 9 boards, and 3 steals vs the Nets.

Player of the Week: Week 22 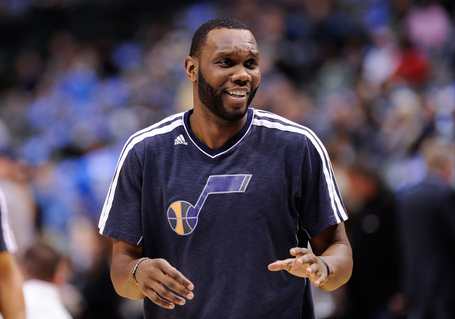