Utah Jazz: Building a winner, and the positive progress we see

Share All sharing options for: Utah Jazz: Building a winner, and the positive progress we see

It's high time we look at the baby steps we're making as a franchise from year to year, and recognize -- okay, so we're not turning things around in the blink of an eye, but we are making progress. Or at least, I think we are making progress. I'm also going to admit that I would be making different personnel moves than the Utah Jazz have been making; but I'm also not in a position to really criticize. It's not like I'm the GM of another NBA team, a team doing better than the Jazz. I'm not a GM of any team. I've never played in the NBA. It's absolutely impossible for me to ever know anything about anything, when it pertains to something I've only watched for over 25 years of my life. (For the record, I've watched a lot of Bollywood movies too during that time frame, and I'm not a great singer or dancer either) But this isn't about the ego orgasm that Spencer talked about. This is about actually seeing that good things are happening.

And good things are happening.

Of course, I like information. And good things happening is nice by itself. But we need to gauge it against something else. What we have at our disposal right now happens to be a lot of evidence of things, good and bad, against time. So let's try to break things down by time frame and see what things are happening. For me, the smartest thing to do was to look at every year since the last time we made the NBA Finals. That 1997-1998 Finals is year zero for us, and every five years after that was a five year plan segment in time. The team may not have reached all of their goals during that period of time, but some goals were met.

And even through all the failures, for the most part the team has learned a little more about who they are, and what they are trying to do.

Good things do happen. But they happen more frequently when you have a plan and a direction. This is the big question mark for a lot of fans right now. We don't know if there is a plan, and if there is a direction. I think it's only fair to admit that these are legitimate concerns because our team is in a state of flux right now and our front office keeps things close to their chest. This isn't chicken little speaking here, this is me looking beyond the ideas of one season in a vacuum.

We fans always kind of knew what the team we root for was trying to do over the last 15 seasons. The next 5 look murky. But before we get there, let's look at how we've built a winner here, and the positive progress we've seen. 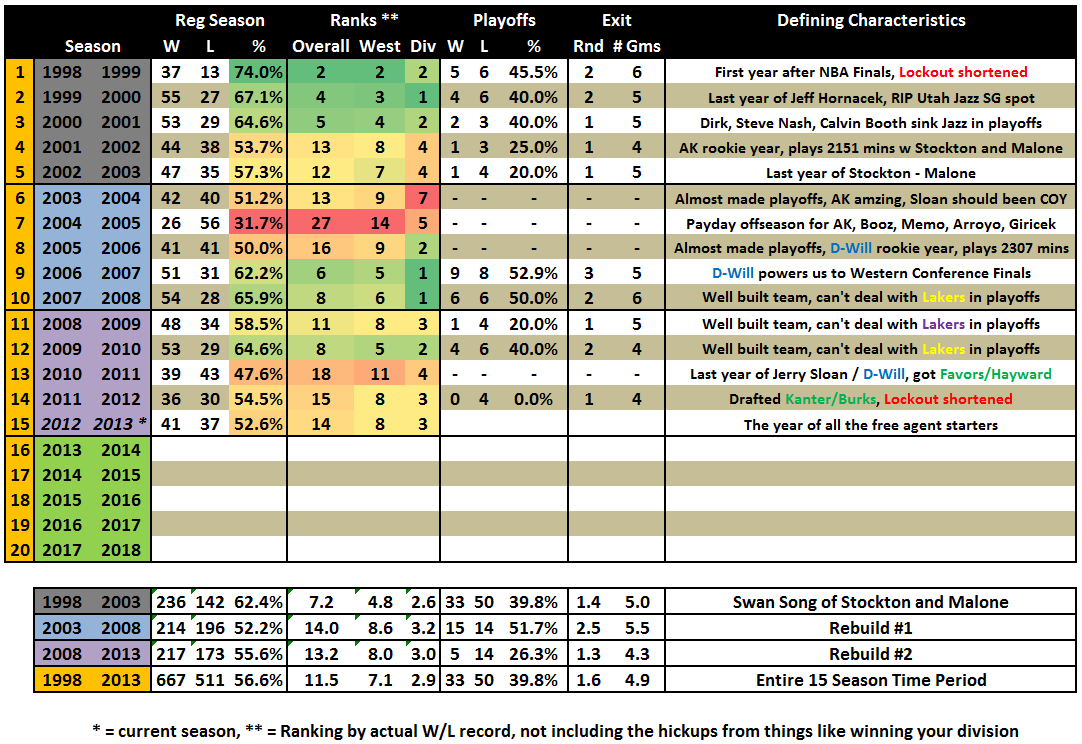 (Just probably better to click on that to zoom in)

Let's look at some of the positive progress, the part of what I see our team doing year from year in the purple zone that makes me feel confident that while the plan may be unknown, that at least we're TRYING to build a sustained winner.

Not everything the team has done has been a failure. The team is growing slowly, but I see progress being made year from year. We've adjusted our expectations of what this team is, and what challenges face us. We're not a contender right now, and the decision to try to win now at the expense of development is confusing to some of us fans. We don't know what the plan is, and we can only speculate on how the next 5 years goes. Each of the previous 5 years were more clearly defined. The uncertainty has made this year so crazy for us fans. But I do see progress being made. Specific problems are observed, and attempts to fix them are made. Sometimes it doesn't work, like signing John Starks as a Hornacek replacement. Sometimes it looks like it will work, like getting Favors and Kanter to make us bigger, stronger inside, get more rebounds, and block more shots.

The main challenges we have now are point guard play; defense; getting to the line; and pace of play. A few seasons ago we had simple things like getting rebounds, or making a shot outside of 15 feet on that list. Those things were problems of previous seasons that our front office, coaches, and players have eliminated. I am positive that our team, especially with Dennis Lindsey (if he's not just a puppet) at the helm, will continue to make good progress on the other problems.

Slowly and slowly we're building our way back up the mountain. It's not a quick fix like signing five guys to big contracts in the off-season, then getting a lotto pick All-NBA player in the next draft. This looks more like a slower, more meticulous build. We're not a contender right now. But I can expect us to continue making moves towards being exactly that.