NBA Player Development: Minutes as an antecedent towards success, or a characteristic or quality of successful players?

Share All sharing options for: NBA Player Development: Minutes as an antecedent towards success, or a characteristic or quality of successful players?

If you don't think they do, you are either being diplomatic, dishonest, or are dumb. (Pick one, which is it?)

Experience does matter. You can kill it in practice, but if you never play in the games, a lot of that experience may not translate over. On the other hand, if you regularly are put into real games then what you do in them will build your confidence level within them. Speaking in front of a mirror at home can help, but the more public speaking you do at school/work is what will give you the needed experience and confidence to perform at your best. Hit a post jump hook in an empty gym? Good. Taking five attempts in a game, every game? Better. Practice is nice. Experience means more.

So, are minutes an antecedent towards success in the future, or just a characteristic or quality of a successful player? Do minutes make the player, or do the best players earn the most minutes? You could argue for that either way. The answer is that it's probably both. It's funny, because David Locke's most recent post makes it clear that it's important to look at what our team is doing now -- but only after we automatically eliminate HOFers. Smart move, Lockey. This is the same employee who chided one of my pieces for not including data on Millsap when making a point about playing time distribution (Sap wasn't the argument, but it's always clever to divert the attention). Let's not divert the attention or make the smallest of cuts in order to serve our paid messages.

The bottom line is that we have four young lottery picks on their rookie contracts. Ignoring the possibility that our scouting department grossly over-estimated the quality of these players, we should assume a positive return on the investment (meager) that we're making with them. Today's NBA is not one that assumes absolute loyalty where a Karl Malone type will keep signing to play with the team that drafted him, implicitly. You aren't guaranteed that a young hot shot is going to want to stay with the team that drafted him. (Ask Toronto or Cleveland fans) The time frame to get a return on a lotto pick is thus shortened.

You're only screwing yourself (in the butt) if you can only get a star through the draft, and then go out of your way to make those guys a) either want to leave, or b) never make them stars. (And really, the Utah Jazz aren't going to sign a star in free agency or trade for one. Ever. And the Utah Jazz are never going to be real contenders without a star . . . do the math, that leaves an OVER-reliance on the draft, and thus inflates the importance of scouting well *and* developing well) The clock is ticking on all of our lottery pick rookie contracts . . . we DO need them to be good sooner *and* later. Delaying their progress is a foolish idea. And I'm not going to go into my whole Watson/Piaget/Vygotsky rant here, so you are spared.

But beyond all of that preamble . . . it doesn't matter if you THINK it's the minutes that make the player, or if you think it's the player that gets the minutes. Let's just focus in on the most elemental parts of this Jazz situation:

None of these 7 points can be honestly refuted by anyone who uses a sufficient and valid sample size.

Compared to All-Stars, our guys are behind the minutes curve. Compared to All-NBA guys, our guys are behind the minutes curve. Even against their own draft classes, this has also been demonstrated. I want our guys to succeed, I do not think they have been given the chance. Now, let's break it all down and look at the last 40 freaking years of the NBA, and do this apples to apples. Let's do this from exact NBA Draft position against exact NBA Draft position. Regardless if you think minutes help you develop (or not), our guys categorically are getting less minutes than the averages.

How do Derrick Favors and Enes Kanter stack up against the last 40 years of the #3 Draft spot:

Okay, a player plays games in the NBA. These games are in the regular season and the playoffs. And these players are young, and need to get better asap. You DO get better with more confidence. The majority of confidence comes from experience and success in attempts at building new skills. And the #3 spot isn't supposed to be a role player. Not with this cap. You can't afford to be paying a 23 year old guy $4 million to be a role player. Your #3 spot is supposed to be a money maker. Someone you can put out on the floor, and have them contribute early and often in their careers -- regardless of college experience. You're drafted that high for a reason. And if you are drafting that high on the hope and prayer that they need to be brought along slowly, and don't understand that rookie contracts expire, then you don't deserve to be pulling the trigger on who you draft.

Here's the data for this draft spot -- scroll around to see the names, and their cumulative minutes. (N.B. This was tabulated in the first few days of the playoffs -- so a guy like Harden has even more minutes now, for example.)

I know it would have been easier to just link to a table someone else made, but no one else did this. This is original research. It's a lot of numbers. And it's a large sample size. More than some other blogs give you. That's fine. Let's look at the critical data (cumulative career MPG at each year) in bar graph form. 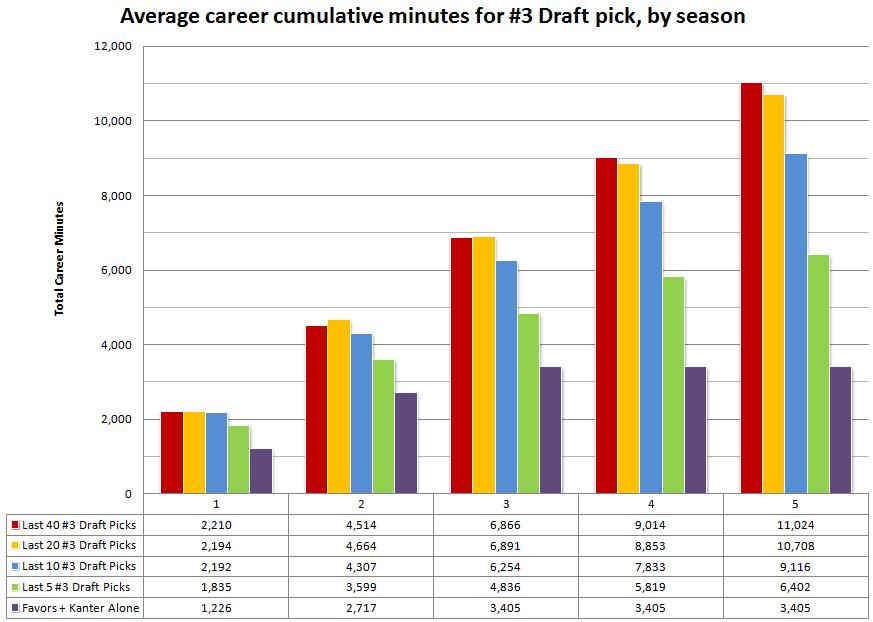 Yeah, not exactly ahead of the curve there. Not exactly even keeping with the pack either. But if you hand pick the players to check Favors against in a careful way you can make it look nicer. The numbers for Derrick's 4th and 5th season remain to be seen. Kanter is in the same boat but also needs to play his 3rd season still. Even if Kanter plays 2k mins next year, the cumulative average for our boys will still be behind by 2k minutes. But of course, if you don't believe minutes mean anything, then we are still good. I don't know what the milk-dips to cookie dunk ratio for 6.8k career minutes are (as an average) for a third year #3 draft pick . . .I hope some day David Locke reveals the formula for that. (Was D-Will over dipped, or did playing 3.5+k mins in years 2 and 3 help him become an Olympian?)

How does Gordon Hayward stack up against the last 40 years of the #9 Draft spot:

The #9 spot is far from the money maker that a #3 is. But it is funny in it's own way, because Gordon is the only guy who has gotten consistent minutes in his career, akin to that of a player on a positive development trajectory.

I think that this is what you could build a case around. Hayward is "right THERE" or slightly better in total minutes vs #9 picks. He's also the guy we have seen the most confidence from on the court on offense and defense out of our youth. He's also the guy we've seen the most on court production from as well, from stealing the ball from Kobe Bryant, getting chase down blocks, or hitting game winners. 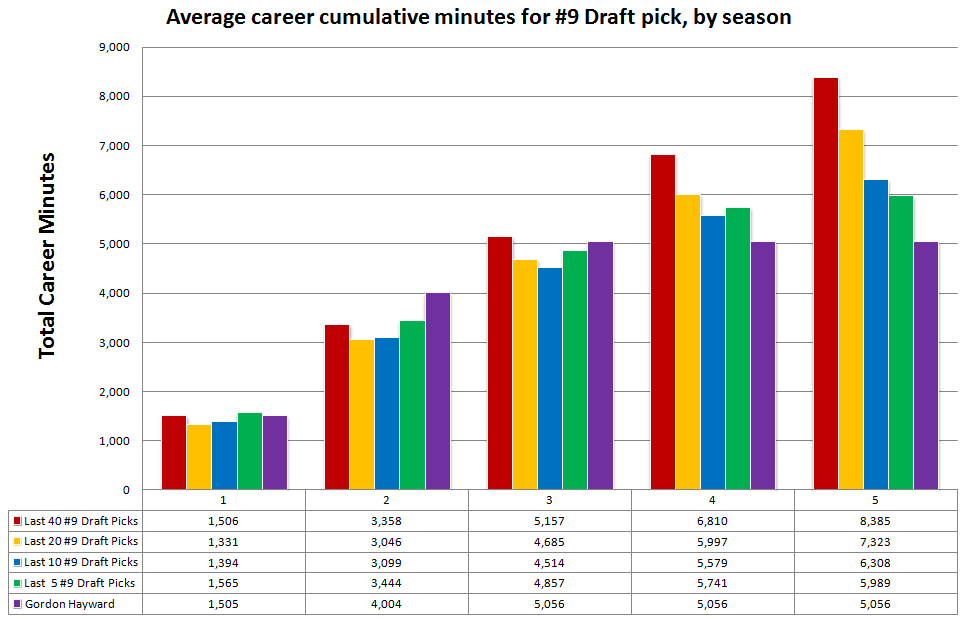 Of course, it couldn't possibly be the minutes. It's some sort of development fairy that visited him in his sleep. For we see Hayward being a productive player, we see that against his draft spot he's right there in terms of career minutes, and we see him play with confidence. He's also the guy who has played the most out of our lotto picks. But I thought too many minutes is bad, and just enough is the oreo, and, and, and? Okay, so Hayward's mins are just right, but are more than Favors, and these many mins for Favors would be too much?

But what can I expect from those who laud and disregard per 36 stats when they best serve their own argument? I could pull the reverse Locke and instead of removing the data from HOF players, remove the data for busts at #9. I guess Dale Ellis, Charles Oakley, Dirk, and Iggy are over-dipped because they played thousands of more minutes than Gordo did. Oh, but that would be dishonest, and a small sample size.

How does Alec Burks stack up against the last 40 years of the #12 Draft spot:

The #12 spot is where all-around players go to die, and where specialists bloom. The players here suck, right? So Burks should be ahead here. 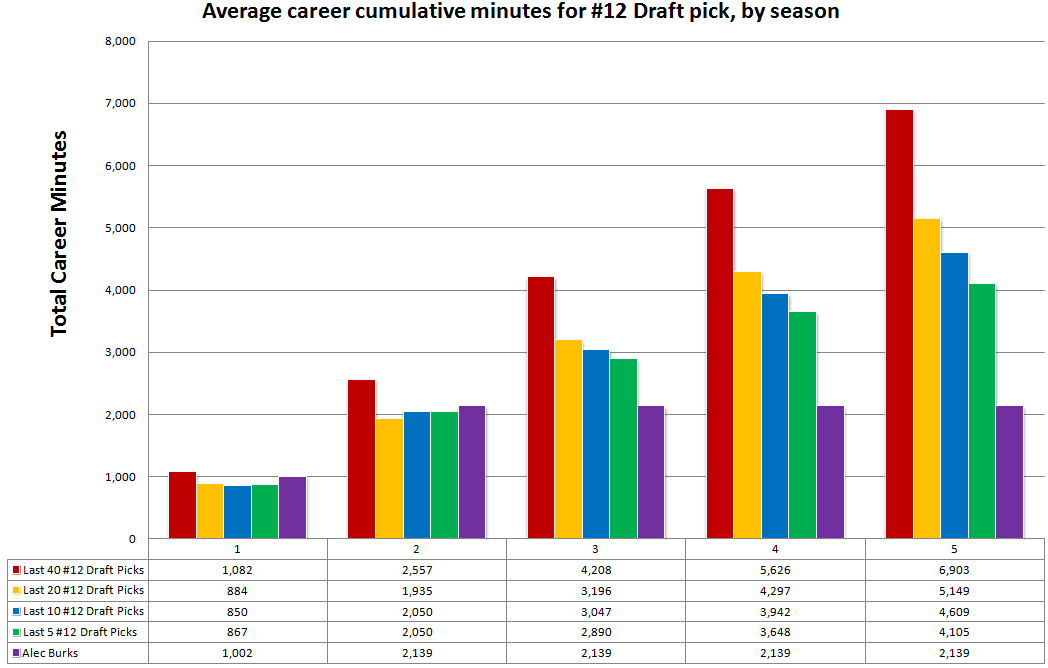 Freaking Hot Plate Williams played more. Former All-Star Kelly Tripucka played a thousand more mins in his rookie than Burks has in 2 years. I guess the only answer is that Burks must really suck (some Jazz media guys are hard already), or Raja Bell / Jamaal Tinsley are too awesome. Or maybe he's an under dipped cookie? Not according to the recent years, but let's not forget that the last 5 and 10 years data sets include a guy (Lamb) who has only played 1 season - skewing the data. (This is also the case for Beal and Drummond)

Yup. Initial defense force will say "LOCKOUT !!!11!" but if you think Alec was going to play 500 more mins in the 16 (82 minus 66) games had there been no lockout you should probably should stick to milk and cookies; math is out of your league.

I chose total minutes by season, because a long playoff run and playing time in it is useful too (James Harden played 537 and 630 more mins in 2nd and 3rd seasons for example -- Kanter has only 43 when we made the playoffs); and grading them by season. In this version of the NBA it's season, not age, that is the true denominator. Why? Look at the rules for rookie contracts again. Lastly, I used numbers. And I used every data point for 40 years. (I did not eliminate HOFers, I want to compare our lotto guys against the best!) And I did not use subjective, idiotic terms -- that are internally inconsistent (Hayward's mins are just right, but they are more than Favors' mins, and had Derrick played as much, he'd be over dipped -- they are of the same draft class).

Maybe minutes help a player get there faster? I wonder how Karl Malone would have developed playing less than half a game, off the bench, in each of his first three seasons -- instead of 30+ right out of the gate? Or maybe it was his greatness that allowed for him to play so much so early?

What I do know is that by the numbers, against a non-manicured sample size, our guys have received BELOW AVERAGE on court experience while winning ZERO playoff games in three seasons. (A rare feat that we don't see Championship winning franchises make!) I also know that certain media members get financial performance bonuses for using social media to proselytize our failures as calculated goals met by unerringly precise, design.

EDIT: Looking at the first four seasons for the core of three West conference Playoff teams -- and us. (Reg + Playoff Min)

Do not adjust your screen, this is how the cookie doesn't crumble.