The New Orleans / Utah Jazz are going to be 40 years old next year. I can only hope they at least have a 40 patch on their jerseys next year, but I don't know if that's going to happen. It would be nice though. You know what is has been pretty nice over time? The Jazz have been a strong offensive team, with a 39 year average Offensive Rating (ORTG, or points per 100 possessions) of 106.3 points with a standard deviation of +/-5.0 points. What's not been so hot has been our defense over the same period, where we have a Defensive Rating (DRTG) of 104.9 points with a standard deviation of +/- 3.2 points. Effectively, on any given season we're going to be scoring points and giving up points. But this is what the data over four decades say. If you break it down into distinct periods you get different results. But more on that later.

First, let's take a look at how we've fared over the history of our team! 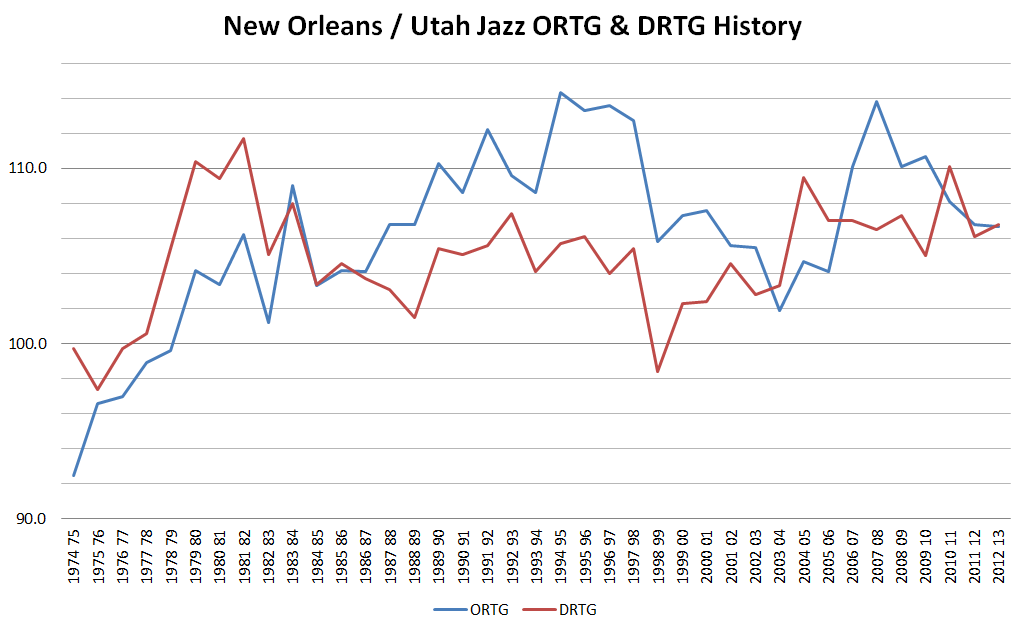 Yikes, we used to be really bad on defense and offense. When John Stockton and Karl Malone took over our offense went to new highs -- but the defense didn't come around until our finals years (Or when Mark Eaton was blocking 5 shots a game). The ORTG and DRTG crisscrossed a few times -- and our ORTG seems to fluctuate much more. It swings up when we have a great PG on the team like Stock or Deron Williams. Bereft of a good PG our offense seems to stall. Since our mini-zenith with Deron our ORTG has gone down every year since 2007-08. (For the most part) If we are going to be a defense first team moving forward it will be interesting to see how these two factors (ORTG and DRTG) play out over the next five years.

Our offense looks good, and somewhat stable, which is what we all assumed. It's the defense which is the problem; however, if you break it down not by decade, but by 5 year spurts you see some really crazy stuff. Probably a little too crazy for a Friday night though. Clearly, the last 5 years have been diminishing returns territory.

What changed? Well, the Coach changed, the playbook changed, the roster changed, and the rules of the game changed. So a lot has changed, and over the last decade we showed our WORST defensive rating ever. Really. Ever. Back when we were in New Orleans we played better defense, and our starting center was like 6'7.

I expect things to be much better next year. Especially if our front office goes with the "Be better / get better" off-season plan. (Not that I'm biased . . . )