What if: the Utah Jazz season actually started when Trey Burke started playing?

The Utah Jazz have played 39 games this season. The first few weeks were a trainwreck with 5 rotation players out. Since Trey Burke's return the team has started to play a completely different game. What would their record look like if the season started with Trey?

Share All sharing options for: What if: the Utah Jazz season actually started when Trey Burke started playing?

I think it is fair to say that the fortune of our Utah Jazz franchise changed in a positive direction when the front office moved up to trade for Trey Burke on draft night. Ideally he wouldn't have gotten injured and the potential Rookie of the Year would be farther along in his NBA career at this stage. Still, things are looking good. Things didn't look so good when he fractured a finger in his shooting hand back during the preseason. We tried to figure out how many games he would miss for this injury, and guess what the Jazz record would be as a result. Post op, Burke was on the mend, and I think we all felt a little bit better about things off the court.

It wasn't until he started to really get his feet on the NBA courts that Jazz fans started to feel really great about our young point guard.

The team started to play better with him on the court (no offense to Jamaal Tinsley, Diante Garrett, and John Lucas III); and as a direct result the team started to win games. There were other factors as well, like the return of Marvin Williams and Jeremy Evans -- but injury recovery was just one part of it. The main part I think was having an actual point guard help direct this team and make this a team; not just a collection of Gordon Hayward pick and rolls with Derrick Favors.

So after 39 games the Utah Jazz are 13-26. That's not a good record. But you know what? Since Trey started playing the Jazz have been 12-15. So, using the magic of math pre-Trey the Jazz were a whopping 1-11. It's not just the point guard spot, or lack of any depth with five rotation players out to start the season (Trey Burke, Marvin Williams, Jeremy Evans, Brandon Rush, Andris Biedrins -- and don't even lie to yourself, if Rush and Biedrins were healthy they would have been rotation guys at the start of the season).

But I can't help thinking "what if" the Jazz season started with Trey Burke. Let's take a look at the games they played and their performance in them. 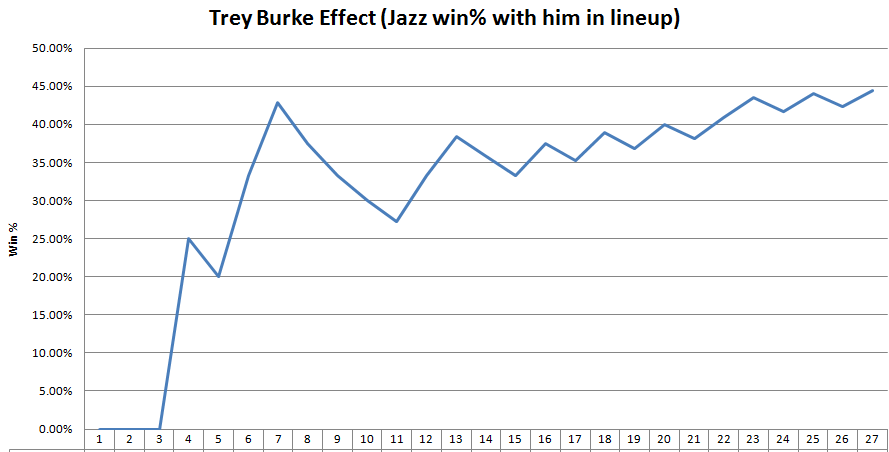 This looks like a trend, if you ask me.

So kudos to the Utah Jazz and head coach Tyrone Corbin. You guys have a great player in Trey Burke. Stats aside, the team is performing well under his control. You can't measure how much of a winner you are in a draft combine. But the Jazz look to win a lot with him in the lineup and ready to play.