Gordon Hayward and Alec Burks, and being a bigtime, everyday scorer

Gordon Hayward and Alec Burks both have gone for 30+ points twice this year. Can they become everyday bigtime scorers? Which historical player templates do they resemble? And is it likely they every get there?

Share All sharing options for: Gordon Hayward and Alec Burks, and being a bigtime, everyday scorer

If you are a long suffering Utah Jazz fan your greatest moments as a fan are very bitter sweet. During the Golden Age of John Stockton, Karl Malone, Jeff Hornacek, Jerry Sloan, and Larry H. Miller the team went to the Western Conference Finals five times within a seven year stretch -- going to the NBA Finals twice. Ideally, you win the Big Dance at least once if you go to the Final Four those many times in short succession. The obstacles to the Jazz in the Western Conference were the Portland Trail Blazers, Houston Rockets, and Seattle Super Sonics (I see ya Oklahoma City Thunder); and in the East, well, just one team -- the Chicago Bulls. If you get to that "boss level" match-up against the East it means this is the final boss. And despite all of the ups and downs in those 12 games the bottom line is that the Jazz offense was not dynamic enough to keep pace with the Bulls offense. Both teams were very solid on defense, the Bulls moreso than the Jazz. Both had star players. But the Bulls stars were brighter and were in an offensive system to allow for more regular contributions from their role players.

It's not anything to be upset about now, so many decades after the fact. I'm still upset over it because I'm a fanatic who love the Utah Jazz. But the shift from a traditional offense to a dynamic one was a flashpoint in NBA History. Since those Bulls teams every NBA Champion has won with a dynamic offense -- except for Shaquille O'Neal's Los Angeles Lakers and the Voltron Detroit Pistons. And the key to these dynamic offenses are . . . dominant wing players who can change the course of the game because of their individual skills.

This is a hurt that still burns for Jazz fans who lost Championships because the other team had:

Really. The bottom line is that players win games, and we've always tried to go back to traditional offense, and have it be a ball dominant point guard passing to a bigman. That works only if you have a once in a generation bigman who is a scorer (Shaq), or a shooting point guard (Tony Parker, Chauncey Billups). It never works without those outliers. Which is crazy, because now the outrageous wing dominated offense is the more reliable one. (Thanks to the removal of the hand checking rule, and the massive change to the illegal defense rule now that we can go into zone defense.)

So. Point forward who has great court vision and plays defense? Shooting guard who lives at the line? Sound like anyone we have on the roster?I think the template is there for Gordon Hayward and Alec Burks to be players to fill those roles; but it remains to be seen just how good they can be. Are they the standard definition TV of Scottie Pippen and Michael Jordan, to the 4k pixel Ultra High Def 3D TV of the actual Scottie Pippen and Michael Jordan? Or better than Standard Def? Or worse? (What is that? 1280 KFan Radio?)

While both Bulls players were super athletic and great defenders . . . they both were capable of winning games with their offense. It's one thing to be able to score at times. It's another thing to be reliable as a scorer. And beyond that, very few become everyday scorers who score big.

This season both Hayward and Burks have had 30 point games. They both went to 30 twice this year. Curiously, both hit 30+ 13 games after hitting 30+ the first time. The idea I heard on twitter last night is that Hayward is more consistent and Burks is hard to rely on. (If you look at the stats game from game you'd see that BOTH guys are far from consistent.)

But this is what we get: 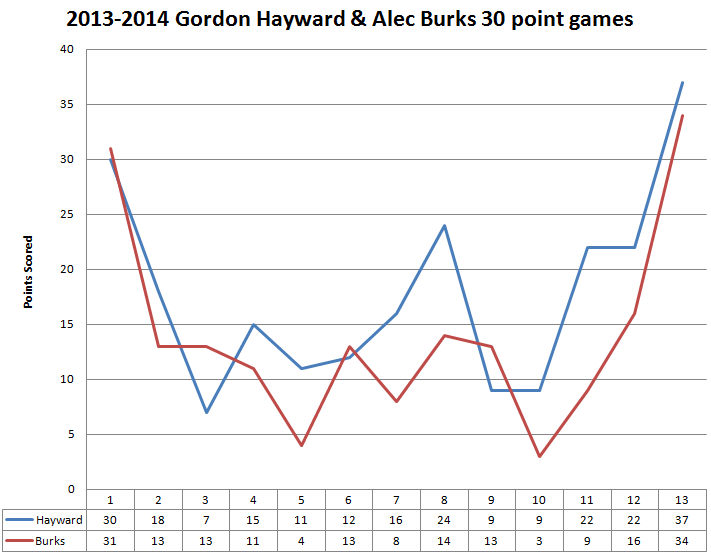 For the season Hayward is averaging 17.1 ppg. During these 13 games he averaged 17.9 ppg. That's a scoring increase of +0.9 ppg from his season average. The Standard Deviation for his scoring during this period was +/- 8.91 points. That's not a tight grouping. That means it's almost 10 points up or down per game.

For the season Burks is averaging 12.8 ppg. During these 13 games he averaged 14.0 ppg. That's a scoring increase of +1.2 ppg from his season average. The Standard Deviation for his scoring during this period was +/- 9.07 points. That's also not a tight grouping, as it's also almost 10 points up or down on any given game.

Yes, they can hit for big numbers, but my conclusions are:

The idea that these guys can be like Air Jordan and Pip are nice ideas. Their games can fit those templates, but they are both far from being everyday scorers in the NBA; let alone bigtime scorers. If we want to move towards a more modern dynamic offense that's wing oriented we may need to a) make these guys better scorers somehow, or b) draft Andrew Wiggins.

PS. Oh man, Karl Malone did not go 13 games between 30 point outbursts. His boxscores are a sight for sore eyes . . .