Utah Jazz 40 at 40: Getting down to business with Gordon Hayward's Hip Flexor Injury

Gordon Hayward had 'the' signature game of his career against the Oklahoma City Thunder. He had 37 points, 11 rebounds, 7 assists, 2 steals, and 1 block on that night; and Hayward led the Jazz to a big upset W. Then he got injured. Let's investigate.

Share All sharing options for: Utah Jazz 40 at 40: Getting down to business with Gordon Hayward's Hip Flexor Injury

On Friday, January 10th, 2014 something happened. The Utah Jazz defeated the Oklahoma City Thunder by the score of 112-101. Down the stretch of this close game Jazz guard/forward/golden ring to rule them all Gordon Hayward took control and started to play at an unbelievably high level. He finished the game with 37 points (off of 16 shots) and had 11 rebounds, 7 assists, 2 steals, and 1 block. He got to the free throw line 13 times, and drained 2 of his 3 three point attempts. And he shot 81.3 fg% against the team that represented the Western Conference in the NBA Finals the previous season. Of course, OKC was hurt and missing two of their Big Three. But a win is a win, and it was one of the best games by an individual player in Utah Jazz history.

Of course, the next thing we know is that he sustained a left hip flexor injury that same night, and has not practiced, or played in any games since. It's now January 19th, nine days and five missed games later. The curious thing is that Gordon has been listed as a "Game time decision" for each and every game since then. I had to look into this a bit more.

When muscles contract they "flex", which means bringing two parts of the body closer together. When you flex your arm you are physically bringing parts of your arm together. The opposite of flexion is extension, which is straightening something out. If you extend your arm to its' fullest you can reach things far from you, and this is because your body is straight and not folded together. The Hip Flexor muscles, duh, flex the hip. What does that mean? Well, it means it brings the leg into the body. When you sit on a bench with a fat guy and your thighs touch, and it's awkward, you bring your legs together to create more space. This is done by the Hip Flexor muscles (among others). There are a number of muscles that help achieve Hip Flexion, the major ones are the Iliopsoas muscles (Psoas Major, Psoas Minor, and Iliacus), depending on who your professor is, they may also want to know about the muscles that help this from the glutes and other places too. And depending on who your prof is, he or she may also want a run down on all the Hip extensors too. But this isn't an oral exam on Anatomy. This is a sports blog.

Anyway, the muscles on the anterior (front facing) side are the ones we care about the most. The Iliopsoas group and some of these adductors from the Anterior compartment. 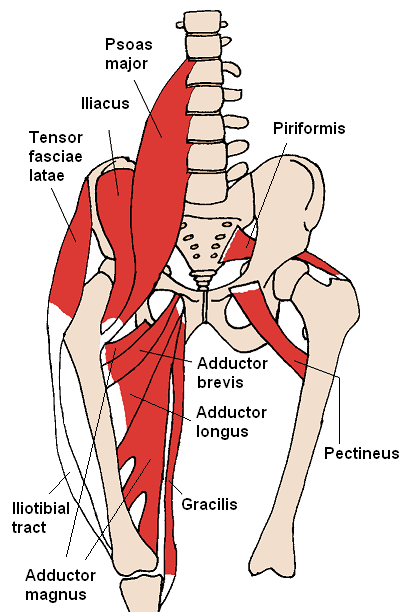 Not all of these, but the full answer is all of these.
Used via permission from Creative Commons something something.

So the muscles that help Gordon bring his left leg back towards his body are strained. What does this mean? Well, for one thing it means that there is pain and a reduction of normal movement. Because the Jazz don't give full medical reports to the media, we don't know the exact muscles hurt, or how badly.

How does one get this injury?

Well, there are a number of ways this happens. It is usually a quick movement that causes it, and usually in relation to being in a very overt extension right before the injury. It happens to runners who have to sprint from stop, and happens to soccer / football / futbol players who have to swing their legs from an extension to rapid flexion when doing things like free or corner kicks, or just kicks. Kicks in general. This happens to martial artists too, so kicks is basically what I'm saying. How does this happen in a basketball game? Well, sprinting (running) is one way. Another way is a quick change of direction (following an offensive player through screens, or on the ball defense, or dribble moves or whatever). The one which I'd like to see more peer review on would be jumping. What is a jump? It's flexion - extension - flexion (when you land). Seems like a particularly hard fall could do it too, like an airborn offensive player fouled on a layup who does not land 'ideally'.

Situations also influence this type of injury. Coming from a dead stop to full on action is one. Tightness from improper stretching is a factor. Being in a cold environment is another. (I don't know when the injury happened, but if it was 3rd quarter this all makes sense as he's tight, not loose, and not warmed up as much as he would be during the game.) Of course, people who have sedentary lives or hobbies are at risk too -- like the guy who plays video games all day and gets injured in his weekly kickball league. I know Hayward loves video games, but he doesn't classify as sedentary here. He's a professional athlete. Of course, as a professional athlete he is really strong compared to normal humans. An imbalance between his flexors and extensors muscles could also cause this. I can assume that for people who do a job where running and jumping are important, having really strong and powerful extensors muscles are a must. And again, class, what are extensors muscles the opposites of? Yes, flexor muscles.

There are three grades to a Hip Flexor injury:

So Gordon has either a Grade 1 or Grade 2 injury. If Gordon was listed as a GTD for the very next game (3 days later), then it would indicate to me that they were considering playing him. That in my mind rules out a Grade 2. If it was such a mild injury . . . . and Gordon has now sat out five straight games and been injured for 9 days . . . there's something here. You never rush a player back from injury too soon (R.I.P. Mehmet Okur 's body), so the team is being cautious with him. The Jazz don't play again until Tuesday, which would make it 11 days from injury. That's close enough to 2 weeks. I would like to think that he's 'back' by then. If not, well, this becomes either a misdiagnosed injury, or a tank oddity. Yes, yes, some Grade 1 strains heal in 3 weeks, but that's really milking it -- especially if the dude is listed as a GTD for. ever. game.

It is premature to call this a tank, but when you hold out a player beyond the normal length, that's kind of what it is. If Gordon misses more time I will be okay with calling it that. Even with the idea of "don't rush him back." I agree with not rushing people back, and I also agree with milking this injury. But I'm pro-Tank. Don't suppose that the Jazz decision makers (e.g. not the players and not Tyrone Corbin) aren't also pro-Tank. It seems like they are. Just get over yourself and the misplaced nobility of not tanking. It's how you stay competitive as a small market team that can't lure in top tier free agents. But that's a tangent.

How do you know when you are ready to go, after a theoretical healing process. (I'm deleting the types of stretches Gordo needs to do. I'm not his doctor.) The basic requirements to be cleared are (easy to hard):

Players who are ready to return can do all of these things. Tank oddity or simple injury aside, Gordon can't do all of these things right now. How far along is he? I don't know. But he's being held out of practices so that probably means less than all, which is the right call. I would never want an athlete to risk an even worse injury by coming back early. Especially if there is nothing to play for. There is nothing to play for. It's just really really interesting timing that Gordon gets shut down right after the best game of his career, going for 37 / 11 / 7 / 2 / 1 against the then Western Conference leading Oklahoma City Thunder -- and a win. It's also really really really interesting that Gordon has such a great game, and we're presuming the injury happened during the game, but he was not affected by it -- but now can't even practice with the team and has sat out of the last five games.

In the big picture it at least allows for Alec Burks to start at shooting guard and play alongside Trey Burke. It's nice to be able to see that and it gives us data to grade that pairing. Or, you know, actually ALWAYS play them together and get more data on that faster. But hey, that's another tangent.

I honestly don't know what to think about this injury. If it is as bad as to keep him out of more than a week of work he should never have been listed as a GTD. If it's not a Grade 2 injury, and only an acute Grade 1 injury at that, then he still has time to recover within that normal recovery window; but should be kept out, and again, be shut down. The question begins at the consistent label of being a Game Time Decision. Someone somewhere is doing a funny job. Either Gordon is unsure about his body, or told a number of things about this injury. Or the coaching staff isn't getting the full report -- and thus uncertainty creeps up -- from the medical staff. Or there is a communication breakdown between the coaching staff and the PR department. Or, they are milking this injury and doing a bad job about it by trying to project this idea that Gordon is right around the corner.

If Gordon was even considered to be good to go a week ago, then this is too long a time to be out. If he is really this injured, then he should never have been considered as such. And that's the problem here.