Remember the good old days when the Jazz would occasionally get blown out, and also occasionally blow out the other team? Times have changed. Take a look!

While a lot of data can be collected, when you have sufficient data it all regresses towards some sort of mean -- away from the outlier data. Besides sending you all to bed with the most boring sentence ever typed, it's also my intent to talk a little about these outliers. In sports these outliers are seen everywhere. In size you have a guy like Rudy Gobert. In randomness you have a team like the Detroit Pistons beating the Los Angeles Lakers in the NBA Finals. On the game to game basis the biggest observable outlier happens to be the final score. Most games, if pitting fairly matched teams against on another, should be close. That's not the case though. You see many outlier games. You remember them. Why? Because they are blowouts.

And this season the 2013-2014 Utah Jazz are making their fans feel really badly. Why? Well, it's not their fault. They have one of the worst offenses and worst defenses in the NBA. And they've had that for the majority of the season!

It's no surprise that they are getting blown out a lot.

The question is . . . . are the Jazz getting blown out more than usual?

Well, let's define some terms. A blowout is a game you win or lose by more than 10 points. So, if you win by 14 points that's kinda blowing the other team out. On the other hand, if you lose by 30, you are really getting blown out. There are two streams here, two different blowout magnitudes. And I think that's fine.

Okay, so the first thing we see here is that we used to be a really good team. These values include the playoffs, and those games mean the most. They are also the hardest games to be blown out of. Even with an n = 92 games in the first data set ('09-10) the Jazz are blowing out teams a lot. The little blowouts happen 13% of the time, and the big blowouts happen 21.7% of the time. Basically the Jazz are blowing out a team once every three games. By direct contrast the Jazz are getting blown out infrequently: only 8.7% and 5.4% respectively for little and big blowouts.

That season gives way to trading away Deron Williams, and having Hall of Fame coach Jerry Sloan retire. The next four years under Tyrone Corbin were less than impressive (but there are a lot of factors for that, and Tyrone is the best ever, and poor guy never got a fair shake).

Our current season is worse than the inverse of that first season, we're getting blown out by a little 14.3% of the time, and a lot by 26.2%.

In order to establish a norm you have to sum all these years together and find the distribution:

So how does that all compare with this season, so far? Well . . . 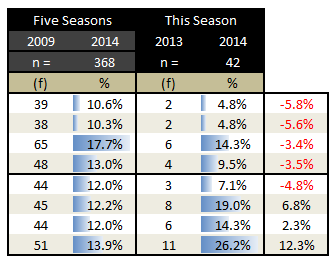 The Jazz are blowing teams out about 10% of the time, instead of 20%. So that's a 1/2 reduction. On the other end we're getting blown out a lot more. Really. It's bad. The one thing that is kinda close is that the value of blowout games (wins and losses, of both magnitude) for the five year data set was 46.7%. For this season alone it's 50.0%. So it got slightly bigger, but it got bigger in the wrong way.

Utah is getting blown out more, more than normal. I'm sure way more than normal if I look back beyond the last 5 seasons, and look at the last 10, 15, or 20 years. I remember Stockton and Malone blowing out a lot of teams. We only have 4 this season in 42 games. Alternatively, we've been blown out more times than we've even had wins this year.

It's not a good feeling, but it's understandable when we have one of the worst offenses and defenses in the NBA. It's, sadly, the least surprising thing about this entire situation.