It's important to get paid in the NBA. It's also important to produce, so that you can keep getting paid. There's a reason why contract year is a real term, when you have to some guys pick it up. Let's take a look at who is producing for the Jazz.

Share All sharing options for: Utah Jazz 40 at 40: Production vs. Payment

Everyone wants to earn the most for their work, especially in a competitive and exclusive industry like professional sports. The market drives the price, and dumb General Managers sign people to contracts that players can't possibly be worth -- as the entire situation spirals into a lockout every few seasons. This season 6 of our 14 players are on rookie contracts, their earnings are fixed to their draft spot and the BRI estimations. One of those guys, Favors, is getting paid next year. The rest of the team are free agents (unless you honor the second non-guaranteed deal for Lucas III). For the season 16 different players have played for us, and two have been cut: Tinsley and Harris.

So, who are the guys fighting for their next contract?

Two of those guys are super young that I'm not even going to worry about (Garrett and Clark -- at the very least they'll get Jerel McNeal contracts to at least make them work out all summer and get cut right before training camp next year. That's the least the Jazz will do. I expect the Jazz to do much more). The other four guys, RJ, Beans, Mad Dog, and, uh, Kareem's Brother, are looking for their next pay day.

So let's look at this team and look at who is producing:

When sorted by how much they are playing you see a strong relationship between minutes and production. The vets in contract years will always want to be able to showcase their talent heading into free agency, and thus, they'd want to play minutes. Two of the vets in question (Marvin and Richard) are both playing more than half the game, every game they play in. And they play in ever single game the team does, save for injuries. Brandon is slowly creeping up in minutes, this month he's averaging 19+ mpg. The one dude on the short end of the stick is Beans -- who is effectively the fourth string center behind Favors, Kanter, and Gobert.

Okay, but still, there are a lot of numbers here, simply this. Okay. I will. I will by using BARPS again, not because I'm playing Fantasy BBALL, it's just the lowest common denominator to show performance. The nerdier I get, the less casual stats fans I am able to retain. I write for everyone, not just math students. So here are the values for BARPS (Blocks + Assists + Rebounds + Points + Steals). I've also included a number for BARPS / MPG. So we get the rate of these traditional stats, and how quickly a player gains them on the court.

When you sort for BARPS you get a different order of players:

Hmm, our top five players here are the F5 guys: Gordon, Derrick, Trey, Alec, and Enes. Then we have the two vets, then Evans and Gobert jump the way up. Some guys are just naturally doing good things out there on the floor. What about BARPS / MPG? Well, when you sort for BARPS / MPG, you see something interesting happen:

Okay, so, wow, how do our contract year vets rank on this? Marvin is #9, which is okay. Rich is #11. Beans is #13. And Brandon is #16. Seriously, Beans is better than him. Of course, Beans has played in only 6 games. Rush is less than 20. So in contract years we see these guys with the big minutes displaying their guaranteed minutes, but little production to show for it. Marvin is doing okay, but he's overmatched at times as a starter.

All of the vets in contract years should expect to save their money this year. I don't expect many of them to make a similarly insane amount next year. Our three highest players this season are all making over $7 million a year. Their value may lie closer to their experience than their production at this point. Both Rich ($) and Marvin make threes. That's important. They aren't 3 and D guys though. So that hurts. Rush isn't a 3 and D guy either. But there is an interesting relationship between how much they are getting paid and how efficiently they are producing:

It's a little early, but if it was up to me I would only bring Marvin back. Still, there's more to look at. Like this graph, for instance: 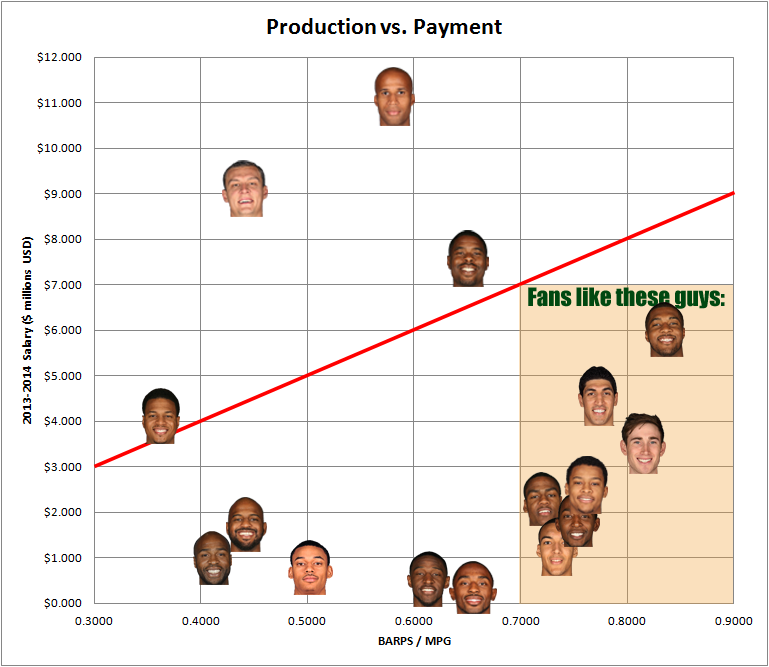 Hmm, what a co-incidence, the players that fans of this blog seem to favor are all a) producing efficiently, and b) producing more than they are getting paid! The best value guy this season for his production was Harris. Marvin and Brandon are close to that red line that shows if you are overpaid or not. Beans and Rich aren't even close.

Oh, and our point guard situation is self explanatory. You get what you pay for. Unless it's an over-paid elderly forward in a contract year . . .