Utah Jazz 40 at 40: The Allure of the Stretch Big, and Marvin Williams' career transformation

Today's dynamic offenses are based around super capable guards and forwards who can drive and get to the rim. This has pushed the bigman farther out of the paint. Stretch Bigs are very valuable. But how many are there? And can Marvin Williams be one?

Share All sharing options for: Utah Jazz 40 at 40: The Allure of the Stretch Big, and Marvin Williams' career transformation

The 2013 - 2014 Utah Jazz have an interesting roster. The majority of players on the team are going to be free agents. Of the player who are returning you have: Derrick Favors, Enes Kanter, and Rudy Gobert -- all land whales; and Trey Burke, Alec Burks, and Gordon Hayward. The missing link is Jeremy Evans. And that's it. Basically you have a bunch of younger players in two groups. You have ball control guards who like to penetrate or use picks to get to the rim. And you have bigmen who are useful for setting screens (or if you are Jeremy, fake-setting one, and cutting to the rim for an oop), and have a limited shooting range that is occasionally up to 16 feet.

The NBA court is more than just a half circle around the rim extending to 16 feet. There's a lot of offensive space that needs to be filled. Invariably when rounding out the roster filled with seven guys who really like to be at the rim (though Trey and Gordon are also good three point shooters in theory), you have to search for people who can do damage outside of the paint. You need players who can spot up, catch, and shoot from the outside. The front office addressed that two years ago when making moves for Mo Williams, Randy Foye, and Marvin Williams. And last off-season they added Richard Jefferson, Brandon Rush, and John Lucas III.

But really, wing players are supposed to be able to make this shot. That is the normative process. And three of the guys coming back next year, Burke, Burks, and Hayward, should all start. That's less minutes for a designated shooter from deep. You're going to have to move beyond looking for wing or guard help here, you need a stretch big.

Over the last 15 seasons (1999-2000 till 2013-2014) the best offensive teams have had stretch bigs. This is not a homogenous group though, there are different types of stretch bigs. Some stretch bigs are just small ball power forwards who are just very tall guards. You could argue that a Durant or Gallinari are these types of stretch bigs. Others are really big guys who out of utility, learned to bomb from deep. Some examples of that are guys like LaFrentz and Hawes. Of course, you always have your foreign players like Nowitzki, Okur, Bargnani, and company. Why did people so tall ever learn how to shoot that well, instead of learning to play defense? Then you have athlete stretch fours as well, like Green, or our own Williams.

But it's more than just being able to hit the three. Some people have made a living out of being able to hit shots from outside of the paint, that aren't threes. In a way you could argue that someone like Boozer is a stretch big. For our purposes we hope that Favors and Kanter will one day have Boozer range on their shot. They'll be able to hit open jumpers from midrange with confidence and proficiency. We're still going to need more. 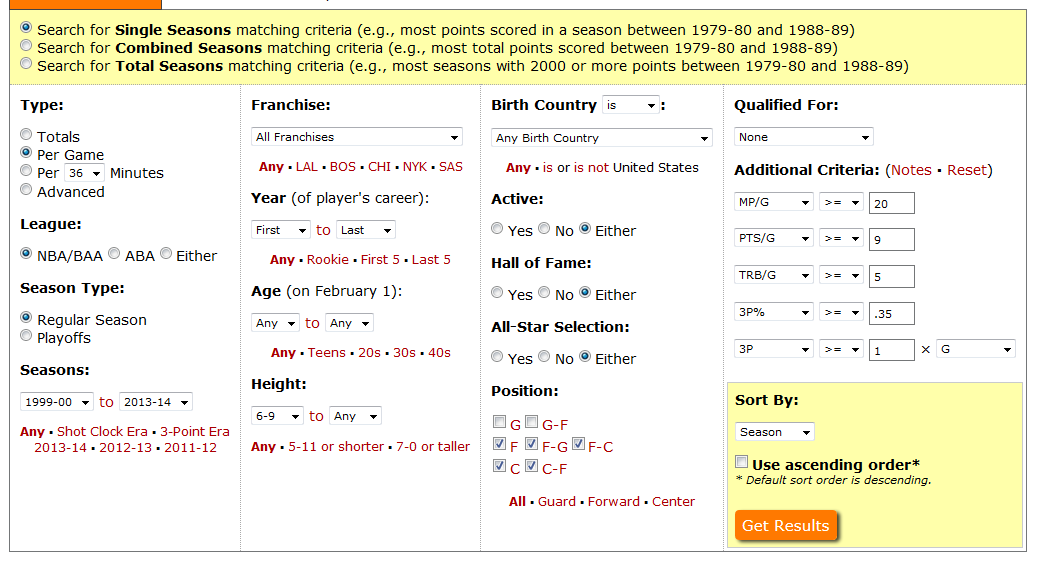 The results I got were numerous. This wasn't too hard to do for some players. I got so many I had to eliminate some. So sorry Mike Dunleavy (3), Hedo Turkoglu (2), Chandler Parsons (2), Peja Stojakovic (5), and Rashard Lewis (9) -- I consider you all more like a wing than a big. No matter how tall and stretchy you all are. [N.B. The number is how many seasons they qualified for this category.]

What I was left with was an interesting group. Most of these guys were tall. I mean, really tall. Few were 6'9 (and sorry 6'8 Paul Millsap, you didn't make this cut). I guess part of being a good stretch big is to be able to get your shot off. The bigger you are, the easier it is to do. Secondly, some of these guys were super specialized. They were big, but they didn't score points or rebound the ball. They shot poorly, but could hit threes. And that was it.

Here are the *career* averages for this group of 20 players, and please note the number of seasons they qualified for this club:

Let's get rid of everyone who has been an all-star and look at this list again.

When you look at the non-All-Star stretch bigs you find that Marvin is right at home. He still needs to shoot better, but the average here is only 12 / 6, and his career is 11 / 5. It's also important to look beyond career numbers and look at career trends.

Marvin is an up and down guy. He's close to being a legit stretch big, but still is lacking by the numbers.

I think he could improve if he played more; but, at what cost? Even fewer minutes for Enes Kanter (who is the right size to be one of those dominant stretch bigs) and Rudy Gobert? It's a tricky situation. No doubt the issue is more complex than floor spacing and winning vs. development and the possibility of a stretch big. I like Marvin. He's my dawg. I want him to succeed, and he may be able to do so -- and not because of coaching -- just because he's finally playing basketball without having a ball stopper hogging up entire zones on the floor (Joe Johnson, Al Jefferson). If Marvin is able to transform himself into more of a stretch big, while keeping some of his athleticism (man, we need to post him up more), he could find himself as a key part of this Jazz team going forward, or on a contender even sooner.