Mark Eaton was so big, and used so well by Frank Layden, that he made tall guys everywhere get NBA contracts without deserving them. Because they all were searching for the next Mark Eaton.

Okay, before we get too far into this I need to point out that Utah Jazz mountain / former starting center Mark Eaton is a dinosaur. I don't mean he's old and obsolete. I mean he's a huge thing that walks on land, can't really jump much, and takes up a lot of space. And it's hard to do anything around him, so you end up having to pass the ball back out to your guards and shrug your shoulders.

Well, he may also be partially obsolete now that they changed the illegal defense rules; but they also added in that Zone defense thing the NCAA's have been using. But getting back on point here, Mark Eaton was big. (Big enough that he can get away with using his height as part of his twitter handle @markeaton7ft4 -- and no one can say anything!) But there's more to it than just that. There have been a lot of big guys in the NBA. Some of them have been horrible. What made Mark so special is the relationship he had with his coach Frank Layden, and how Layden was able to use Mark so well on offense and defense. It was an admirable pairing which forced many other teams to try to find the Next Mark Eaton. Size was always prized, but Mark made it more than a gimmick for the Utah Jazz. Heck, even the Utah Jazz themselves have been searching for year for the next Mark Eaton too!

I don't know if you're read John Stockton's Autobiography, but ya really have no excuse not to because it's $14 bucks on the Kindle right now. And you should, because he reveals a lot of interesting information about the team, the relationships the players had with the coaches, and so on. It's really required reading. I'm assuming a lot of you haven't read it yet so I'm not going to spoil anything.

I will, on the other hand, upload this amazing picture. 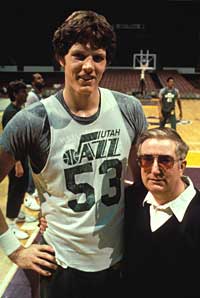 Yes, it's true. Wearing a beard increases your defensive ratings by +20.

Anyway, Mark Eaton was discovered by a scout when he was working as an auto mechanic. He played college ball at UCLA, and was picked by the Jazz in the 4th round, pick #72. (The really sad thing is that these are all things I know by heart.) Mark played for the Jazz for 11 years, his rookie season saw the 26 year old play in 1,528 minutes of NBA action, spread out over 81 games. So there are so many awesome things about this. First, this rookie center is playing 18.9 mpg (Frank Layden >>>), and second, he's a 26 year old rookie. He was a 24 year old college freshman. This is already an amazing story. Derrick Favors is in his fourth year in the league and he's 22.

But the fundamentals of defense have not. And that's something Layden recognized when he had a 7'4 center to play with. Frank has had big guys before, the Jazz have a history of trying to use size. (But our best bigman for a long while was Truck Robinson, who is only 6'7... so that shows you that size doesn't always walk in the same direction as capability.) But all of those other bigmen didn't have what Mark had going for him.

And what was that?

Mark was ridiculously good at being big, but also knowing how to play big. He was attentive on the court, and more proprioceptive than a lot of other people playing center. Some guys luck into it by being big and just showing up. Mark on the other hand had this whole career where his size was a huge disadvantage. Seriously, think about why being 7'4 would suck if you were an auto-mechanic. He had to spend hours and hours understanding space, where everything else was at all times, and be mindful not to wreck everything. At the NBA level his keen senses were still used, but now he was tasked WITH wrecking everything.

And that was the key difference. He understood space because he was so confined by it before he started playing basketball. A guy like Greg Ostertag, who is thicker, but grew up in the wide expanse of West Texas, was always in a situation where he had enough room. He never had to learn about positioning just to get by. That probably explains why sometimes on defense O-Tag wouldn't even put his arms up when other guys shot. He didn't understand space. He just knew he was big. And all of his life being big and showing up got the job done.

Eaton was big, was smart, but still had limitations. Bigmen aren't usually made of the same stuff as pure athletes are. Some are really only big because of Acromegaly -- like our good friend Pavel P. (Remember him?) Big Mark wasn't some giant, but he wasn't an athlete either. He was slow, and couldn't jump, and didn't have the amazing conditioning of some other NBA players. And again, that's why he had to be so smart.

Why did I bring those awards and honors up there? Well, if all you had to do was be big then hundreds of 7-footers would have such a claim to immortality as Mark does. But they don't. Mark was winning DPOY awards back when sidney Moncrief, Michael Jordan, Dennis Rodman, Hakeem Olajuwon and others were playing. AND HE BEAT THEM. TWICE!

And he didn't beat them just because, he beat them because dude was one of the few people who could actually block Kareem Abdul-Jabbar 's skyhook.You may know the Skyhook as the go-to-move for the All-Time leading scorer in the history of the sport. And Mark used to block that.

He did have his challenges on the other side of the ball. I can only imagine how many assists John Stockton would have if Eaton was a better finisher. He is a 7'4 guy who has a career average of 6.0 ppg. He shot 45.8 fg% over his career, and 64.9 ft%. And the biggest headache was with his slow release and geologic gather. Stockton would penetrate and dump the ball off to Mark. On the occasions that he would be able to catch it, it was never a given that he could get the ball up past half of his hemisphere before a guard would come in and swipe it. And that sucked. It sucked for Jazz fans, and for Stockton's numbers, and for Mark's own feelings.

So what did Frank Layden do? Well, he kept moving Mark around on offense. Sometimes he would be used as a screen setter for John. Other times he would be used to cut from the weakside and be available to get an offensive rebound or a catchable pass. On occasion he was used as a post up target, Mark had a hook shot of his own after all. But the most brilliant move was to station Mark outside of the paint so Karl Malone could operate down low. Frank solved the floor spacing problem that Dick Motta's offense never had a chance to deal with. And the rules of that era allowed for so many extra free throws because of illegal defense.

Jerry Sloan inherited Mark and the playbook when he took over. But the rules changed and the playbook was less than effective until they got Mehmet Okur -- a legit big with legit range. Now, once again, there was a reason to run a PF oriented offense while keeping a C out on the floor. But that's a tangent.

Eaton was the reason our offense worked, and people forget that. And he was so big, other people wanted on of their own. Because Mark was so big, and we knew how to use him, the Jazz went nuts trying to get size as Mark's career was marred by more and more injures. Luther Wright was supposed to help out, but he was medically unable to do so. (Mental problems are medical problems. There should be no stigma.) Greg Ostertag was used as the Mark Eaton; but while Mark was big and smart, Greg was just big.

Greg did a good job for what he could do, but he was never a threat to win DPOY. Because of Mark the Jazz under Jerry kept trying to get the next really big, big guy. Kyrylo Fesenko and Kosta Koufos were brought in, but none of them fit the bill. Goofus and Gallant were nice players, but they couldn't hold down the paint like Greg or Mark could. (Fes might have been able to according to the advanced stats, but there was just too much Georgia homeboy in his system to give a damn.)

Sometimes other teams did find themselves a Mark Eaton clone, one of them is dominating right now, and his name is Roy Hibbert. I really wanted the Jazz to get him in the draft, but he was not available when we picked. And because of the continued success of the Eaton template in Hibbert, the Jazz competed the cycle to get Rudy Gobert.

We know Rudy is big. But we need him to ALSO be good. Or failing that, let's work on some knee surgeries for Mark.