Utah Jazz 40 at 40: Does Defensive Rebounding make your defense good, help your team to win, or something else entirely?

The defense doesn't rest until they have the ball back in their hands. The normal way this happens is by playing defense, making the other team miss, and getting the defensive rebound. Is there a relationship between winning, playing good defense, and being a good defensive rebounding club? There should be. Right?

Share All sharing options for: Utah Jazz 40 at 40: Does Defensive Rebounding make your defense good, help your team to win, or something else entirely?

It only makes sense that getting the ball back on defense with a rebound makes you a better team. If you keep letting the other team get offensive rebound after offensive rebound you're going to end up hemorrhaging second or third chance points. Good teams make the opposing offense go one and done. One shot that is negatively influenced by solid defense should result in a miss, and that miss should be picked up by the defense.

The better teams who play better defense should get the ball back more often. And the teams that play better defense should win more games. Right? That's the idea when you look at the fact that the last four (well, 3.5) seasons of Utah Jazz basketball have involved a lot of losing. And those last few seasons of basketball had the team go out there with #27th, #11th (we made the playoffs), #21st, and #19th ranked DREB%. If the team rebounded better on the defensive glass then perhaps the defense over that period (ranked #23, #19, #21, and #29) would be better?

To test this I looked at every New Orleans / Utah Jazz season ever, and plotted the DREB% and the DEF RTG. Forty years is long enough to see some sort of relationship, if one exists with Jazz basketball at all. 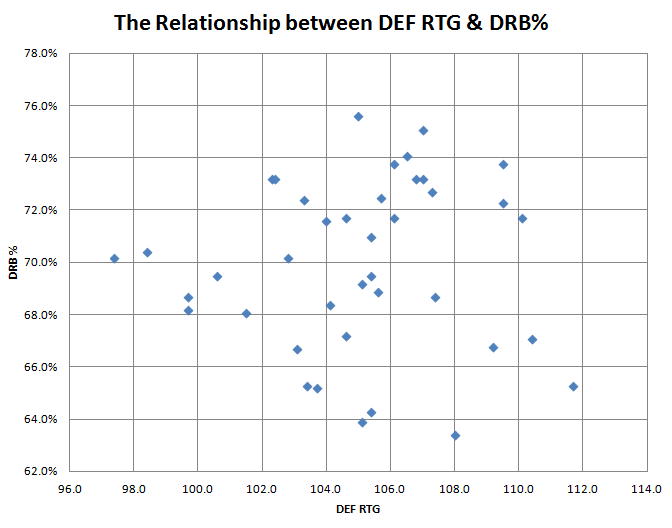 Okay, so. Hmmm. If you squint a little and stare at it for a while it looks like a few squinty blue dots. (I see a figure skater too, but that could just be the brain tumor) I don't see a relationship between these two things by pure value alone. Perhaps we need to look at it by NBA rank instead? 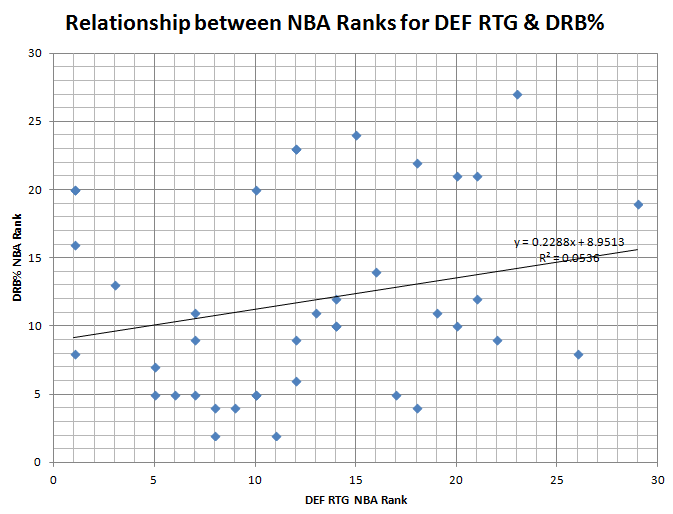 Well, this looks more reasonable; you know, if you ignore the fact that Excel decides to plot the line in the wrong place. There seems to be a more normal line with a slope of 1 if you draw the line from point 1 (8, 2) to point 2 (23, 27). But hey, that's just me and my human brain. If you look at this data it seems to suggest that if you don't take care of your glass, in a relative sense compared to the rest of the league, you will have a similarly poor defense.

What about looking at winning % and DRB %? Is this easier to follow? 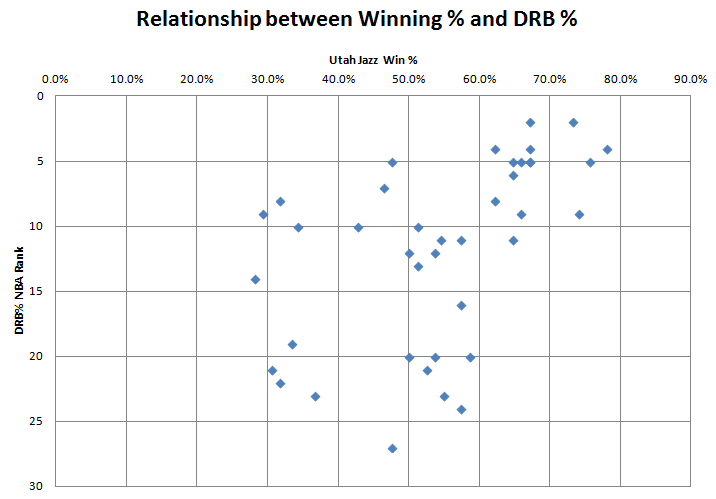 Now this looks normal-ish. You win more the better ranked your DRB% is, but not necessarily winning more compared to your DRB% alone. I guess this is because winning isn't your team against history, it's your team against the other teams that season. So being better relatively at something is better than being awesome overall. After all John Stockton is better than Steve Nash, but Nash has two MVPs because he was relatively the best player in the league twice. Not because he was one of the best players ever. It's the same principle here.

Where does that leave our Jazz team? Well, our DEF RTG is ranked #29, and we are losing a lot of games. And compared to the rest of the NBA, we're almost in the bottom 1/3rd in DRB%. When we were getting a lot of our defensive boards (see 1994-1999) the team had one of the best stretches for DEF RTG and won a lot of games too. BUT when the Jazz had their best ever string of DEF RTG teams (1984-1989) the team had a really bad string of DRB% and struggled to win 45 games a season.

I guess what we learned is that being better than your peers is better than being good. And if DRB% is such a huge problem this year, why the heck are Jeremy Evans (19.9 DRB%) and Rudy Gobert (31.5 DRB%) sitting? Derrick Favors (24.1 DRB%) can't do it all his own!