Taking a look at what's normal from the data set of 1999 till today. Hint: It's not what you think.

One of the fables we were told was that the previous coaching regime was at a significant disadvantage because of roster turn over. I investigated the truth of this by looking at the last 16 rosters of the Utah Jazz, season by season, from 1999-2000 till today. More of my method and reasoning can be found here, and my individual breakdowns on point guards, wings, and bigs have already been posted. Now for the fun part -- putting it all together.

But first, a recap of what we learned from the individual position group breakdowns:

That's all fine and dandy, but you have to add it up. So I did.

Again, for the data set we did not include any player who was on the roster but did not play a single game that year. And that the players are ranked by total minutes played, for example, Randy Foye led all wing players in minuted played in 2012-2013, thus he is listed first there. 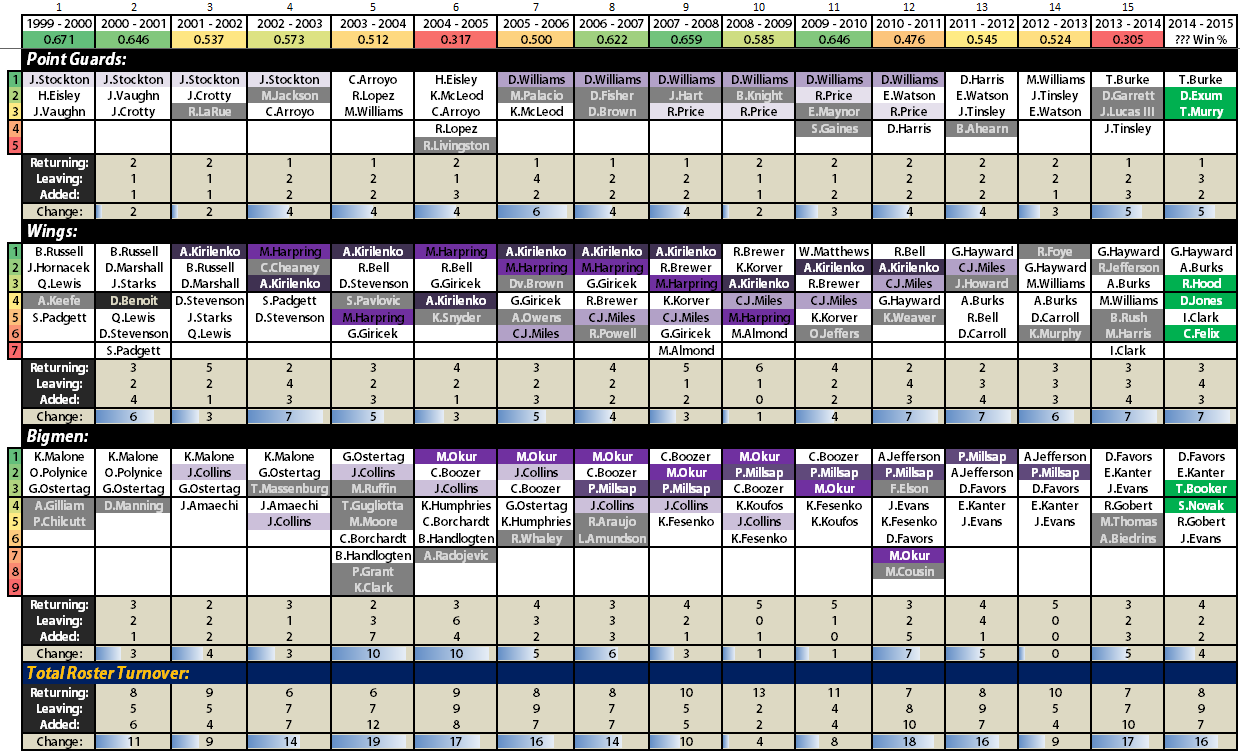 A casual relationship appears to exist between high roster turn over and poor performance. This is due to injuries to players who would normally be in the rotation, and then have to be filled in for by inferior talent. It wasn't by design in 2003-2004, but in 2004-2005 the team needed to patch a lot of the ... wait a sec. I didn't count Borchardt for both years. The actual change should be 4 returning, 5 leaving, and 3 added for the bigs, meaning a bigman change of [8] and not [10]. Oh well. The good news is that the sample size is large enough for a [2] difference to not actually make any difference in the big picture.

Anyway, periods of stability mean the team as constructed by the GM is working pretty well. This is what we saw in the middle Deron Williams years. We also saw some level of stability returning to the "All in with Big Al" years as well, despite #Molo being something to worry about.

The change, overall, happens at the bottom of the roster for the most part. We don't worry about it too much because with the wings there are 3.5 guys returning from the previous season, and with the bigs we don't worry about it too much because (updated value) there are 3.6 guys returning every year -- and those guys are usually the Top 3 bigs on the depth chart. Of course, there's the illusion that point guard is similarly placed, but the reality is that there are regime changes there of late, with each of the last four seasons having a different starting point guard (Deron Williams, Devin Harris, Mo Williams, and Trey Burke). If Trey holds on to the starting PG role (and he should) then it will break the cycle. Compounding that banana republic like series of coups is the fact that every 2-3 years we have a completely new set of back up point guards as well. What we perceived to be stability is actually masked by having John Stockton and Deron Williams for so many years. 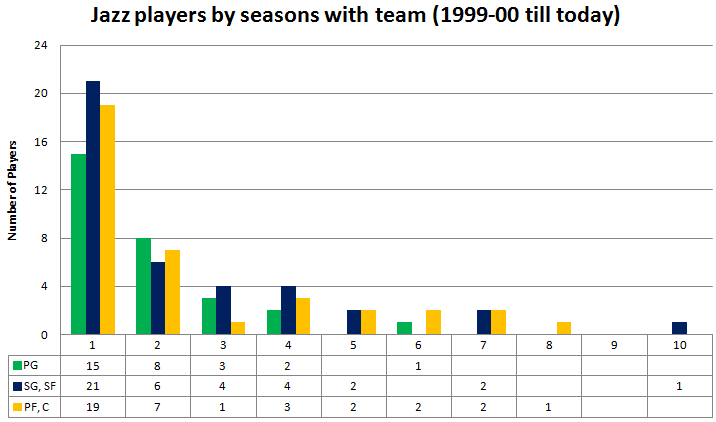 The major outlier here is Andrei Kirilenko (SG, SF who played 10 years with the team during the last 16 seasons), then Jarron Collins (PF, C who played 8), and then the fun foursome of Matt Harpring, C.J. Miles, Mehmet Okur, and Paul Millsap (all playing 7 years, two at the wings, and two at the bigs).

The overwhelming "majority" here are people playing 1 or 2 years with the club. I would guess this is related directly with how it goes with all the other teams in the league as well since lo these last two lockouts. (Did I just use "lo" in a sports blog post? Yes. Did I use it incorrectly? Almost definitely.)

But let's be real, these high turn over players are bottom of the totem pole, and most of the time, aren't leaving the Jazz to have long careers in the NBA. The only exception here is Wesley Matthews, and possibly Sasha Pavlovic out of the "one and dones", and out of the "two and dones" only Mo Williams really counts. The franchise will survive having Mark Jackson or John Starks or Kris Humphries or Pete Chilcutt for only a brief moment in time.

Probably the most interesting thing is that point guards (green) usually all die out by four years, Deron Williams was the outlier here for his position class. But really think about it, besides him EVERY point guard who played for the Jazz since 1999 was out of the franchise within four years. Either there is less patience with them, or that they bring in players who have marginal talent and thus aren't long for the NBA.

Change is essential for all teams, and more change has been seen in recent years because of the new contracts that are a result of the last two lockouts coupled with General Managers deciding to use more and more of their roster slots each year. These NBA trends are reflected with how the Jazz have done things as well. The increase in change in recent years is a product of larger roster sizes and the influence of adding more people on 10 day contracts during the season (Blake Ahearn, Kyle Weaver, Marcus Cousin, etc); but you can't forget that in an effort to maintain flexibility, trading for guys in contract years means inherent change is inevitable. This is punctuated by the near-constant turn over at point guard where the four previous seasons all had a different starter by the time training camp arrived (Deron Williams, Devin Harris, Mo Williams, and Trey Burke).

While there has been more observable change and roster turn over in the last few seasons than we would ever want, it's important to use this larger data set as a frame of reference. The upheaval isn't the worst it has been in the modern, post-Stockton and Malone era. Recency bias makes us think that it is, especially with the "Rent-A-Vet" strategy that our former head coach fell in love with. (I sure hope Tyrone Corbin isn't also paying for a CD from Columbia House every month still.)

The main culprit will always be injuries. And while change is a product of the way rosters are constructed now, the Jazz still did have nearly 9 returning players every season. And while the team has averaged only 8 returning players in the last five seasons, it's still not that bad.

My conclusion is that the use of "roster turn over" as a crutch is overblown. Everything that has happened has happened mostly within ZERO and ONE standard deviations, over 16 years of ups and downs. The only way to really make the last five seasons appear to be supremely adverse situations is to expand the data set to the last 40 years, where the contract lengths and GM strategies were based upon the rules and norms of the NBA four lockouts ago, and not two.