Do you know how much these guys have played?

I'm going to keep this simple because a) I'm not good enough to write it in a complex way, and b) the information here speaks for itself. This season the Utah Jazz were somewhat embracing that this was a transition year. "We're not bottoming out, and we're not a really a playoff team, we're somewhere in-between." - Randy Rigby after truth serum, probably. If that's the case there are three things to keep tabs on.

I think that the win/loss record gives us a fair indication of how good the team is on any given night, but looking at how the team plays -- quarter to quarter -- shows so much variation. Moreover, I believe that how good we look is more a product of who we are playing, and not who we are right now. The win/loss record also help establish that we appear to be right on target for enough ping pong balls in June. Or at least, I hope. (Coin flips have been bad to us, historically.) The most difficult thing to assess is if we're getting better. This is a multifaceted problem dealing with too many things to even list. It's hard to grade a quality, but much easier to look at numbers. And the numbers say, in a clear voice: maybe.

For the majority if the sane world there are five players to really worry about on our team: Derrick Favors, Gordon Hayward, Enes Kanter, Alec Burks, and Trey Burke. There will be sufficient turnover this off-season as there are plenty of free agents. There will also (hopefully) be some new rookies. But it's these five players that we should care about most. Favors just signed a big contract for a lot of money. Hayward is a restricted free agent this summer. Kanter and Burks will be up for an extension next year -- and hopefully get one done before October's deadline arrives. And Burke is the most immediately marketable player on the team.

It really boils down to: "how well do these guys play with one another?"

That's the fulcrum for this entire off-season. And for the most part, it's been an after-thought to trying to get wins. (Which shows a lack of congruence with what the front office has to worry about, after all, it was the mirage of winning now that set back the rebuild by three seasons.)

One idea here is that the Jazz have had so many injuries that it's impossible to get all five of those guys on the floor at the same time.

More bad news: the minutes are inconsistent. But the good news is that they are going up!

Corbin goes games and games, weeks and weeks, without playing them when they are healthy. (N=37 out of 64, remember) Only once this season they've played more than 12:00 minutes of a game together. That was against the Washington Wizards on January 25th, a win. Of course, learning doesn't happen on this team, and when we played them again they played only 9 seconds together. But at least the have played together in five of their six last possible appearances. Before this stretch Corbin had them not play with one another for 7 straight games. 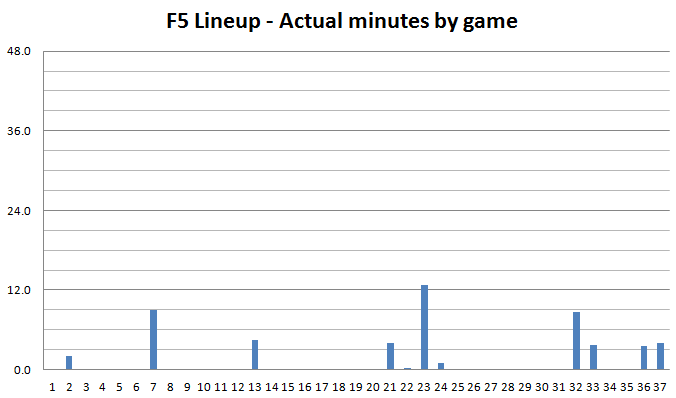 The recent trend is nice, but this barren landscape still shows how infrequently this lineup was thought of as something useful. But hey, let's focus on the positives -- it's an upward trend! 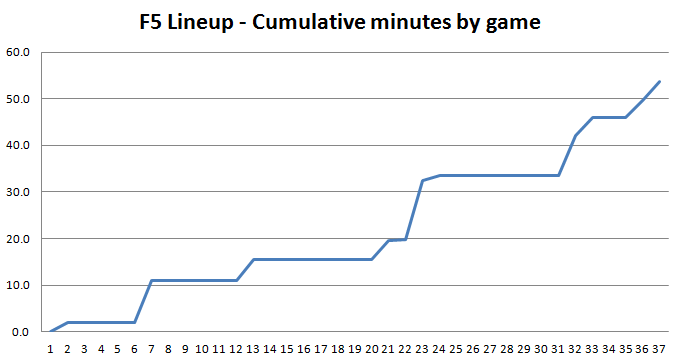 See how quickly it's rising! The most recent slope is super high, right? Well, no. Even though they are playing more now, there was a larger jump earlier in the season (games against LAL and WAS in late January) than there is now (early March). It's nice that the numbers keep going up, this is the nature of this cumulative chart.

The biggest thing you do see are all the plateaus. The increases aren't consistent, which means that the playing time of this lineup is inconsistent. It's almost as if someone is TRYING to not resort to playing them together. Either that or this is a great piece of statistical 'luck'.

So they're +1 in about 54 minutes. Is that good? According to the NBA.com data (again, rounding errors) for units that have played 50 minutes together this season we have this:

The TBABGHEKDF lineup is one of only FOUR that has played at least 50 minutes together that has a positive +/- value. And if you rank them by their +/- value per minute played they appear to be only slightly off of the one that the team starts with. But, well, we have 10x more the data sample size for that group. They've played 500+ minutes, this group is at 50+. And the difference is +0.02 in +/-. I think we should get more data on the control group.

And if you make a lineup with Jefferson and Williams as the control group then you really have no idea how free agency works. (Or history -- I'm sick of the revolving door free agent starters like Mo Williams, Randy Foye, Josh Howard, Raja Bell (qualifies), and so on.)

So, the Jazz front office needs to quickly make decisions on Hayward, and figure out if they should extend Kanter and Burks. They just drafted Burke and he's in his first year of his rookie deal, and Favors just signed his first big contract after his rookie deal. And, oh yeah, we have a whole OTHER draft to worry about and then free agency. It would have been nice to know what these five guys can do together -- instead of having to go into this off-season with even more uncertainty because of, well, negligence? Am I saying that the NBA needs to bring in child protective services to take these talented young lotto picks from the Jazz? No. I don't need to say that. Capitalism and how you treat them will determine if they leave on their own or not.

I'm happy they're playing minutes with vets who are going to be leaving the team. I'd be more happy if they were playing together and being used as the control group in a risk-free season of development and discovery.

But by not much.

So in the year before an important off-season these guys are more questions than answers for the Utah Jazz front office. And it's not their fault. I think we know where we can, once again, point a finger. (It's the fans, according to some people, which is hilarious)