The Utah Jazz franchise has a problem with threes. We don't take them, and most seasons we don't make them. This season two players are doing a good job and part of an elite group. But they need some help, from the rest of the roster and the playbook.

Share All sharing options for: The Utah Jazz can't count to three

It seems like every few years we have to talk about the three point shot and the Utah Jazz. The three point shot has been a part of the NBA for decades, yet some teams seem to shun the use of it. NBA offenses have evolved over time, and so too have the talents and skills of NBA players. Some coaches are still in the stone age. And some players look like they are just chucking up bricks from outside. When a team that has Xs and Os that don't look for the three, and has players who can't make that shot -- it's a match made in heaven. But it's a match made in heaven for the defense.

There have been some really good three point shooters on the Jazz. We've had Kyle Korver, Jeff Hornacek, Mehmet Okur, Randy Foye, Mo Williams, Bryon Russell, Darrell Griffith, Raja Bell, Kelly Tripucka, and John Starks to name a few. Wesley Matthews and Dell Curry also played one season here. Oh, and that John Stockton fella too. Similarly, there have been some really good plays, either set ups or in the flow of the game, that the Jazz have used for threes. There's the simple drive and kick, or the ball rotation after a post double team -- all teams do this. But we've also seen great set-ups, like Jerry Sloan 's one play that he added to the playbook (I actually don't know who made it up) to combat zones that we saw back in 2010-11. I watched that set up in Synergy a million times and it's where a player initiates the play at the top of the arc, then runs to one corner, then sneaks his way to the opposite corner. He inevitably gets lost in the shuffle as the zone defenders have to keep up with the rest of the Jazz Flex offense. It produced an open shot the majority of the time -- it's just that the guy who was open ended up being C.J. Miles during the season where he shot really *really* poorly compared to his career average from deep.

I haven't been convinced about the out of time out plays to set up three pointers, but we were able to always get some okay looks back during the Memo days. Most of the time it seems to just be an isolation, which is where we got #MOLO from. 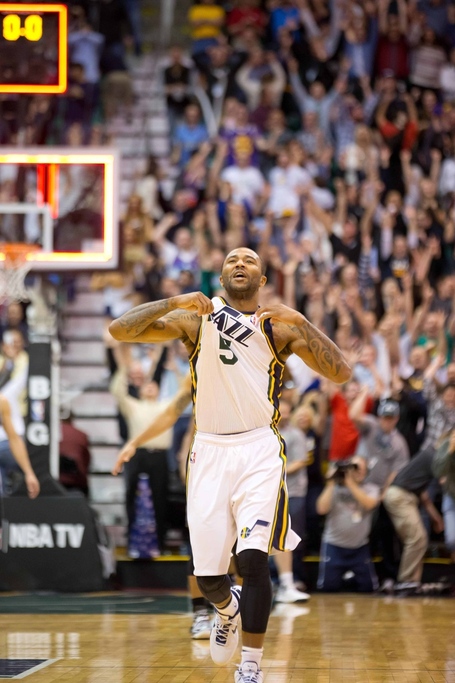 The game today is increasingly wing oriented. The point guards play like shorter shooting guards who are shoot first in mentality. And the bigmen are playing more and more face-up and spreading the floor. The focal point here seems to be wings. And in this league you have to be able to hit the three now, no matter if you are a two or a three. (Or a one, or a four or whatever) So let's look at the players this season who are wing guys who are a) playing in games, b) taking threes, and c) making threes.

This fully discounts things like MPG, or defense, or getting to the line or whatever.

These are the NBA players who have played in at least 50 games this season, take at least 2.0 threes a game, and make at least 35.0 3pt% from downtown. I have eliminated some players due to their height or primary position.

These players are ranked by 3PTA per game. From this group we see some interesting things. The first, most obvious one, is that there are only two Utah Jazz players on this list, and they are ranked #31 and #32. There are 30 teams in the NBA, and we don't even have one guy in the top 30. We do have two right on the bubble. (But we'll get into that later) For this elite-ish group RJ is shooting well, 41.9%, and Marvin is shooting okay 37.7%. Some of these players are primary options, some are secondary, and others are just guys to fill in the gaps and to stretch the defense. Overall, though, the average is shooting 38.7% from downtown. By this metric RJ is above average, but Marvin is not. (And against, this is for the best three point shooters in the league)

To be one of the best three point makers (and the good offensive teams have these dudes) you need to do more than just make a high percentage (one season Greg Ostertag was 1/2 from downtown). You also have to take enough to be a threat. The average for this group is to take 4.2 threes a game. That means the cut off point by average is between CJ and Ray Allen. We give Ray a pass though because he's always dangerous. So if the cut-off for being used enough as a thread it 4 threes a tame our two best makers aren't quite there. They are both in the three threes a game and change group. Still very deadly I think.

Of course, getting back to the point I skipped for now, a big part of this is pace. Klay Thompson is tops on this list and his team plays at a high pace. He also makes a ton of threes. He's high use, high volume, and during the off-season just plain high. (Now that's a call back.) The Jazz play at a slow pace and each basket we get isn't easy, and a product of a lot of moving parts. I'm not crazy about the current Coaching staff's Xs and Os. Other teams seem to be getting more from their deep threats than we are. And as a result, they are much harder teams to guard.

This doesn't look like the end of the world but let's go over it point by point, player by player:

I guess that's the bottom line, a threat is only as good as how bad it can hurt. I don't think anyone feels like keeping Alec Burks open from downtown is something that's going to hurt you. He may make a few, but he's not elite. He's not like a Ray Allen or J.R. Smith. Those are guys, regardless of how they are doing in a game, that I feel like will make every open three pointer they get. I don't think Alec is ever going to get there. I do hope that Trey and Gordon do get there. It would not just greatly improve our team, but also allow for our Xs and Os to also advance and develop with the course of evolution the game is taking.

I would also love it if Ian Clark can get to that Brandon Rush level, or better, by being someone with the reputation of being able to make threes when they count. I'd also love a pizza right now, but wanting something and having it happen are two different things.

While RJ and Marv may not be long term Jazz players in the future, have their struggles on defense, and are some of the least impressive starters in the NBA right now -- they both do something that no one else on the team is doing right now. They are reliable three point makers who qualify to be in this elite 50 person group (minus 5 bigmen). A few seasons ago the Jazz had no three point threats. This season we at least have two. And I can only imagine how much worse our offense would look without them.

So thank you RJ and Marvin for making open threes. Hopefully next season guys like Trey, Gordon, Alec, and Ian will be able to come close to joining this club. Also, fingers crossed, we run some more plays for threes as well. Diversifying the offense is more than just plugging in a different bigman to post up on the left-block.