NBA Strategy: Not all three point shots are worth the same

The Jazz have a love hate relationship with the three pointer. I seem to be increasingly fixated on the collective need to make them. Let's take a deeper look at three point shot, and why some three points shots shouldn't be taken.

Share All sharing options for: NBA Strategy: Not all three point shots are worth the same

Everyone has talked about three pointers a lot this season. TV guys, radio guys, beat writers, fans, bloggers, whatever you want. I don't remember a season more three pointer focused than this one. There's a legit reason for this though. The three pointer is here to stay in the NBA because the teams that win championships in this modern era are ALWAYS the ones who can make that shot regularly, and when counted on. The Miami Heat don't have titles without Shane Battier, Mike Miller, Ray Allen, and even Chris Bosh and LeBron James doing damage from downtown. The San Antonio Spurs have tons of players who can take, and make threes. From Bruce Bowen to Kawhi Leonard. (And everyone in between). The three point shot is important for success. And that's why I've focused on it a little bit this season: the allure of the stretch big; spot up shooting; and the 50 / 2.0 / .350 club. And we're talking even MORE about it today!

I don't think each three point shot attempt is an actual three point shot opportunity. You don't need to look any farther than Utah Jazz guard Alec Burks -- who has taken 17 end of quarter heaves this season. (According to @Statcenter that puts him 2nd in the league for FGA from 40+ away). If Alec didn't take those three point shots he would be shooting 39.8 3pt% this season. His values look even better when you recognize that way too many of his threes (11.2%) come in Isolation plays. And these aren't real Isolations, like what Kevin Durant gets, when they give him the ball with 15 seconds on the clock and clear out a side. Far and away the majority of the isolation three point attempts are bailout shots to beat the buzzer. I'm not kidding, this is the case for a number of our players -- the play stalls and they rotate the ball out on the perimeter. A guard gets the ball with 3 seconds or less time on the clock, and they "isolate" for a few heart beats before jacking up a shot that misses. Skipping ahead, and looking at Alec -- he's 2/14 in "isolation" threes (when I ran through the plays only about 3-4 of them were legit isos where he gets the ball with time on the clock) and 0/17 in end of quarter heaves.

These are not good three point shots. They run his average down, but they aren't likely to net points at all. In some cases taking the 24 second shot clock violation is BETTER than a rushed three point shot from isolation because it prevents the other team from getting a running start on a counter attack. Of course, no one wants to eat up a turn over either. In a perfect world you have an offense that works and you make your threes.

Utah has not been that world for a few seasons now.

So let's look at the top nine players on the roster who take threes:

It's not that impressive. Only three players are sniffing shooting 45.0 fg%, and only three are shooting 36.0 3pt%. Trey Burke, who I said a while back is ostensibly our best three point shooter, just had a huge made three in our last game. He won the game with that shot, but that's nothing. People who disagree with me are very quick to discount the points I make, or invalidate the data I present. It's easy to think you won when you plug your eyes and say "nahahahaha". That doesn't get you a win in real life. And taking bad shots doesn't get us a win on the court.

If you look at the data averages per game you get this:

There are five guys who are close to average 10 points per game. Some of them are more efficient with their shooting than others. (Duh!) But a big factor that can equalize should be the three pointers. Four players on the Jazz take 3.5 threes attempted a game. For the most part they are shooting "okay" from there. There are some guys who don't take a lot of threes, but are also okay from there -- like Clark and Rush, even Alec too. One guy who doesn't shoot a lot if Diante, but maybe his numbers are so efficient because he keeps the sample size low? I don't know.

What we do know is that . . . . the numbers need to be broken down better. 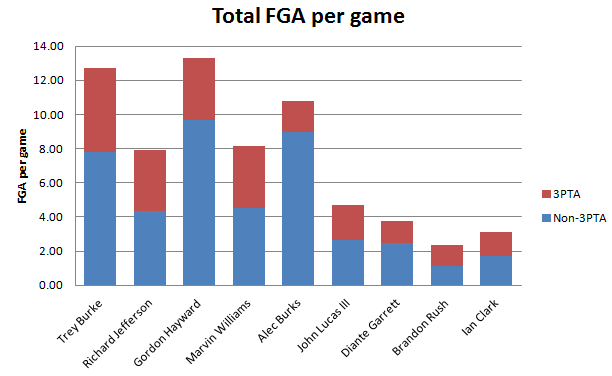 Here we see who takes the most shots, and how big a part of their offensive attack is from outside.

Four players take 45% of their FGA from downtown: Rush, Clark, RJ, and Marvin. Their role in the offense seems to be just about spacing the floor. In a perfect world they would be like the Mike Millers / Shane Battiers on our team. Except for RJ (as we saw in the last post), everyone else doesn't really fit that performance mold. Alec and G-Time don't take the most of their shots from outside. Diante takes 1 in 3. TREY is the important guy here because he could easily just become a jumper shooter like Jameer Nelson -- or he could go in the other direction and focus more on shots at the rim like Tony Parker. Both strategies are valid. But I think we know which one wins titles.

But these are just those simple values of threes. As we saw from the beginning with how Alec's actual three point ability is skewed by taking dumb shots we can extrapolate that this is much the same for the rest of the team. I've broken down the three point shooting of our five most frequent three point shooters (by total season 3PT FGA), and further divided it by play type. It's not every play type, but it's a few of the important ones:

RJ is a maestro coming off of screens. We should do this move. Hayward has been awful at it. He has made 10 fewer threes in this situation than RJ, despite shooting one more attempt. There's not enough data on Trey Burke here or in the D.H.O situation. But Gordon is good at D.H.O. -- he's shooting better from there than on spot ups this season.

The last card to fall here is transition. Everyone shoots better in transition than they do normally. It's just not a big part of what we do.

When you look at the proportional values, you see that each player's three point attack is MOSTLY made up of spot up shots. We rarely get any off screen action, D.H.O., or transition attempts. This is, well, normal. And while it's normal it's something a lot of other teams are looking more at. I'm not saying spot up less. If anything we should ISO and P&R less. For this group they are 8/31 in Isos (25.8%) and 30/94 in P&R attempts (31.9%). They are much better at D.H.O, and Transition. It's not even close. Of course, you need to be in transition to get transition attempts, but under Tyrone Corbin -- a team that starts a SF at PF -- this team has decided to play at one of the slowest paces in the NBA.

So what does this mean? It means that not all three point shots are worth the same. Some are functionally useless (half court heaves -- unless it's a close game), some are systematically useless (those 2-3 second on the clock heaves with a man in your face), and within the ebb and flow of a working system, some of our players need to cool it on where they shoot from.

For the most part I love what RJ and Marvin can do with the three point shot from a spot up situation. G-Time needs to fix his spot up shooting. Alec needs to stop with the "look at me, ma!" shots. RJ needs to come off of more screens. And if Trey is going to be more than just the guy who SHOULD be our best three point shooter, he needs to hit the P&R three, take more spot ups!